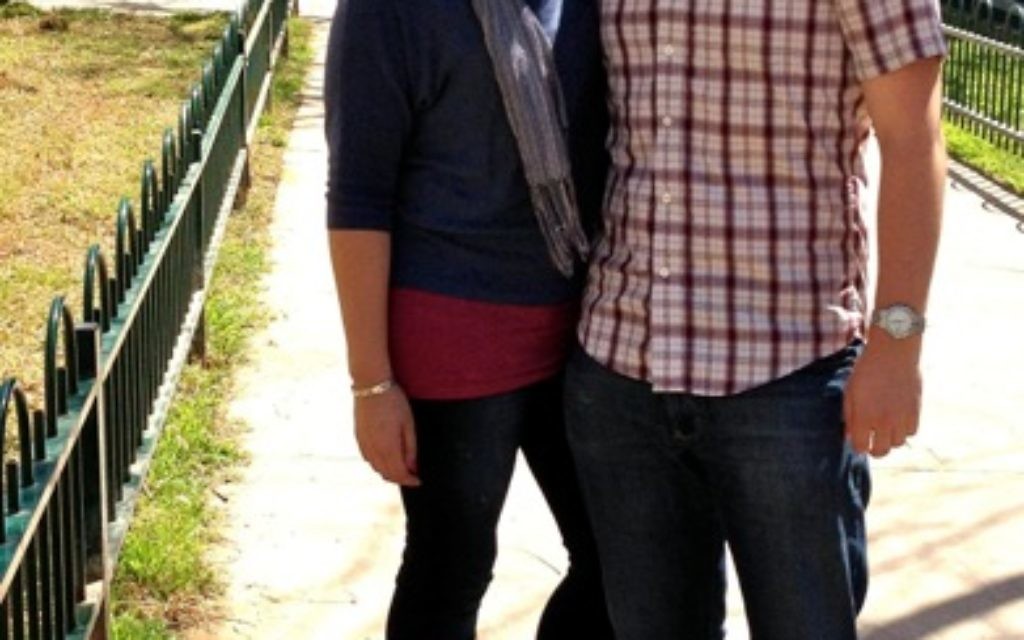 Eliav Rodman and Maor Shaffin were both regional directors for the World Zionist Organization when they met at a staff training session in August 2010. “I thought she was cute,” says Eliav, “and I proceeded to chat her up. But she blew me off.”

Maor retorts: “The next day, I did give him half of my banana.” Then they parted – Maor returned to Los Angeles, and Eliav remained in New York.

The following November, they were both working in New Orleans at the three-day General Assembly of the Jewish Federations of North America, also known as the GA. They arranged to meet that night at a bar on Bourbon Street.

Maor and Eliav, who were then 29 and 28, respectively, agree: Since they were colleagues hanging out together, there was no “first date pressure.” It worked.

As soon as she landed back in LA, there was a text message from Eliav. Their long-distance relationship was beginning. Soon Eliav was thinking about flying out to visit her. He consulted with his friends – they encouraged him to go. “It’s a story for your grandchildren,” they said.

They had four wonderful days together. “Eliav is my mirror image,” says Maor. Maor was born to Israeli parents and grew up in the San Francisco Bay area speaking Hebrew at home. Eliav was born in Jerusalem to American parents who spoke English at home.

Eighteen months before she met Eliav, Maor had made a list of the ten must-haves in a partner. “Eliav had every quality,” she realized. “He’s friendly, loving, intelligent, cute and a really good person.” And what does Eliav think about Maor? “She’s perfect.”

Eliav moved to Los Angeles for the “perfect woman.” As a former intelligence officer in the Israel Defense Forces, with a BA from the Hebrew University in international relations, and several years of administrative experience, Eliav had no trouble finding a job, and started working in social media.

Serious hikers both, they got engaged on Sunday March 11, 2012 on a beautiful trail in the Pacific Palisades. As Maor began unpacking the wine and cheese, Eliav knelt down in front of her and proposed.

Soon they had many decisions to make – for their wedding, honeymoon and their future.

They decided they would make their home in Jerusalem, and Eliav would pursue an MBA at The Interdisciplinary Center in Herzliya, while Maor would look for a job. Her resume includes an MBA from Bar-Ilan University and jobs like Hillel program director at Stanford.

Before moving to Israel, the avid travelers would splurge on their honeymoon, and planned a six-month adventure in the Far East, including, Cambodia, Vietnam and Laos.

But, first, they had a wedding to organize. Maor had received her BA at the University of Judaism, and that would be the venue for the wedding – in Brandeis, California, with breathtaking mountain views.

Eliav’s father, Rabbi Peretz Rodman, officiated: “I picture our families passing each other somewhere over the Atlantic twice each summer in the ’80’s and ’90’s as you, Eliav, are brought from Israel to America, and you, Maor, are brought from America to Israel.” Truly, a match made in heaven.

Dr. Leah Hakimian currently researches the question: How Jewish couples meet and marry. In the 1990’s she founded two nonprofit Jewish matchmaking programs, and continues to champion the role of community in helping singles meet. She resides in Jerusalem and Great Neck, New York