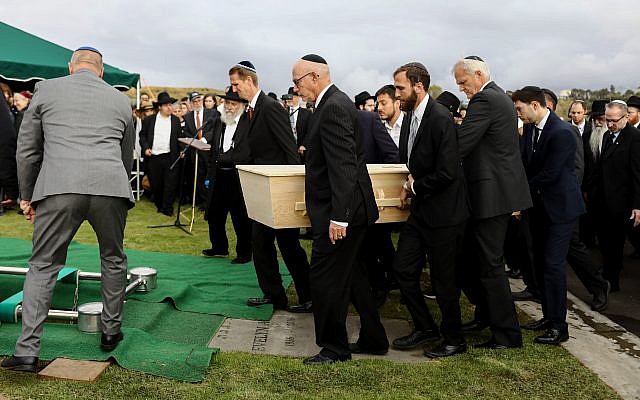 Pallbearers carry the casket of shooting victim Lori Gilbert Kaye during a graveside service on April 29, 2019 in San Diego, California. Lori Gilbert Kaye was killed inside the Chabad of Poway synagogue on April 27 by a gunman who opened fire as worshippers attended services. Getty Images

Just in the last 20 years, American society has had to deal with countless losses at the hands of gun violence. Whether it was Columbine, Sandy Hook, Virginia Tech, Parkland, Las Vegas, Pittsburgh or New Zealand, there has been a vicious cycle of violence and sorrow that has not been broken. We seem to find ourselves in constant thought and prayer for the victims of these tragedies, as though thoughts and prayers will stop the bullets from flying.

We have been told that the problems that cause these acts are complicated, or that they are rooted in hate. This may be true, but hate did not kill people in a California synagogue a few weeks ago. Blood was not spilled by racism or Nazis this weekend. It was a gun that ended the lives of innocent souls that day, as it has for thousands of other lives over many years.

The recent shul shooting is the straw that broke the back for many of us, particularly in the Jewish community. Pittsburgh should have been the last time that life was lost inside a synagogue. We swore that it would never happen again, that there would be changes. But nothing can change while neo-Nazis can buy the same weapons the Marine Corp can. It is time to stop the free flow of guns in our country once and for all. We must have stricter regulations and tougher laws to stop this carnage, for until this happens every American life lives in the shadow of the valley of death.

In a land where we champion life and liberty, how can it be that in our places of worship that these acts occur? This shooting must be a wakeup call, a turning of the tide in a long struggle for life. For if not now, when? If not us, who?