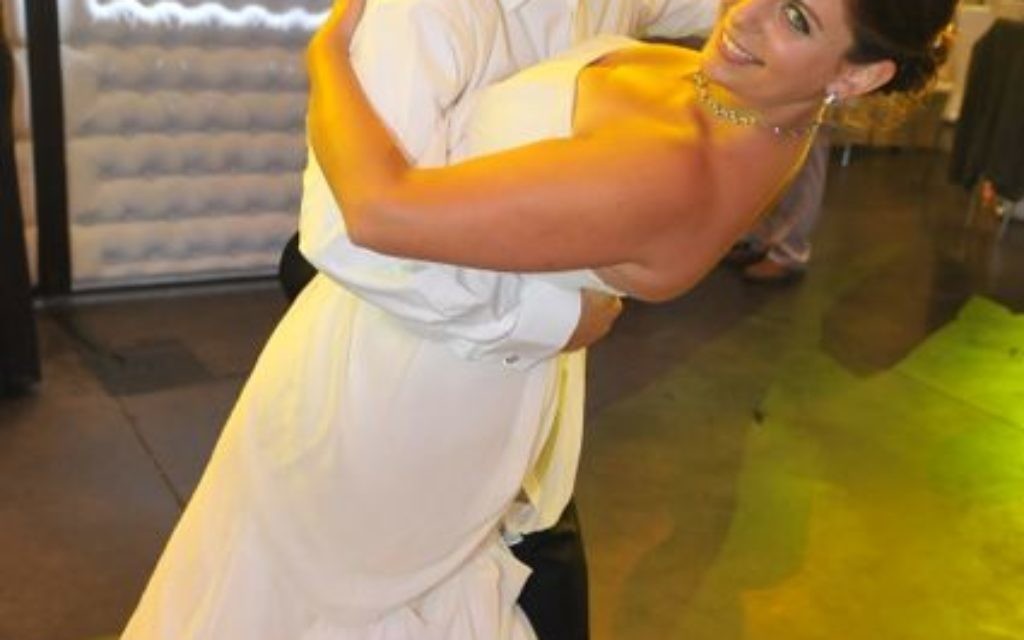 “My mom encouraged me to join JDate,” says 33-year-old Leon Smulakowski, an amateur weight-lifter, who can break an apple in two with his bare hands.

The last day of his subscription to the dating site – he was going to cancel – he saw Joanna's profile. “It was her beautiful smile that attracted me,” says Leon. He messaged her.

Joanna Sirlin, a violist, was in Florida on a symphony tour. She had been on the dating site for a while and had learned to analyze profiles. “I picked up on his sense of humor.” She liked that Leon didn't take himself too seriously – the profile was not in resume form.

They talked on the phone almost every day for about two weeks, until Joanna returned to New York.

Joanna was a native of New Rochelle, New York. Leon was born in Russia, moved to Israel in his teens, and came to New York after army service; he worked in the Israeli consulate.

She had been to Israel once, on the Birthright program; had a master's in viola performance; and lived on the Upper East Side. Leon lived in Queens and was working on a degree in nutrition.

Joanna, like many of her colleagues, had mostly dated musicians. Not everyone would accept the hours that a serious artist needs to practice. It was a non-issue for Leon.

Her passion for music was matched by his for weight lifting. For her it was “refreshing” to date someone outside the music world. Their first date, at a Manhattan wine bar, lasted for about four hours of talk.

Leon didn’t follow the “guy rules” to wait three days before asking a woman out for a second time. That night, he invited Joanna to the Passover seder of a friend in Queens. Joanna canceled her other plans, and went. After the seder, Leon escorted Joanna home, though it meant an extra round-trip subway ride. “That night, I got an up-close look at Leon’s priorities,” says Joanna. “I realized he was a very kind guy and he believed in family first.”

After almost a year of dating, Leon got down on one knee and proposed. They were walking across the Brooklyn Bridge. It was 11 p.m. on Valentine’s Day. “Of course,” she said.

“Everyone knew except me,” says Joanna. He had called her parents the day before.

Her younger brother, Jonathan, composed music for the wedding in Bryant Park on June 12, 2011. Her friends were the musicians. Her cousin, Rabbi Daniel Treiser, officiated. It was his first time to welcome the couple in Russian. Leon’s friends did the translating for him.

Though her in-laws came to New York for the wedding, Joanna wanted a ceremony in Israel, too. Two months later, they had a celebration in Caesarea. Leon’s mom arranged it all. Joanna calls her “the loveliest person on the face of the earth.”

Joanna’s father has a list of the “top ten reasons he loves Leon.” He says the last time his daughter was this happy, it was because of a Cabbage Patch doll.

“Leon’s the best guy on earth,” says Joanna. “He really is a godsend.”