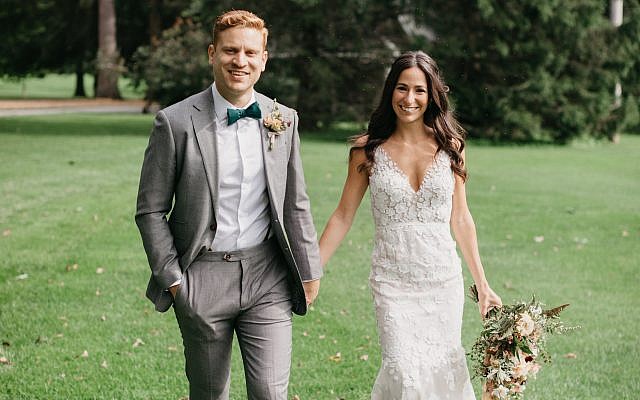 Sarah and Jonah were married on September 22, 2018 at the Tanglewood Music Center in Lenox, Mass. Courtesy of Liron Erel

Sarah Perlmeter and Jonah Freelander concur: “We’ve known each other forever.”  From the time they were children, their families met annually at a winter skiing retreat from ONEG, an Organization for Networking, Education and Growth, sponsored by the Reform rabbinic leadership. Sarah’s parents and Jonah’s parents are long-time friends and all four are rabbis.

Sarah recalls: “On one of these trips in 2011, I noticed that Jonah was really cute and I found an excuse to call him when I returned home. I was then a college senior and asked Jonah to help me prepare for a job interview.” She got the job, and the guy would come later. The brief flirtation went unnoticed and they both moved on to other relationships.

In 2014, the Perlmeters and Freelanders and two other families took a cruise together in Antarctica. The spark between Sarah and Jonah was once again ignited. Sarah was then 24, a college graduate with a BA from the University of Rochester. She would later receive an MSW from Columbia University.

After the cruise, Sarah took a six month break to travel and spend time with Jonah, who was then 29. During this time, they progressed from friendship to a serious relationship.

At the beginning, they both agreed to keep the  relationship to themselves. “We wanted the opportunity to see if it could work. If it hadn’t worked out, it could have damaged the relationship our parents had with each other. And we were cautious not to get anyone too excited before we were sure.  It was our secret for six months and then we were eager to share the happy news.” Of course, both families were thrilled.

What makes them a good match? They both respond: “We share the same interests: music, cooking, traveling and skiing. And most importantly, we both care about people. We like to be there for each other and others as much as we can.” Sarah is currently a fellowship coach and social worker at Drive Change, an organization in Brooklyn that provides job training and employment to young people who were formerly incarcerated. Jonah, a graduate of Trinity College, has spent the better half a decade directing initiatives which empower young Jews to be advocates for social change by engaging with and serving alongside marginalized communities around the world.

When talking about his marriage proposal, Jonah admits: “I took a risk. I wasn’t 100% sure how Sarah would respond. We had never really talked about marriage.” Though Sarah eventually wanted to get married, she wasn’t expecting Jonah to pop the question at the pedestal of the Statue of Liberty on September 23, 2017. However, her response was, “OK. Let’s do it.”  And she agreed when Jonah suggested they marry within the year.

364 days later, they stood under a chuppah with their parents. The groom’s mother offered the welcoming blessings.  The bride’s father officiated and led a personal rendition of the Sheva B’rachot (the Seven Blessings).  The groom’s father guided the couple through their exchange of both rings and vows and the bride’s mother recited the priestly benediction.

At their website, ONEG describes a goal of their retreats:  “To enrich each other’s lives and build relationships that endure.” It worked for the Perlmeters and the Freelanders.

Sarah and Jonah were married on September 22, 2018 at the Tanglewood Music Center in Lenox, Mass. Mazal tov.