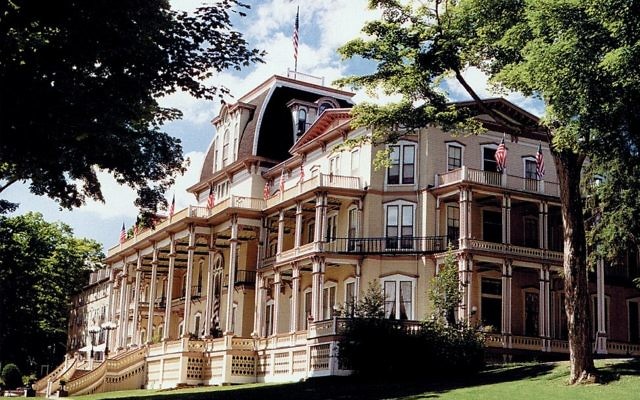 Athenaeum Hotel, on the grounds of the Chautauqua Institution, in Chautauqua, New York. Wikimedia Commons

I recently had the opportunity to speak at the Chautauqua Institution (CI) about the “Crisis of Faith” in America. For those unfamiliar, CI was founded in 1874 by Methodist Bishop John Vincent as a summer camp for Sunday school teachers on the shores of Lake Chautauqua near Jamestown, N.Y. Today, CI functions like a summer camp for the NPR crowd, the days filled with internationally known speakers and the evenings replete with symphony, opera, ballet and theater.

Each of the 10 weeks of the CI summer season is built around a theme, and “Crisis of Faith” proved especially popular. The CI community has not yet outgrown its WASP roots, although Jews are said to make up as much as 25 percent of the attendees today. A few years ago, the Everett Center was established, named after Jewish philanthropist Henry Everett, and it gave Jews their first permanent home on the grounds; it joins the CI centers that represent virtually every Christian denomination in America.

The marquee draw of the week I attended was journalist Bill Moyers. Best known for his PBS specials, Moyers is a man of prodigious intellect and a record of public service that dates back to his role in the Kennedy administration, where he was one of the architects (and then deputy director) of the Peace Corps. Unknownst to me before I had a chance to spend some time with him, he received a master of divinity degree from Southwestern Baptist Theological Seminary and has been a person of deep faith all of his life, worshipping most Sundays at the historic Riverside Church on the Upper West Side. Moyers framed each day’s presentation, interviewed the speakers after their lectures and then spoke himself on the final day of the week.

My antennae were already sensitized to the challenge that lay ahead when the speakers of the week were all asked to join a call with Moyers about a month before the program was to take place. Moyers asked us if we intended to speak about our own “crisis of faith” or about the crisis being faced by the faith communities we represented. To a person, we all assumed we were being asked to take on the latter assignment, although I sensed from Moyers some surprise, if not disappointment.

There are two main lectures each day at CI, and I had the unenviable task of following Rabbi Jonathan Sacks, former chief rabbi of the United Kingdom and author of more than 30 books. Rabbi Sacks spoke about the simultaneous growth of secularism and religious extremism in the world and the consequences of losing the moderate middle ground. Quoting Jonathan Swift, he observed: “We have just enough religion to hate one another but not enough religion to love one another.”

In my presentation to more than 1,000 people, I spoke about my work with rabbis and American synagogues. I drew a correlation between the declining membership numbers in synagogues and the parallel decline taking place in most mainline Protestant churches. I also highlighted the success of synagogues that were powerfully mission-driven, where the spiritual leaders make a clear connection between inner, personal transformation and the work of social transformation that we need to do in the world at large. I also spoke about what we are learning in the new national initiative that I am leading — Kenissa: Communities of Meaning Network (kenissa.org). I argued that even as the stewards of historic religious communities believe that the next generation is engaged in a wholesale abandonment of the institutions their elders have built, in fact, religious identity is being reinvented in exciting new ways.

I framed the “Crisis of Faith” for the Jewish community differently than the Christians who spoke on the topic. I explained that while Christians are accustomed to speaking about themselves as “faith communities,” Jews are not. Jews are less a “community of faith” than they are a “community of fate.” Jews are not united by a common understanding of God, a common lexicon of liturgy or a common observance of ritual. Those matters of “faith” are hardly shared even within one denomination or one synagogue, and certainly not across the full range of Jews in the world. But as a “community of fate” Jews do feel a powerful sense of connection to a shared history and a common destiny. If Jewish behavior were to be defined by one core phrase, kol yisrael arevim zeh bazeh, “all of Israel is responsible, one for the other,” would be a far more accurate descriptor than “Shema Yisrael…” And while some rabbis might bemoan that fact, I would argue that the sense of mutual responsibility that Jews have acted upon, generation after generation is, in fact, the secret to Jewish survival.

Many a Christian colleague has remarked to me over the years about how Jews don’t seem to attend worship services. It’s true that Jews have the lowest “belief in God” quotient of any religious sub-group in America, and we are not particularly observant of Jewish rituals at home. How is it, I’m asked, that Jews stand in greater solidarity with one another than do Christians?

In my experience, it is because for Jews, “belonging” has always been more compelling than “believing.” Even as we document the weakening ties to Jewish identity among Next-Gen Jews, the “community of fate” factor is still powerfully at work. However, increasingly, that loyalty needs to be “earned,” and that can only be accomplished to the extent our community continues to prove itself to be one of “sacred purpose.”