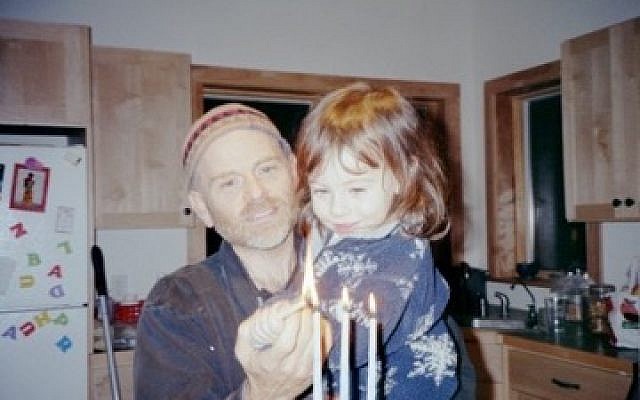 Emma Cohn, as a toddler, lighting Chanukah candles with her father. Photo courtesy of Emma Cohn

As I sat at a table of 17 other girls, I couldn’t believe how many of them knew each other. They’d never met, but as they listed off names of strangers, they found community. Mutual friends from Jewish summer camps, NFTY and BBYO conventions, RAC trips and study abroad programs in Israel tied these women together. As I listened, I could almost see the web of tangled, messy, “I can’t believe you know Eli Goldstein” strings weaving itself across the room.

It was the first day of the Rising Voices Fellowship, a leadership and writing-oriented program run by the Jewish Women’s Archive, and I was surrounded by a group of girls who, although they were brand new to each other, all had something they shared. They were Jewish. More than that, they had the connections—and stickers from camp on their water bottles—to prove it.

I glanced down at my blank Camelbak and couldn’t believe I hadn’t noticed before how empty it was.

Later, during a discussion about midrash, I slipped out to use the bathroom. As soon as I was safe in the stall, I pulled out my phone to Google Hebrew words from the conversation that I barely even recognized. I repeated the terms and their definitions over and over again to myself, trying to ignore the gnawing feeling that I’d forget them before I even got back to the circle.

On the flight home from the retreat, I turned up my Spotify and attempted to drown out the one sentence my brain refused to stop saying: “I’m not Jewish enough for this fellowship.”

Don’t get me wrong, I am Jewish. I know it genetically: My Ashkenazi ancestry reaches back through name changes at Ellis Island and shifting Polish-Russian borders, and I’ve got the nose to prove it. I know it culturally: I’ve memorized the words to the V’ahavta because I’ve spent countless hours at Sunday school and I’m quite familiar with the overwhelming hunger of being eight years old at a Pesach seder. My relatives are peppered throughout the Jewish capitals of the West: Manhattan, New Jersey, Long Island. I grew up knowing what a good bagel is.

My father was raised on the border between Conservative and Orthodox and still practices his faith in a way that is confident, rooted in tradition and reflective—an introspective and personal adaption for his life today.

In many ways, I fit the exact image of a young American Jew. So why was I stuck on that plane, agonizing over whether I had enough punches on my “Jew Card” to redeem for full membership?

Maybe it’s because I didn’t go to Camp Ramah or because my Jewish learning at a story-heavy, Hebrew-light Reform religious school left out a lot of Torah-related vocabulary words. Or maybe it’s because of something more substantial.

I’ll let you in on a little secret. I didn’t have a bat mitzvah. After fifth grade, my family moved temporarily to a small suburban town in Northern California where the Jewish population happened to be small and unenthused. So, for the three years surrounding the time when I would have had my bat mitzvah, I was living in a place where I felt disconnected from Judaism. I felt my bat mitzvah ought to challenge my relationship with my faith and mark my allegiance with a community that motivated and supported me. I didn’t want such a momentous occasion to occur in a place I felt completely untethered to, so I just didn’t have it. I still haven’t.

Does that make me less Jewish?

I went to Sunday school, but I can’t read Hebrew. I don’t know the names of obscure prayers or much of the Torah outside a handful of weekly portions. Some years, I don’t even go to shul on the High Holidays.

Does that make me less Jewish?

Throughout this past year, as a Rising Voices Fellow, there have been many times when I have felt it does. I spent a lot of this year feeling vaguely uneasy, like I had to prove myself.

I am lucky enough to be part of a cohort of powerful, informed Jewish girls brimming with equal parts knowledge and curiosity. They write blog posts with titles that mention their Jewish day school, or introspective pieces about the Kotel and what it means to be an Orthodox feminist. They hold intelligent, challenging debates about the Israeli-Palestinian conflict in our iMessage group chat. But sometimes, as I read and I listen, I can’t help feeling left out. I don’t know enough, I tell myself. I’ve never been to Israel. I haven’t had the right set of Jewish experiences.

It has taken me this entire year to realize that I’m making it all up.

The learning curve has been slow. It’s been gradual, adding up in moments when I realized another girl in the group didn’t know something also unfamiliar to me, or the admission that someone else didn’t go to summer camp. It’s looking across the circle during a particular rendition of a Havdalah song and catching the eye of someone who’s just as lost as I am—a shared shrug and giggle of confusion. It’s in finding songs, poems, stories that do matter to me; pieces of my Judaism that are pieces all my own.

I have spent the last year learning that we are all at different places in our Jewish education; we have all had different sets of experiences. And they are all valid.

There is not a single girl in this Fellowship who looks at me and thinks, “Oh, she’s the one that’s only Jewish.” When I do go to shul, my Rabbi greets me exactly the same as everyone else, whether or not she saw me at services last Rosh Hashanah. And maybe I don’t know every word, but my heart swells during the opening lines of “Hashkiveinu” anyway.

I may spend the rest of my life struggling with my place in this community. I may spend decades in conflict over my feelings about Israel or God or the Torah. But what this year has taught me is that being Jewish means wrestling with faith and community, grappling with questions without needing answers.

No, I haven’t been bat mitzvahed. No, I still don’t understand all the Hebrew phrases my friends use. But I’m practicing owning that. Instead of hiding in the bathroom with my phone, I’m pushing myself to ask what the words mean. I’m writing my own definition of Jewish and expanding it every day.

No matter where I am, what I know, or what I’ve experienced, I am Jewish enough.

Emma Cohn is a senior at the School of Inquiry and Life Sciences at Asheville in Asheville, NC.