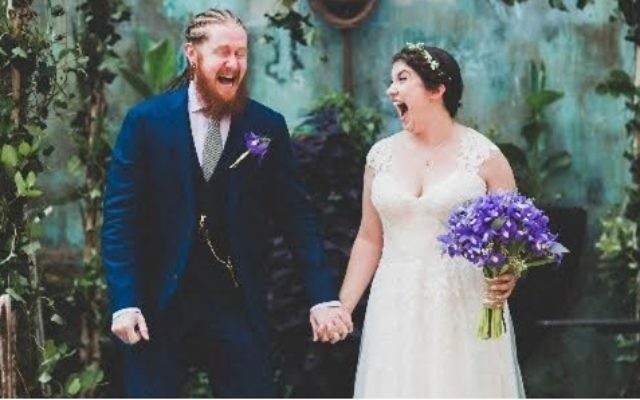 Lauren had a plan for setting up her boss, Jeremy Rosen, with her good friend, Samantha (Sam) Joachim. But she knew there was a possible risk: “I was worried they could end up hating me for tricking them into meeting.  Still, I knew them both really well and just knew they were tailor-made for each other.”

In 2009, Jeremy was 30 years old and had recently ended a six year relationship. “I’m not ready to meet anyone new,” he insisted. Nevertheless, Lauren showed him a photo of Sam.“I thought she was pretty,” says Jeremy. But he wasn’t interested in dating.  Sam, then 26, was in a similar position; just after a long-term relationship and not looking to meet anyone new.

Lauren figured it was time to take charge. “I took the liberty of getting them into the same room against their will.”  She asked Jeremy to meet her for a drink after work and she invited Sam separately. How did the couple react when they became aware of the set up? Seven years later, they asked Lauren to be the maid of honor at their wedding.

“Only for Sam would I miss my kickball game.”

“I was surprised by Jeremy’s look, a bearded redhead, but I really liked him from the beginning,” recalls Sam. “Still, I was cautious.  I had gotten burned in my previous relationship.” Sam and Jeremy began messaging each other and they talked a lot online. Then, he would help her with chores even at times that were inconvenient. Jeremy smiles: “Only for Sam would I miss my kickball game.”

The first time he asked her out, she refused; but they kept on talking. On their first date to the movies, Sam invited two friends to join them. “I wanted them to check out Jeremy.”

After four or five years of dating, Sam and Jeremy discussed the possibility of moving in together. Sam was reluctant: “I wanted to make sure that marriage was a possibility, and I wasn’t one to keep my mouth shut. One evening, while not quite sober, I blurted out: “I want to get married.  Will you marry me?” Jeremy gave her a big hug and said:  “Let’s talk later.”

Sam was sufficiently assured, so they moved in together. “Jeremy always tries to make me happy,” beams Sam. Jeremy notes: “She’s got the most wonderful smile and I like to keep her smiling.”

Two years later, in November 2015, Jeremy proposed, while they were drinking root beers, and sitting on a park bench near their home in Astoria, New York. “I want to be your husband.  Will you be my wife,” Jeremy asked. And he presented her with an engagement ring.

They set their wedding date for August 6, 2016. When they first started dating, Sam’s 90-something grandmother checked that Jeremy was Jewish. She was also curious about his family name, Rosen. The couple began researching the family genealogy, and learned, to their surprise, that they were third cousins. Sam’s great grandmother Sarah and Jeremy’s great grandfather Nathan were siblings in Romania who immigrated to the US in the early 1900’s.