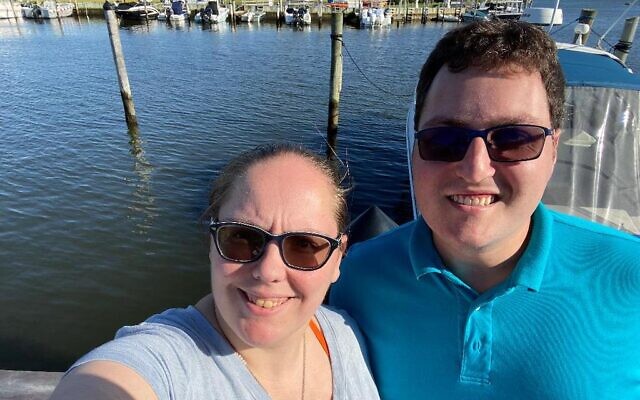 “Everyone in the world has some form of disability,” says Chelsey Tabor. “I have ADHD, an attention deficit hyperactivity disorder. My fiancé, Jake, calms me down.”

Jacob Horn: “And I have a mild form of cerebral palsy. Chelsey and I help each other.”

At the suggestion of a former friend, who thought they might be “future spouses,” Jake introduced himself to Chelsey on FaceTime in April 2017. A day later, they met at a restaurant for their first date. Jake was then 25 and Chelsey, 24.

Chelsey encouraged Jacob to join her in a program at the Jack and Shirley Silver Center for Special Needs at the Marlene Meyerson JCC Manhattan. The program, called Adaptations, offers individuals with a high level of independence a place to socialize, learn, grow and deepen their connections to one another.

The connections between Chelsey and Jake indeed grew stronger. Chelsey: “There’s one thing I’ve always loved about Jake – he’s always ready for an adventure, whether it’s camping, fishing or boating.” Still, after about a year, they decided to take some time out to focus on themselves and to pursue other relationships.

In April 2021, Jake reached out to Chelsey. “We were happier together than when we were not together,” they wrote in a joint email. “When was the happiest time of our lives? When we were together. And it’s been like that ever since. We are so in love with each other and we make each other feel like a king and a queen.”

Chelsey grew up in Manhattan and Jake in Great Neck. Both went to private schools in the city and after high school both attended the Thames Academy at Mitchell College in New London, Connecticut. Jake now lives in Rockville Centre and Chelsey in New York City. Jake works in the customer service department at Home Depot and Chelsey kvells about her job at a local ice cream store.

The couple sees each other two or three times a week while continuing to participate in Adaptations. In their words, “Adaptations is a fantastic program and we are especially grateful to the director, Allison Kleinman, and to Isabelle Vrod, the program coordinator.” Jake and Chelsey recently joined the Adaptations Couples Group, a support group which provides a safe space to discuss the ups and downs of being together while improving communication.

What’s the takeaway from their story? Chelsey: “Don’t rule out a guy because of a disability. Talk to him; meet him; and then decide.” Jake: “Anything is possible.”

Chelsey and Jake have much in common. But they also have their differences. Jake is a fan of the New York Giants, whereas Chelsey prefers the Dallas Cowboys, Denver Broncos and Seattle Seahawks. Chelsey: “But if neither team is playing that day, I’ll watch a Giants game with Jake.”

Jake proposed to Chelsey to the words of Bruno Mars:

Just say I do

I think I wanna marry you

The couple plans to wed in Garden City, New York in June 2023, accompanied by a matron of honor, maid of honor, 10 bridesmaids, seven groomsmen, a ring bearer and two flower girls.

Dr. Leah Hakimian currently researches how Jewish couples meet and marry. In the ’90s she founded two nonprofit Jewish matchmaking programs, and continues to champion the role of community in helping singles meet. She lives in Jerusalem and Great Neck, New York.