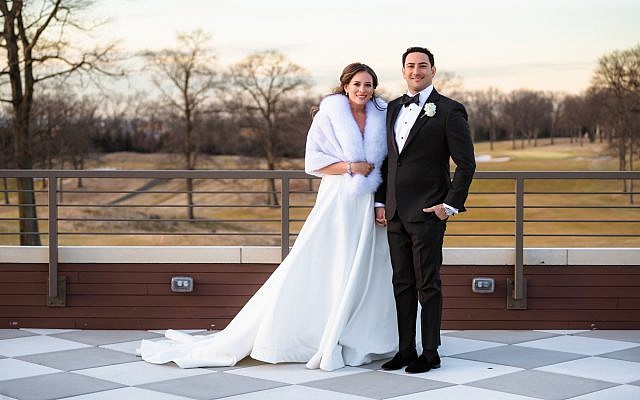 Gabe and Jennifer were married on February 17, 2019 at Montammy Golf Club in Alpine, New Jersey. Courtesy of Catalina Fragoso

Gabriel Gershowitz and Jennifer Citak were friends for about a year before they started dating. They could have written this recent article: “12 Reasons Why the Best Relationships Start as Friendships.”

Gabe recalls how they met. He was 34, and Jennifer, 27. “Our first encounter was at a charity brunch in July 2016. My friend was interested in Jennifer and I approached her with the intention of convincing her to go out with him. She wasn’t interested and I walked away.”

The couple re-connected about two months later at another party. They realized they both were fitness buffs, worked out at Equinox, and had offices near each other in Manhattan with an Equinox in-between.

Gabe is of counsel at Weil, Gotshal & Manges in New York. Prior to joining the firm, he served as a foreign law clerk to the Chief Justice of the Israeli Supreme Court. He received a J.D. from Columbia Law School, and a B.A. and M.P.P. from George Washington University.

Jennifer is Vice President of Robert Fabrikant Inc., the fourth generation to work in the family jewelry business. She earned a master’s degree in international relations from the London School of Economics and has a B.A. from George Washington University.

“Our friendship developed at the gym,” notes Jennifer.  “That’s where we bonded. We spent time exercising and talking.”  She also mentions their thirty-two mile walk around the rim of Manhattan as a memorable friend activity.

They decided to start dating in June 2017 over coffee and tea in Starbucks.  They had much in common, including a strong connection to Israel.  He’s on the young leadership board of the America-Israel Friendship League and she’s an AIPAC activist.  At the same time, they had some differences; Gabe affiliates with modern Orthodoxy and Jennifer, with Conservative Judaism. They decided they could accept the other person, rather than trying to change them, but recognized that raising children would require some compromise.

In the past, when a relationship would become too serious, Gabe had backed off. But with Jennifer, he thought: “I can’t lose this girl.  She’s too special.” He was finally ready to move forward, and so he borrowed a ring from Jennifer’s mom. “Since Jennifer is a jewelry designer, I didn’t want to design her engagement ring – I knew she would design the perfect ring for herself.”

Jennifer once had certain non-negotiable conditions for a suitable partner. “Gabe had several – he was Jewish, fit, and liked to travel.” Gabe proposed on September 30, 2018, when he, Jennifer and her dog Brody were walking along the East River. She happily accepted his proposal.

Gabe didn’t have a check-list. But he loved that Jennifer was kind and giving. “I saw how important family was to her, how she takes care of Brody, and I knew what kind of wife/mother she would be.”

Rabbi Shaul Robinson, senior Rabbi at Lincoln Square Synagogue, officiated at their wedding. He commented:” I don’t think I have met a couple who worked as hard at creating their dream chuppah ceremony as did Gabe and Jennifer. It was important to them that every part of the ceremony be both 100% in conformity with halacha and also an opportunity to celebrate and honor family, rabbis, cantors, friends and teachers who had helped shape them. The beauty of their ceremony is a reminder that it’s possible to blend many different types of Jews into a very meaningful and personal moment.”

The couple smiles, reflecting: “The wedding was a microcosm of us.”