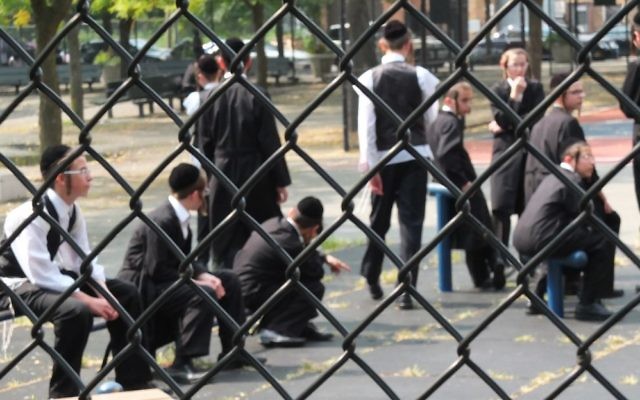 Editor’s Note: This is second in a three-part series. The first article is here, and the third is here.

From the outside, Computer Corner does not look like a technology business handling million-dollar technology contracts.

On a recent Tuesday afternoon, a graffiti-marred metal gate covers the window, and the doorway, in need of a paint job, has no sign.

The only indication that a computer store lies inside this four-story red-brick building with rusty fire escapes on a modest residential block of Brooklyn’s South Williamsburg is a discarded Dell computer carton lying next to the garbage cans.

Universal Service Administration Company (USAC), the nonprofit that runs E-rate and other programs for the Federal Communications Commission, appears to have denied that particular request. However, it did pay Computer Corner more than $500,000 in 2011 for services provided to the Satmar girls’ school, a school that 12 years earlier was implicated for colluding with the local community school district. The 1999 scheme involved placing dozens of chasidic women on the public schools’ payroll in no-show teaching jobs in order to funnel more than $6 million to the school and its parent organization, United Talmudical Academy.

How did Computer Corner — along with numerous other little-known companies, most of them located in fervently Orthodox neighborhoods of Brooklyn and Rockland County — get to be among the largest service providers in the E-rate program, earning millions of dollars providing Internet and other tech services to yeshivas whose leaders publicly rail against what they call the “evils” of the Internet?

Some of these companies, many of which, like Computer Corner, don’t have a website, have even appeared on E-rate’s top 10 list of funding approvals and funding denials nationwide.

E-rate, which disbursed $2.2 billion nationally in 2011, was created under President Bill Clinton, part of the
sweeping Telecommunications Act of 1996. That legislation established the Universal Service Fund, a pool of money collected through a fee on long-distance phone service and then used to “help communities across the country secure access to affordable telecommunications services,” according to the USAC website.

In a four-month investigation, The Jewish Week reviewed E-rate data along with numerous filings submitted by Jewish schools and their service providers. The paper conducted an extensive analysis of 2011 E-rate awards, reviewed the funding history of the Jewish schools and service providers receiving the largest sums of money, examined “470” forms detailing schools’ technology requests, and looked at various audit reports and FCC rulings. With the exception of the 470s, all of this information is publicly available on the website of E-rate Central, a Long Island-based E-rate consulting firm.

The Jewish Week also made repeated attempts to interview administrators at several of the yeshivas receiving the largest sums of money, as well as officials at companies that have billed E-rate for services reportedly provided to these schools. With the exception of an E-rate consultant, whom one school suggested The Jewish Week contact, none of these people returned calls or agreed to be interviewed.

It is not hard to become an E-rate service provider.

More than 4,000 companies nationwide collect payments through E-rate; becoming an official provider simply requires calling USAC to obtain a Service Provider Identification Number (SPIN) and providing basic information, like the company’s name and street address. Beyond that, USAC and the FCC do not vet service providers, requiring them only to submit an annual certification form containing basic company contact information and certifying that they will abide by the rules of the program. (Companies that provide telecommunications services responsible for contributing to the Universal Services Fund, which funds E-rate, must register with the FCC, however).

Many of the providers that haredi schools rely on for the bulk of their E-rate-subsidized purchases seem, like Computer Corner, to be small businesses that appear to serve an exclusively Jewish clientele.

Williamsburg-based Discount Cellular Plus (DCP), which became an E-rate service provider only in 2010, has been allotted about $1.5 million through E-rate in New York between 2010 and 2012. It appears to provide E-rate services exclusively to fervently Orthodox schools, and has so far requested more than $500,000 in E-rate reimbursements for fiscal year 2013.

DCP is currently being sued in federal court by Sprint/Nextel. The suit alleges that DCP, along with its owner Yoel Stossel and two other men, Chaim Weiss and Yanky Katz, targeted yeshivas to steal their special discounts and rate plans and that the defendants then fraudulently acquired large quantities of “new high-end Sprint phones,” including iPhones, which they illegally unlocked and resold for a substantial profit. When a Jewish Week reporter called DCP to talk about E-rate and the Sprint case, she was referred to the company’s attorney. A message left with the attorney was not returned by press time.

Mekach Tov Enterprises, Inc. has done about $850,000 worth of E-rate business in the three years it has participated in the program. The company, which has an address in Brooklyn and is sometimes listed as Tov Mekach, is categorized in Manta, an online database, as a “Burglar and Security Systems store.” However, a company by the same name at the same Borough Park address (which appears to be a storefront mailbox rental establishment) appears previously to have been an importer of religious books and articles. A call to the phone number listed for the company was answered by a fax machine.

Not all of the providers serving haredi schools are exclusively local or small, however and several, it seems, are run by the same or related people.

Dynalink and Birns are both located in the same building on West 17th Street in Manhattan and both list Mendel Birnbaum as the contact person on E-rate forms. Birns, a large telecom company that was established in 1973 and has participated in E-rate since 1998, has received over $9 million serving Orthodox schools in New York through the program. It landed at No. 7 on a list of E-rate’s top 10 funding commitments nationally in 2011.

Dynalink, which appears in New York State to serve almost exclusively haredi or chasidic E-rate clients (it also does E-rate business in other states, including New Jersey, Florida, Texas and Tennessee) got into the E-rate business in 2006. But it has already been awarded over $6 million in New York alone, the majority of that for telecom services followed by internet access.

In 2009, XO Holdings — a Delaware-based company with revenues of $1.4 billion in 2007 and whose subsidiary, XO Communications, has participated in the E-rate program with all types of schools nationwide (it has been awarded close to $90 million since 2005) — filed a federal lawsuit against Lawrence Fishelson, a former XO employee, and Solomon Birnbaum (who co-founded Birns), Mendel Birnbaum, Dynalink and Voice Data Technology Consultants. Upon Fishelson’s termination from XO in 2005, he formed Dynalink with the Birnbaums. The complaint alleges that together they conspired to intentionally interfere with XO’s business relationships with yet another company, Choice Tel Communications, which Birnbaum acquired from his father-in-law, Moshe Birnbaum and daughter, Chaya Freund.

Other big E-rate providers in the Jewish community include: Communications Data & Security, Inc., in Rockland County ($10.2 million); Hashomer Alarm Systems in Rockland County ($8.9 million); Smart Telecom in Far Rockaway ($8.2 million); ID-Tech, which has offices in Borough Park and in Lakewood, N.J. ($7.5 million); and LightHouse Equity, Inc., a Borough Park company that, according to state records became inactive 2010 but still seems to be operating ($4 million).

Given the amount of E-rate business it has done over the years, one would expect there would be more public information available about LightHouse (which found its way onto a top 10 list of both funding commitments and denials in 2011). The contact address for the company, in care of an entity called My Advisor LLC., appears to be a residential building in Borough Park, the back of which practically abuts Bnai Zion, a Bobover yeshiva on 15th Avenue (to which the company has provided service, among other Bobover yeshivas and other haredi schools). The contact for LightHouse’s E-rate program is Thomas Monahan, however a call to the number listed for him on E-rate forms was answered by a woman who indicated that she was not at the company’s physical location but worked for an answering service. A message left for Monahan was not returned by press time.

In 2011, Hashomer and Birns Telecommunications each collected more E-rate money for services provided to Jewish schools than did Verizon, Sprint or Nextel. In fact, Hashomer, which received close to $3.5 million in E-rate work for Jewish schools in 2011, did more E-rate business in the Jewish sector that year than Verizon, Sprint and Nextel combined.

The Jewish Week called Hashomer, which has addresses in both Spring Valley and Monsey, but was told by the man who answered the phone — who did not give his name but said he was with the “Security Division”— that nobody was in the office as they were all out in the schools, making estimates for upcoming E-rate application deadlines; he told The Jewish Week to call back “in a few weeks.”

Reached by phone at Dynalink, Hirsch Birnbaum (this name also appears on Birns’ documents as vice president of sales for that company) told The Jewish Week that he didn’t have time to talk about E-rate unless the reporter wanted to buy a contract or was willing to pay him $200 an hour. A call to Birns was answered by someone who told The Jewish Week he was in “service” and didn’t even know “what an E-rate is” and had “no idea” what the reporter seeking information was talking about.

When The Jewish Week called Communications Data & Security, the reporter was put on hold by the woman who answered and then put through to a number that rang more than 20 times, with no answer and no voicemail.

In 2007, Bais Ruchel D’Satmar — the school that was the top Jewish E-rate recipient in 2011 and has been awarded about $3 million since E-rate’s inception — is also identified in public data as a service provider, with two service-provider identification numbers associated with its name. One is the same number Hashomer has today, while the other now belongs to All Care Communications Inc. Asked why this may have been the case, an E-rate consultant who requested anonymity so as not to jeopardize client relationships, told The Jewish Week that it could have been some kind of typo. However, the consultant added that schools registered as service providers should raise red flags because of the possibility of self-dealing.

Between 2007-2010, All Care was approved for close to $1 million in E-rate funds. Since 2009, it has been registered with the FCC as headquartered at 320 Roebling St., a low-rise apartment building with a mailbox rental establishment on the first floor. Several calls to the listed contact person, Joel Polatsek, were answered by the sound of a beep. A call to a Brooklyn-based company called All Care Management yielded a message that the number had been disconnected.

Asked if he finds it odd that the yeshivas rely largely on small businesses that serve only other Orthodox institutions, Richard Bernstein, a Woodmere, L.I., E-rate consultant whose clients include Jewish and non-Jewish schools, said no.

“That’s the way [they] do business in general, with people they know,” he said. “Other groups are the same, they want to work with someone who knows and understands them. … It comes down to service. You want to know if there’s a problem you can make a call and someone will come fix it. You don’t want to call Dell and get someone in India. Schools can’t afford to [have their computer system go] down or to not have their phones work.”