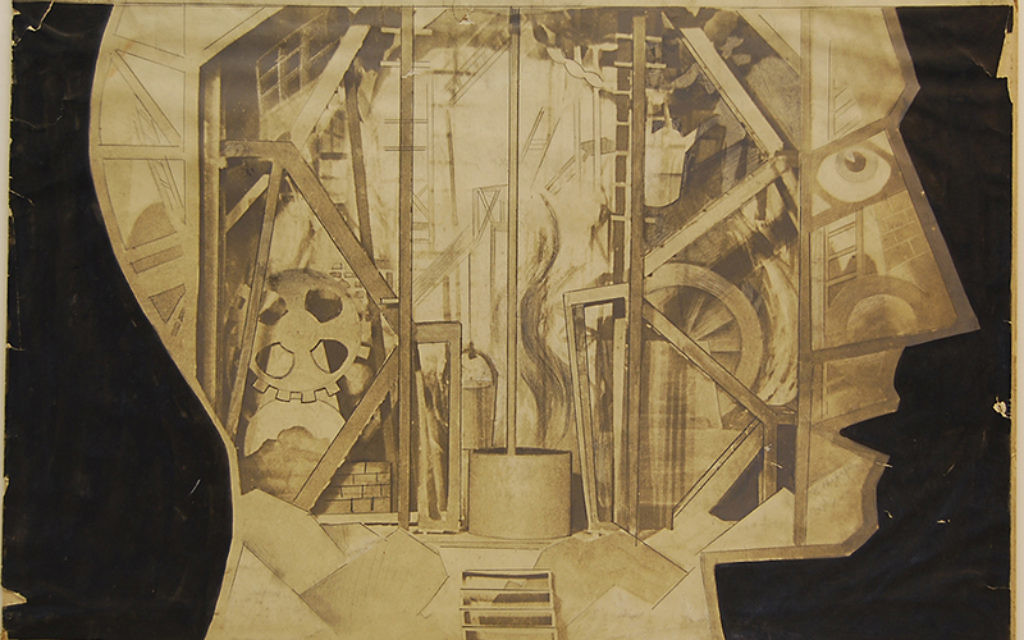 After a preliminary meeting with director-choreographer Jerome Robbins to discuss his concept for the original 1964 production of “Fiddler on the Roof,” the set designer Boris Aronson felt that he had a good idea of how the production should look. The color, he knew, should be based on the palette of Marc Chagall’s paintings. And the set, as a whole, should also reflect Chagall’s sentimental outlook, he wrote in his notes: “simple-naïve-buoyant-primitive-childlike-charming-delightful to look at.”

Aronson, one of the greatest and most prolific theater artists of the 20th century, had begun what would ultimately be an iconic depiction of an Eastern European shtetl. In a new exhibit at the Vallois America Gallery on the Upper East Side, “Preparing the Miracle: From the Bronx to Broadway, Boris Aronson and the Yiddish Theatre,” Aronson’s early work for the Yiddish stage is revealed to be the precursor for his Broadway oeuvre.

Aronson was born in 1900 in Kiev; his father was the chief rabbi of the city. The son, who called himself “The Outlaw,” displayed an early talent for painting and a passion for stage decoration. The young artist broke into the theater by working with designer Alexandra Exter in her 1921 “cubo-futurist” production of “Romeo and Juliet” at Alexander Tairov’s avant-garde Kamerny Theatre in Moscow.

Exter, a friend of Pablo Picasso and Georges Braque, applied Cubist methods of painting to her work; her sets were composed of angular three-dimensional planes that reflected light at odd angles, and her costumes were sewn from mismatched scraps of jutting cloth. She was also a leading proponent of Constructivism, the Leninist artistic movement that celebrated the worker and the factory; she developed sets with platforms, ladders and moving parts that gave actors much greater freedom of movement and that exposed the inner workings of the stage machinery.

It was this avant-garde approach to stage design that Aronson imported with him when he landed in New York in 1923 (after a year in Berlin, where he published books on Chagall and on Jewish graphic arts, and organized a major modern art exhibit). He was soon swept up in the world of the Yiddish theater, at a time when there were no fewer than 17 Yiddish companies in the city. Aronson found work with the Unser Theatre (Our Theater) in the Bronx and with Maurice Schwartz’s legendary Yiddish Arts Theater. His timing was propitious. For even as the second generation of New York Jews were coming to the fore, gravitating away from the Yiddish stage and toward Broadway plays and musicals, the immigrant Jewish theater was reaching its artistic height by embracing European movements such as French Surrealism and German Expressionism.

Aronson was a key figure in this reinvigoration of Yiddish theater. His Expressionistic set for S. Anski’s last play, “Tog un Nacht” (Day and Night), was made up of irregular black-and-white geometric shapes and shadowy staircases upon which the Devil ran riot. Aronson’s imagination seemingly knew no bounds, as one sees in his fanciful 1926 sketch, “Design for the Circus,” in which one performer has a circular fan for his head while an acrobat, suspended high up in the air with one foot on the corner of a chair, waves a huge American flag from his hat.

Few of the images in the exhibit are new; most will be familiar to readers of Frank Rich and Lisa Aronson’s comprehensive coffee table book, “The Theatre Art of Boris Aronson” (Knopf, 1987), which was inspired by the New York Public Library exhibit on the designer that ran just a few months after his death in 1980. (A major upcoming exhibit on the history of the Yiddish theater, which opens at the City Museum of New York in March, will also include some of his designs.) But one of the strengths of the current exhibit is that it frequently uses both artist’s sketches and photographs to give a sense of how the designs actually came to life. For example, one sees, both in a sketch and in a photograph of the work, the marvelous frieze-like mural, with images of costumed actors, that Aronson crafted to adorn the interior of the auditorium for the Unser Theatre (Our Theater) in the Bronx. (The mural was lost when the theater was torn down in 1966).

Likewise, the exhibit includes a sketch for the extravagant drag costume Maurice Schwartz wore in Abraham Goldfaden’s “The Tenth Commandment,” the first production of Schwartz’s new Yiddish Art Theatre, for which Aronson gave full throttle to his Constructivist ideas. Especially helpful is a photograph from the production in which Schwartz appears in a scene with his co-star, the legendary Joseph Buloff.

But some images, lacking photographs, stand gloriously on their own. “Two Hasides” is a painting of a pair of chasidic Jews clad in a crazy, collage-like patchwork of scraps; the sleeves and stockings are made from torn-out pages from prayer books. And a painting of one of Aronson’s sets for Osip Dymov’s 1925 “Bronx Express,” a Surrealistic play (later translated into English and produced on Broadway) about a Lower East Side button maker who falls asleep on the subway and is seduced by the subway advertisements, shows the subway straps still hanging above the Coney Island restaurant where the characters converge. Also highly evocative are the sketches for “Oriental Dance,” a mid-1920s New York recital by the classical Russian dancer, Baruch Agadati, who moved to Palestine and became a pioneer Israeli choreographer and filmmaker.

The exhibit concludes, fittingly, with Aronson’s design for “Fiddler,” with its inverted wooden shtetl buildings marching along the top of the proscenium arch, framing the red-capped musician as he is perched precariously on Tevye’s shack. But one feels keenly the omission of the intervening decades between the 1920s and 1960s, when Aronson designed the sets for dozens of Broadway plays and musicals, including major works by Clifford Odets, Arthur Miller, and Stephen Sondheim, and won six Tony Awards in the process. (His 1970 design for Sondheim’s “Company” was especially Exter-like, in its use of cage-like structures, platforms set at different heights, and two working elevators.)

Arnold Aronson (no relation to Boris), who teaches theater history at Columbia University, told The Jewish Week that although the artist got “trapped in American realism and pure Broadway naturalism,” he still managed to bring a “sculptural element” to his work, nurtured by his work in the Yiddish theater, that set him apart; the work of other top designers like Jo Mielziner (who designed “Death of a Salesman” and “A Streetcar Named Desire”), was more painterly and imagistic.

Nevertheless, the scholar noted, audiences often overlook the contribution that the designer makes to the experience of theatergoing. “Even sophisticated audience members don’t tend to know what they’re looking at — how the use of space, color, and texture determine their response to the play.”

Then again, like all the other elements that go into a theatrical production, the set is transient; when the run of the play is over, it gets dismantled. Perhaps this is why Aronson, toward the end of his life, designed a pair of Torah arks for synagogues (one at the Community Synagogue in Sands Point, L.I., and the other at Temple Sinai in Washington, D.C.) Although he himself had not set foot in a synagogue for many years, Aronson resolved “to do something they couldn’t tear down afterward” — something that would never go away.