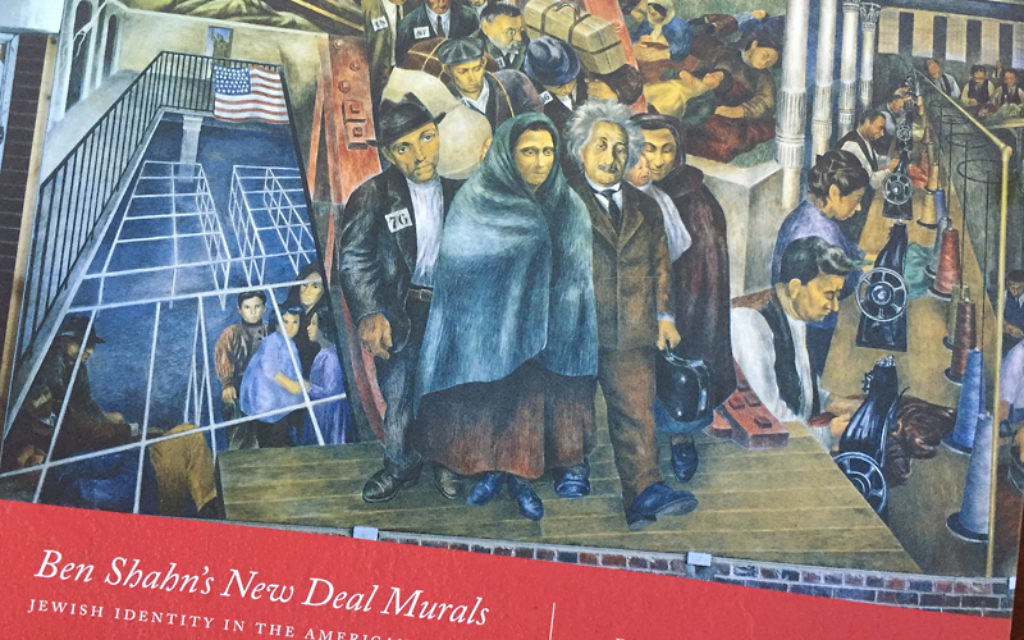 Picture a secular Jewish socialist on fire for justice for the poor, the working class, and the immigrant.

Refocus on Ben Shahn, the 20th-century American painter, muralist, photographer and graphic artist and a leader of the social realism art movement.

Shahn’s life work was infused with the political passions of his time. He expressed them by retelling the Hebrew Bible’s stories of slavery, exile and freedom in images of garment workers, cotton pickers, labor organizers, immigrants and refugees.

A Lithuanian immigrant who came to New York in 1906 at age 8, Shahn was shaped by his early religious education and informed by his experiences and observations of “the social and political events and history of Jews in America,” she writes.

He died in 1969 at age 70. But his works — in museums and public buildings from New York to California, and in digitized collections online — speak to a universal audience, particularly in this riven 2016 election season.

Look to Shahn’s series of 23 paintings detailing the controversial trial and ultimate execution of Nicola Sacco and Bartolomeo Vanzetti. They were two radical Italian immigrants of the 1920s, convicted of murder on scanty (and now missing) evidence.

Their death penalty was upheld by the power elite, represented in the best-known painting of the series, “The Passion of Sacco and Vanzetti,” as white Christian exemplars looming over the open coffins of the two dead men, Linden writes.

Former Harvard law professor Alan Dershowitz explains this painting in theWhitney Museum’s audio guide, concluding, “The real villains of the case were the judges and the university presidents who lent the legitimacy of their institutions to a case of racism and injustice.”

If Shahn lived today, he’d be painting the aftermath of 9/11 and the fear and discrimination faced by Muslim immigrants, said Linden in an interview.

While never a Communist or an avowed atheist, Shahn was close to many who were, including his second wife, the artist Bernarda Bryson. Yet he also was fiercely devoted to the First Amendment, with its vaunted four freedoms.

“(It) held special significance for Shahn, as it did for many American Jews who aspired in the United States to achieve civil liberties denied them by European nations,” Linden writes.

He observed the rise of Hitler from a distance with horror, deploying his art to battle the “fervent resistance to open immigration” that kept desperate Jews from a safe haven in the United States, she writes. The doors to freedom were shuttered by Americans’ fear of “unemployment, nativism and anti-Semitism” — fear stoked in the 2016 presidential campaign.

Despite his differences with the Roosevelt administration on immigration, Shahn was an ardent New Deal fan, winning mural commissions and working as a photographer for the Farm Security Administration. Images from those photos live on in many of his posters.

And their messages — calling for just wages and civil rights — are as contemporary as today’s headlines.

Stroll into the lobby/lunch room of a 1930s New Jersey elementary school, sit at a little table with a stray Fruit Loop on it and look up at Shahn’s “Jersey Homesteads,” one of his most famous New Deal murals.

Shahn and Bryson’s son, the sculptor Jonathan Shahn, went to this school as a child. He still lives adjacent to his late parents’ home (sold and empty now), a few blocks from the Roosevelt Public School.

The town, originally named Homestead, was created as a New Deal utopia for garment workers escaping suffocating tenements on the Lower East Side.

When Jonathan Shahn, now 77, gazes up at the mural, he sees his neighbors portrayed with their solid bodies and heavy hands. These are not the lean and muscular, romanticized workers of a Thomas Hart Benton painting of Americana, he said. “My father cared very much about how people actually looked.”

He pointed to the mural: There’s his grandmother. There’s Albert Einstein, then living in nearby Princeton and a supporter of the town’s creation. There’s Raphael Soyer, another immigrant artist friend of his father’s.

Yet, as in any great art, its story is personal to everyone who encounters it.

The mural is a three-part story of Jewish refugees, fleeing European anti-Semitism, laboring in American industry and agriculture, and ultimately building a new life in a New Jerusalem. It’s a kind of Passover Haggadah, a retelling of Exodus done by a man who observed no Jewish rituals in his adult life.

On the left, a German soldier holds an anti-Semitic sign. People move through Ellis Island. They walk right into a viewer’s world — mothers, scientists, artists, workmen and more — bringing their intrinsic gifts and talents.

In the center, Shahn shows their daily lives of strenuous work and meager moments of respite. There’s the rise of union activism, a soapbox speaker and behind him, a glimpse of the Triangle Shirtwaist building where an infamous 1911 fire killed 146 young workers locked in a sweatshop.

To the right, he shows the birth of Homestead, designed to be a cooperative for needle trade workers who would farm in the summers and make clothes in the winter.

In this and other murals, “his compositions were daring and innovative in their use of montage, dynamic sense of movement, and portrayal of multiple time periods and locations,” Linden said.

Shahn’s mural tells another story as well — one that glorifies the human spirit.

No one’s eyes are turned toward heaven in supplication or in gratitude. Their eyes are cast down on their labors, or aside to their comrades.

Sometimes they look straight out to a viewer: We accompany them.

This is a secular revisiting of the Passover narrative — a version in which no God intervenes to change the course of history, to soothe, sustain or save people. Humans are called to heal the world without an omnipotent Almighty’s shoulder at the wheel.

His 1942 mural, “The Meaning of Social Security,” at the Wilbur J. Cohen Federal Building in Washington, D.C., resonates with religious values expressed in secular terms.

“In the face of mounting challenges, (Shahn) envisions the untapped promise of a responsive democracy,” said Peter Winant, director of the School of Art at George Mason University in a video spotlighting the work.

How Jewish is that? How contemporary? How might it echo a Sanders campaign speech?

Shahn was born into a scholarly Lithuanian Jewish community that by the early 1900s was afflicted by a wave of pogroms (government-encouraged massacres of Jews). Shahn’s socialist father was sent for a stint in Siberia. After several detours, the family ultimately reunited in New York.

By age 14, Shahn had left school and apprenticed with a lithographer. Art became livelihood — and his new language.

All his son recalls now of Shahn’s relationship to Judaism is a tale his father told about why he shed his religious faith.

It happened when he was young and read the biblical passage (2 Samuel 6:2-7) about an Israelite who, fearing the Ark of the Covenant would tumble to the ground, breaks the Lord’s command not to touch it. God smites him for disobedience.

“He lost all interest in God then,” said Jonathan Shahn. “It seemed unjust to him.”

In his 20s, Ben Shahn studied painting in Italy where he learned the vivid language of murals — the visual textbooks of the Italian Renaissance church, meant to be “public, permanent, monumental,” said Linden.

Decade by decade, as Shahn moved through artistic genres and political and social upheavals, he sought to make art that could inspire action, that would galvanize people. Pretty was never the point.

Shahn once told a BBC broadcast, “The condition of the human being is the story that I’ll tell.”

Ben Shahn’s deserted studio sits in the greenery a few feet behind the empty house where he lived for nearly half a century before his death in 1968. Religion News Service photo by Cathy Lynn Grossman

The power of text

Shahn was prolific in creating lithographs and posters that married text and graphics to serve powerful ideas. His 1965 series of civil rights movement posters, many featuring biblical text, are part of the collection at the Center for the Study of Political Graphics in Culver City, Calif.

One of the center’s Shahn posters shows a white hand reaching down clasping a brown one that reaches up. The headline, given in both Hebrew and English, is drawn from a line in Leviticus 19:16: “Thou Shalt Not Stand Idly by…”

Center founder Carol Wells says in a video, that a poster — an art form boasting strong colors, bold images and text — “makes you stop. It makes you think and it makes you ask a question.”

Judaism honors questions and doubt. And Jews have claimed Shahn among their greatest visual storytellers. His work has been displayed in the collection and special exhibitions by The Jewish Museum in New York City.

In his later years, Shahn circled back to images that dominated his earliest years — those of Hebrew letters. He reimagined their shapes and made them dance in lithographs and books such as “The Alphabet of Creation,” published in 1954, and his 1963 book “Love and Joy about Letters.”

Shahn always understood the expressive power of text, said Frances Pohl, art history professor at Pomona College in California. She has written two books on him including “Ben Shahn,” a 1993 collection of his images and text.

“The word is instrumental to the formation of the world and how we understand our place in it. Word and text, not image, are the underlying power in Judaism, as in Protestantism,” she said.

What unifies his work is the drive to prompt debate and social change. Pohl said, “It’s not a stretch at all to compare Shahn to Bernie Sanders. He would have a field day with (Donald) Trump!”

And his approach to creating art would likely resonate with Bernie Sanders’ millennial supporters.

‘With eyes open to all’

Shahn talked about his roots and his artistic and social aims in a series of lecturesdelivered at Harvard in 1956-57.

He was a sophisticated and meticulous artist but it was all in the service of one goal, Pohl said. “He wanted people to think deeply about religion and philosophy and political activism.”

His advice to young artists was an exhortation to read from Plato to Pogo (then a politicized comic strip), to study widely from science to history, to travel far and to look closely.

“Go about with eyes open to all images around you and listen everywhere — to music, conversation, politicians and preachers in small town churches and in big city churches,” he said.

To his thinking, “A work of art in which powerful compassion is innate, or which contains extraordinary revelations concerning form, or manifests brilliant thinking, however difficult its language, will serve ultimately to dignify that society in which it exists.”

And, he exhorted, “Never be afraid to become embroiled in (the) art of life or politics.”