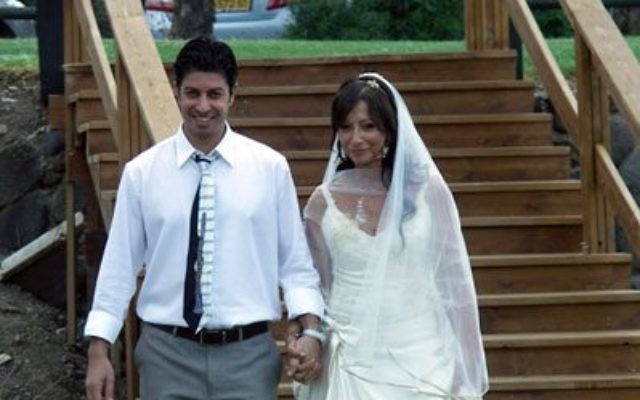 There was an age difference of 20 years. When Anat Keinan met Assaf Torati, she was 48, and he was 28. That was in Ra’anana, Israel in 2001. He went for a haircut and met Anat, who was the manager of the salon. “The first time he came in, we started talking,” recalls Anat. “He kept coming and we kept talking. I thought he was coming to flirt with my daughter, who was co-manager.” But Assaf thought differently.

Anat and Assaf, who works in high tech, became best friends. Anat found herself spending Fridays with Assaf’s family. “They were very accepting” says Assaf, whose family roots are in Shiraz, Iran. Anat adds: “They also knew that Assaf would do what he wants. The eldest son has certain privileges.”

Anat’s daughter, Naama, was happy for her mother. “My mom is young at heart – that’s how she looks, she dresses, she thinks, and behaves. She’s most comfortable in the company of young people.”

For two years, Anat and Assaf enjoyed a close friendship, spending hours in conversation and listening to music. Their relationship changed when Anat announced that she wanted to travel to Italy. “That was my opportunity,” says Assaf. The two returned a couple.

A study by the American Association of Retired Persons noted a decade ago that 34 percent of women over 39 years old were dating younger men. The number of women marrying younger men has soared in recent years.

As for the pop term “cougar” (for women dating younger men), Anat says: “After the divorce from my first husband, I always dated younger guys. In earlier times, women had no power and no money and they chose to marry men who could look after them. Today, we marry for love.”

If a stranger questions his relationship, how does Assaf respond? “I just reach out to Anat for a romantic kiss in public.”

They agree: “Whoever has an open mind, accepts us.”

At home, Assaf is the cook and Anat does the cleaning. “We’re a team,” says Anat. “We’re so much alike and that’s what makes our relationship so strong.”

Anat has two grandchildren. “I relate to those kids like they were my own kids,” says Assaf. “I feel complete as a grandfather.”

When Assaf proposed in 2007, Anat had a grandchild sitting in her lap. They were at the little boy’s home, Assaf recalls: “I got down on my knee, and pulled out the ring. And when I asked Anat to marry me, it was Noam, one of our grandchild, who jumped up and answered yes.”

When they started to plan their wedding, Anat turned to her daughter to design her gown as Naama was now her partner in a bridal salon, Naama and Anat. “I was a most difficult client,” says Anat, “but it all ended well.”

Anat says her story has inspired another woman who was the older partner in an age-gap relationship to follow her lead and marry. Anat’s advice: “Go with your heart and not with your head.”