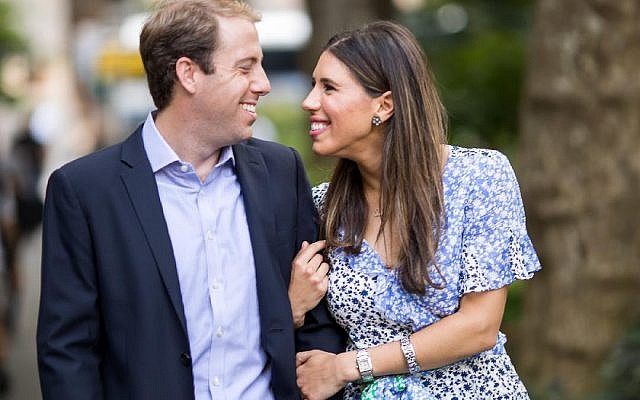 Melanie and Adam were married at the Brae Burn Country Club in Purchase, New York on October 20, 2018. Courtesy of Roey Yohai

Melanie Baevsky and Adam Besvinick recount the story of how they met. It was October 2014. Adam was 27 and Melanie, 25.

“Melanie and her Account Coordinator, John Brennan, were tweeting back and forth when @Besvinick joined the conversation. Melanie immediately asked John: Who is this? How do you know him? Is he single? Jewish? Tall?

John replied in the same order: Adam is the best! He mentored me when I was in college. Definitely single and Jewish. But let me find out if he’s tall enough for you.

@brennanjp: How tall are you?

@brennanjp: I’m setting you up on a blind date with @mel

@Besvinick: I’ve never been set up before

@brennanjp: You guys would get along SO well

@Besvinick: Give me her number I guess

One week later, Melanie and Adam went on their first date. They talked for hours about their jobs, families, travels, favorite restaurants, love of tennis and aversion to cheese. They talked for so long, they shut down the bar! Adam kissed Melanie goodnight, texted her on his cab ride home, and knew that she was the one for him.”

Adam, or as his friends affectionately call him, “Bez,” comments: “In truth, because of the Internet there is no such thing as a blind date anymore. We check out each other’s looks, friends, interests and bios.”

Melanie grew up in Harrison, New York and graduated from Cornell University, where she studied Communications. She is currently a director of NBCUniversal’s digital partnership team in New York.

“The time you have spent together is the best investment you’ve ever made.  Nothing ventured, nothing gained.

Adam, who made the Forbes “30 under 30” list in venture capital in 2016, explains the value of pure hustle in his profession. On a personal level, he feels the same way: “When you have a conviction, pursue it. Don’t be coy, don’t play games, don’t play hard to get. Don’t be rash, but be decisive.” On his first date with Melanie, he saw in her all the qualities he was looking for in a wife. They moved in together in June 2016.

What makes them a good match? Melanie smiles: “Both personally and professionally, we share the same values, care about the same things and have similar goals. We come from fairly similar backgrounds–both from suburbs of big cities.”

Melanie recommends bringing one’s family into the picture early in the relationship. When Adam called her before their third date, Melanie was visiting her parents in Westchester.  Her mom encouraged her to accept.  Within a month he had already met her family.

In July 2017, Adam proposed to Melanie–at home, in a simple, private and very straightforward manner.  That’s his style.

As a college student, Melanie worked in editorial at Brides.com. which inspired her own wedding plans. “I wanted lots of color and lots of fresh flowers.”

On October 20, 2018, the couple stood under the chuppah, wrapped in the tallit of Melanie’s father.  In referring to their “how they met” story, Rabbi Hammerman asked: “Was all of this destiny? Was it bashert? Maybe just some mazal tov–some really good luck.”