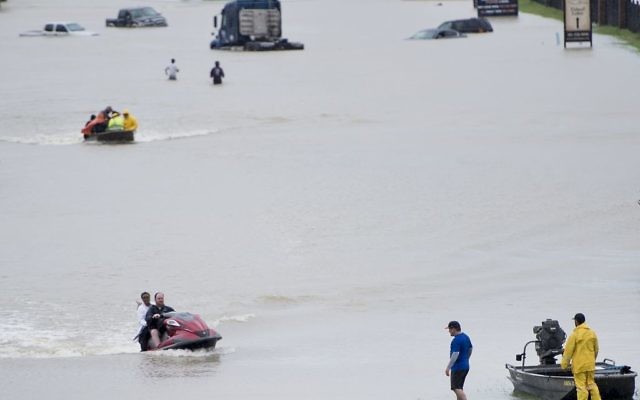 Volunteer rescuers evacuate people from a flooded residential area during the aftermath of Hurricane Harvey on August 29, 2017 in Houston, Texas. Getty Images

Most Houston-area Jewish institutions have been flooded due to Tropical Storm Harvey and a large portion of the city’s Jewish population is living in areas that have experienced flooding, the Jewish Federation of Greater Houston said.

“While we do not yet know the full extent of the damage, we know that most of our Jewish institutions have flooded,” the federation said Monday evening in a Facebook post. “We know that 71 percent of our Jewish population lives in areas that have seen massive flooding and Jews have been displaced from their homes with flooding ranging from six inches to ten feet. We know that close to 12,000 elderly members in our community live in areas impacted by flooding.”

As some two inches of rain fell per hour in the Houston area on Tuesday morning, according to reports, Jewish institutions were pitching in to provide shelter and relief for those affected by the storm.

The Union for Reform Judaism’s Green Family Camp in Bruceville, Texas, announced Monday in a Facebook post that it would be opening up to accept former campers, congregants and friends affected by the storm. The post said the camp could provide housing, food, air conditioning, internet and electricity “for a limited time.” 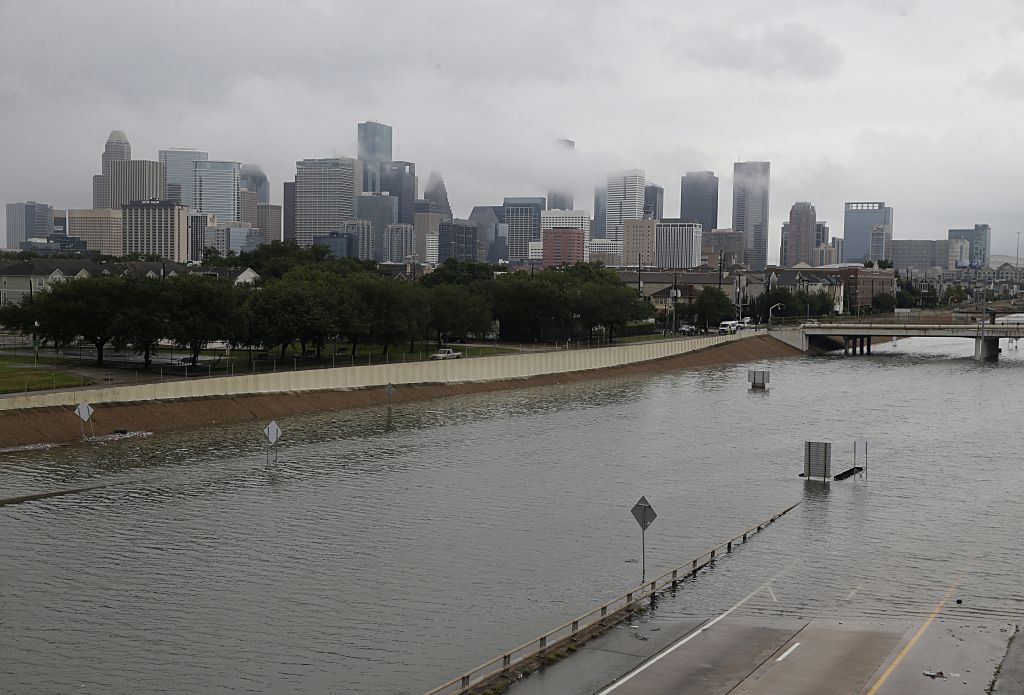 The downtown Houston skyline and flooded highway 288 are seen August 27, 2017 as the city battles with tropical storm Harvey and resulting floods. Getty Images

Meanwhile, Chabad-Lubavitch of Texas is coordinating truckloads of kosher food to be sent to the area and will set up a kosher food pantry available to the Jewish community as supplies reach the area. Chabad emissaries in Houston have been preparing and delivering kosher meals to people evacuated to emergency shelters or who took shelter in hotels, according to Chabad.org.

IsraAID, an Israeli-based humanitarian aid agency that responds to emergency crises and engages in international development around the world, said in a tweet Monday that it was coordinating with governmental and nongovernmental first responders and that its emergency teams continue to prepare for deployment. It sent seven members to Houston on Tuesday, who were set to join three others who already were in the United States when the hurricane hit.

Homes have been without power for two days, and floodwaters have reached the roofs of some single-family homes, according to reports. At least three deaths have been confirmed, and the Houston television station KHOU reported Monday that six family members were said to have drowned when their van was swept away by floodwaters, though no bodies have been recovered.

The National Hurricane Center Public Advisory for Harvey in an advisory Tuesday morning said that “catastrophic and life-threatening flooding continues in southeastern Texas and portions of southwestern Louisiana.”

“The level of rain that we’re seeing here is biblical,” David Krohn, a cantor at Houston’s Congregation Brith Shalom, told Haaretz. “It’s diluvian rain all day and all night, rain that keeps accumulating.”

Here are some of the Jewish organizations collecting funds for relief efforts: