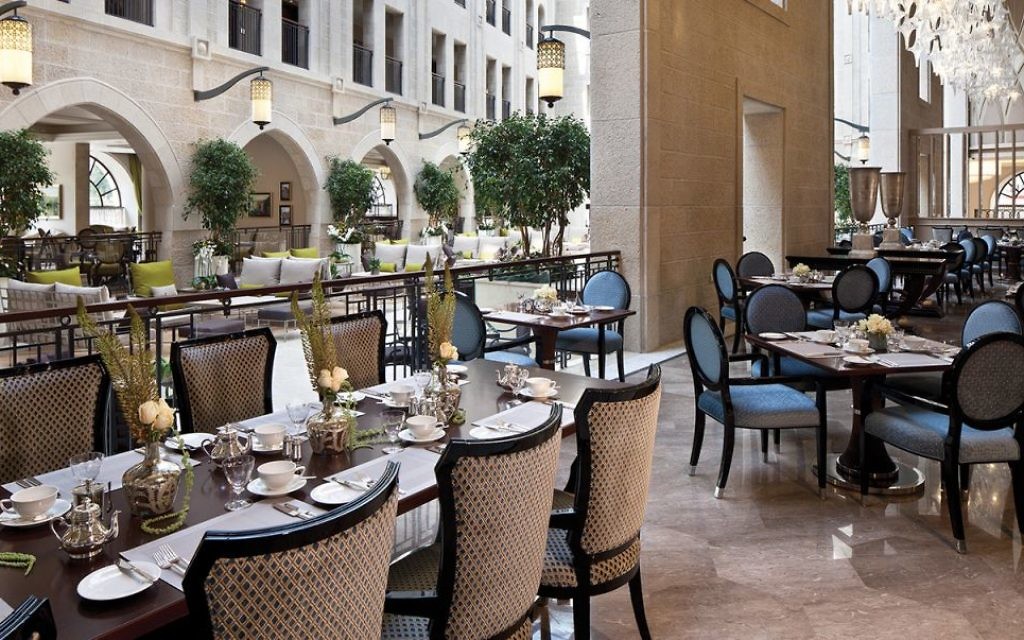 When the Hilton Hotels Corp. unveiled its Waldorf Astoria brand two years ago in Jerusalem, it not only changed the dynamics of the luxury hotel business in the Israeli capital, it spurred all five-star hotel owners across the country to upgrade their facilities and services in order to cater to upscale foreign tourists and business travelers.

Accentuating a unique combination of 1920s grandeur with modern elegance, the 226-room facility, located a few hundred yards from the entrance to the Old City, was praised last year by Conde Nast Traveler Magazine as the “Best Hotel in the Middle East.”

“From the minute a reservation is received,” Verses continued, “each guest is assigned a personal butler who is ready to assist with everything, even before you land. The butler can arrange chauffeured transportation and will know what the needs are of each guest from the minute they set foot in the hotel including business services, specific food requests and more.”

Though reservations are flagging at Jerusalem hotels, Verses insisted the Waldorf Astoria still has plenty of clientele. He added, “There are many people looking for and willing to pay for this product. Unlike other hotels who might offer special packages, we can’t do such things because that will mean that we would have to offer an inferior product. People who book with us will not pay more than any other upper-end hotel in the U.S. or Europe, and our guests know exactly what they will get.”

For the many couples, families with children and business travelers who don’t need butlers but still seek quality service and accommodations, the 283-room Inbal Jerusalem Hotel has been a popular venue.

According to Alex Herman, the hotel’s vice president of sales and marketing, “The Inbal awaits the upcoming summer season, having recently inaugurated newly renovated luxury suites. Our hotel is a favorite destination for visitors to Jerusalem and many are from the Metro New York-New Jersey region. The Inbal Jerusalem Hotel, one of Jerusalem’s finest hotels is also a doorway to the city’s grand culture, tradition and history.”

Herman added, “The Inbal is in walking distance to the city’s main tourist attractions, shopping areas and entertainment centers, and near unique and memorable historic sites. It recently has been recognized by TripAdvisor for both its Certificate of Excellence, and has been voted the most luxurious hotel in the TripAdvisor Travelers’ Choice Awards, a testimony to the satisfaction of our guests, many return time and again.”

In Tel Aviv, hotel occupancy rates this year have been higher than in Jerusalem, due to the growing numbers of business travelers and the fact that five-star hotels have upgraded their services. According to HVS, a respected British marketing company that services the global hotel industry, Tel Aviv is the fifth most visited city in the Middle East and Africa combined.

Jimmy Zohar, chairman of the Tel Aviv Hotel Association and general manager of the five-star Carlton Hotel, said, “The upgrades and changes in the local hotel industry, including the five-star hotels, began 10 years ago when Tel Aviv started to invest heavily in promoting itself as a major attraction and destination. Major city funding went into upgrading the beachfront promenade, Port of Tel Aviv, Port of Jaffa, Neve Tzedek, etc.”

One of Tel Aviv’s most popular five-star hotels among the business travel community, the InterContinental David Tel Aviv, has just finished a series of upgrades ahead of the summer season, when many families arrive for fun and sun.

InterContinental David Tel Aviv’s “Senses of Tel Aviv” experience is, according to the hotel, a comprehensive luxury insider program designed to give guests the keys to unlock the secrets of the city and immerse themselves in the local Tel Avivian vibe.

“We are delighted to offer our guests a unique and authentic insight into what makes the city so special,” said InterContinental David Tel Aviv’s general manager, David Cohen. “We look forward to exposing the best-kept secret of the Middle East — Tel Aviv.”

According to Zohar, over the next three years the Tel Aviv hotel industry will add at least another 600-700 “luxury class” hotel rooms, with the W Hotel in Jaffa and the Kempinski Hotel in Tel Aviv leading the way. Both the W (owned by New York real estate entrepreneur Aby Rosen) and Germany’s Kempinski luxury resort chain, compete with high-end brands such as the Waldorf Astoria in major cities all over the globe.

Zohar added, “These hotels will also be aggressively targeting upscale North American tourists, as well as business travelers, who seek the very best.”◆