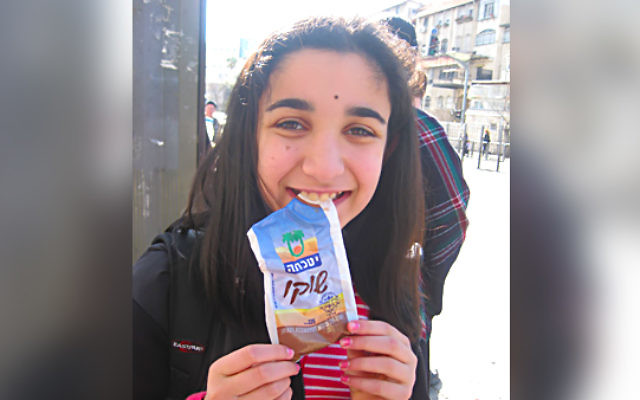 Who doesn't love drinking chocolate milk from a bag? Courtesy of Leora Pineles

Yom Ha’Atzmaut was pretty much the same for me every year in New Jersey — dancing to Israeli music, eating blue and white cupcakes and having activities in school with the shlichim (emissaries from Israel). It was very nice, don't get me wrong, but I didn't really feel a connection to Israel. Last year, when I made aliyah to Rehovot everything changed.

The whole atmosphere here is different around Yom Ha’Atzmaut. Every street is filled with Israeli flags and blue and white streamers. There are signs everywhere, including stores, wishing a “chag sameach” (happy holiday). And this all happens weeks before Yom Ha’Atzmaut. The actual day is filled with so much excitement, it's indescribable. No matter where you look it seems as if everyone is happy. At night, there are concerts and other activities everywhere. During the day, everyone has their own unique way of celebrating. Some barbecue, go to the beach, have family get-togethers and much more. The only businesses that are open are restaurants or places with holiday activities. It's impossible not to celebrate, unlike in New Jersey where even though there was a large Jewish community, we were outnumbered. It was also treated like a normal work or school day, so it was hard to celebrate.

Last Yom Ha’Atzmaut, my first in Israel, most of my friends were going to parties or making barbecues in the park, but my family decided to do something different. Instead of just celebrating the fact that we have a country, we wanted to give back to it. We joined other families to make a barbecue at an army base. We were enjoying our day-off and we wanted the soldiers on duty to do the same. While the adults grilled and prepared the food, the kids played soccer and hung out with the soldiers. Then we all served lunch to them. The soldiers really enjoyed having a meal unlike their typical military food and feeling pampered a little. Going to this base helped me appreciate soldiers in a whole new way.

We got a tour of the base, which was located in the south, and heard about what the soldiers do every day. I could not believe that they sleep in tents every night during their training. I remember how uncomfortable I was when I went camping for two days. I couldn't imagine doing it for a few months during army training. They also wake up extremely early to start their physical workouts. I had no idea how difficult it was to be a soldier. I started to appreciate them so much more after I learned what really happens under the cool uniforms and big guns that I had always admired.

While I was feeling appreciative and thankful for what they do for the country and imagining how hard it must be to join the army, a frightening thought occurred: this would be me in a few years. When I graduate high school in two years I will become one of these soldiers. So many thoughts went through my mind. What if everything is too hard for me? What if I'm miserable in the army? What if I'm a bad soldier? I eventually calmed down when the soldiers were telling us that once they got past the difficult parts, they were very proud of what they were doing to help our country. Although I am nervous about joining the army, I am even more proud and excited about working to protect our Jewish homeland.

As my second Yom Ha’Atzmaut in Israel is approaching, the beautiful decorations have reappeared along with the country-wide excitement. I’m eager to once again celebrate the holiday at an army base with soldiers. Last year’s visit was so meaningful, my family could not think of anything else we’d rather be doing. While all of you abroad are enjoying your falafel and Israeli music, I ask you to think about the soldiers, who risk their lives every day for our country. Without them there would be nothing to celebrate.