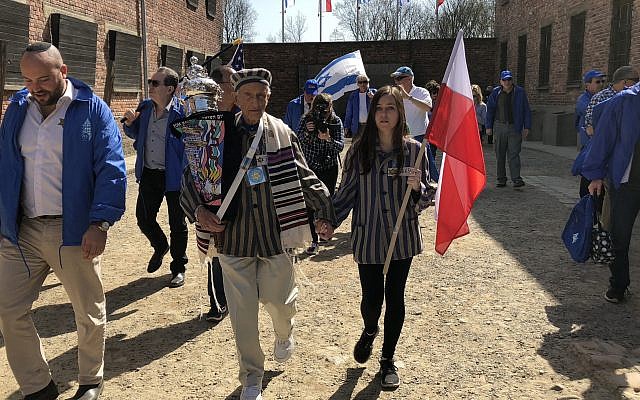 Edward Mosberg, holding a Torah scroll, takes part in the March of the Living in 2017 at the former Nazi death camp Auschwitz in Poland. (Courtesy of From the Depths via JTA/Via Times of Israel)

AUSCHWITZ-BIRKENAU, Poland — The surge in anti-Semitic attacks in recent years is reminiscent of the pre-World War II era in Europe, a Holocaust survivor warned Wednesday, with others agreeing that anti-Semitism is back in full force, a day before they participate in the annual March of the Living event.

“For years, I think a lot of survivors have had the feeling that times remind us of the 1930s,” Hedy Bohm told The Times of Israel at Birkenau, the Nazi death camp she survived 75 years ago.

“Unfortunately, I feel the same way too — that humanity hasn’t learned, that we are unable to learn. History repeats itself. We try to remember, we try to be smarter, we try, and that’s all we can do — keep on trying,” said Bohm, who will turn 92 on May 11. Born in Romania, she will be participating in her sixth March of the Living in Poland on Thursday.

This year’s march comes amid a sharp rise in anti-Semitic incidents, attacks and rhetoric worldwide, the latest of which was the synagogue shooting attack in Poway, California on Saturday in which one congregant was killed and three others were wounded, including an eight-year-old girl and the community rabbi.

On Wednesday, researchers at Tel Aviv University said that 2018-2019 saw “an increase in almost all forms of anti-Semitic manifestations, in the public space as well as in the private one.” Many Jews in the Diaspora feel increasingly insecure and are questioning their place in society, they said.

Capped by the deadly shooting that killed 11 worshipers at Pittsburgh’s Tree of Life synagogue on October 27, assaults targeting Jews rose 13 percent in 2018, according to the study.

A separate study by the Anti-Defamation League released this week showed an increase in violence against Jews in the United States.

“In Europe, in Canada, in the United States, anti-Semitism is back,” said Max Eisen, 90, who will be joining the March of the Living for the 21st time. “It has taken on a life of its own, it’s a terrible thing.” 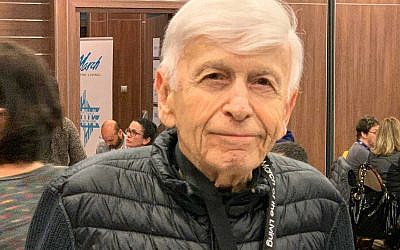 He gave a personal example for an anti-Semitic incident, when a poster with his photo next to a synagogue in Toronto was vandalized last July. The German word “achtung,” which was told to Jews by Nazis in concentration camps and means “attention,” was scrawled across his forehead in the photo.

“I know this word from Auschwitz,” Eisen said, “and it’s happening now in North America.

“Jews are not aware of what’s happening, and many of our people really don’t get it, so I’m trying to educate generations. I hope they can tell the story when we can no longer tell the story,” he added.

“Unfortunately, anti-Semitism is very much alive. I say that with a heavy heart,” said Renata Brailovsky, 88, whose family was able to escape from Germany to Chile before the Nazi extermination of Jews began.

“I’m feeling emotionally very distressed,” she said, adding that she has now made a one-time trip to Poland to participate in her first March of the Living.

“My goal is for my children to know I want to leave a legacy, of what it means to be Jewish,” she declared. “Am Yisrael Chai.”

The fears were shared by organizers of the annual event.

“I think that what we are going through today — not only today but over the last year or years — is a very significant increase in anti-Semitism,” Shmuel Rosenman, the chairman and co-founder of March of the Living, told The Times of Israel.

“The more we get farther away, and the number of Holocaust survivors living among us decreases, anti-Semitism is surging and raising its head around the world,” he continued. “I think that through Marches of the Living we can come and shout out to the world: We will not let this pass, we will fight this — not just us as Jews, but everyone — and that way, perhaps, we can prevent that from happening again.”

More than 10,000 Jewish and non-Jewish youth from 40 countries, along with dozens of Holocaust survivors and dignitaries from around the world, are set to participate Thursday in the 31st annual International March of the Living, the three-kilometer march from Auschwitz to Birkenau.

In a stark departure from last year, notably absent this time will be senior officials from the Jewish state and the host country, Poland.

Along with participating in Thursday’s march in Poland, the delegation will visit Israel.

A delegation of United Nations ambassadors will also participate in the march before going to Israel, remaining for next week’s Independence Day there. The diplomats are participating at the invitation of the American Zionist Movement and the International March of the Living.

In Israel, they will tour of the country to learn about the land, Jewish history and Zionism, receive briefings on security challenges, and participate in high-level discussions and meetings.