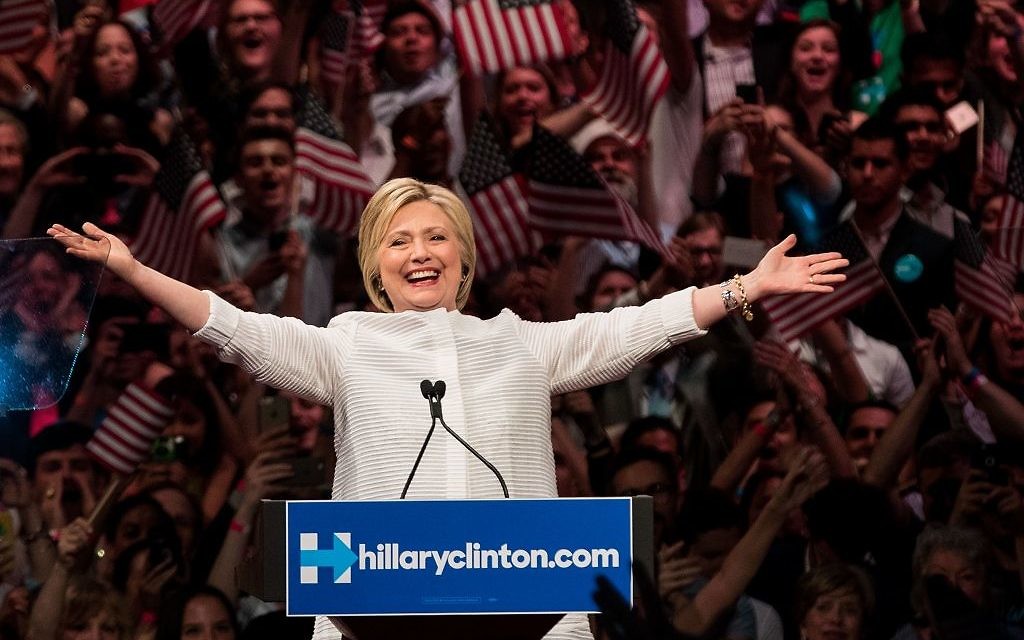 WASHINGTON (JTA) — With President Barack Obama’s blessing, Hillary Clinton claimed the Democratic presidential nomination, casting it as a historic win for women and appealing to Bernie Sanders voters to support her.

Donald Trump, the presumptive Republican presidential nominee, also pitched his case to supporters of Sanders, the Vermont Independent senator whose bid for the Democratic nomination is the most successful run by a Jewish presidential candidate in U.S. history.

The Associated Press had declared Clinton the presumptive nominee on Monday night, on the eve of nominating contests in six states, but she preferred to wait until after voting was over Tuesday to claim victory.

Obama in a statement released just before midnight affirmed Clinton, his first term secretary of state, as the winner.

“The president congratulated Secretary Clinton for securing the delegates necessary to clinch the Democratic nomination for president,” a White House statement said.

“Her historic campaign inspired millions and is an extension of her lifelong fight for middle-class families and children. The president thanked Senator Sanders for energizing millions of Americans with his commitment to issues like fighting economic inequality and special interests’ influence on our politics.”

The statement said Obama would meet Thursday with Sanders at the candidate’s request.

“The president looks forward to continuing the conversation with Senator Sanders about how to build on the extraordinary work he has done to engage millions of Democratic voters, and to build on that enthusiasm in the weeks and months ahead,” it said.

Sanders, speaking in Los Angeles, swore to stay in the fight at least until June 14, the date of the final primary in Washington, D.C. But he focused his attacks on Trump and acknowledged a “very gracious” phone call from Clinton, a signal that he is ready to pivot toward party unity.

The unity, he made clear, would be on terms that accommodated the changes he sought.

“We are going to fight hard to win the primary in Washington, D.C., and then we take our fight for social, economic, racial and environmental justice to Philadelphia,” the city hosting the Democratic convention in July, Sanders said.

A video montage preceding Clinton’s appearance on Tuesday evening at her headquarters in Brooklyn chronicled women’s progress through the American political system.

It included the suffragettes who brought about enfranchisement for women in 1919, Shirley Chisholm’s quixotic run for the Democratic nod in 1972 and Gloria Steinem’s leadership of the feminist movement in the 1970s. Also featured were Ann Richards, the late governor of Texas, and Tammy Baldwin, the Wisconsin senator who is the first openly gay woman elected to the Senate.

“It may be hard to see tonight, but we are all standing under a glass ceiling right now,” Clinton said when she emerged to cheers to speak. “The first time in our nation’s history that a woman will be a major party’s nominee.”

Much of her speech was aimed at Trump, who has been mired since becoming the presumptive Republican nominee last month in controversies over his broadsides against minorities.

“He wants to win by stoking fears and rubbing salt in wounds and reminding us daily just how great he is,” she said, calling Trump “temperamentally unfit to be president and commander in chief.”

She repeatedly subverted Trump’s slogan, “Make America Great Again. “To be great, we can’t be small,” she said.

Clinton also held out an olive branch to Sanders and his supporters after an at times bitter campaign.

“He’s excited millions of voters, especially young people,” she said, a nod to the majorities Sanders recorded among voters under 35. She commended the “vigorous debate” Sanders prodded on income inequality.

“We welcome you with open arms,” he said.

Trump, speaking from his eponymous golf club in suburban New York City’s Westchester County, hit Clinton on foreign policy, contrasting what he said were her failures with what he called his “America First” policy.

“It’s important to understand what ‘America First’ means,” Trump said, reading from a prepared speech, a rare departure from his extemporizing. “It means on foreign policy we will never enter into any conflict unless it makes us safer as a nation. It has to make us safer as a nation.”

The “America First” slogan has unnerved some, as it shares its name with the World War II-era movement that opposed intervention in the war and at times invoked anti-Semitic tropes. But Trump cast his policy as the best means of stopping Islamic terrorist groups like the Islamic State group, or ISIS, and of keeping Iran from acquiring nuclear weapons.

“This is the opposite of Hillary’s foreign policy, which invaded Libya, destabilized Iraq, unleashed ISIS and threw Syria into chaos and created the mass migration which is wreaking havoc all over the world, while putting Iran on the path to nuclear weapons and making them a dominant power in the Middle East,” he said.