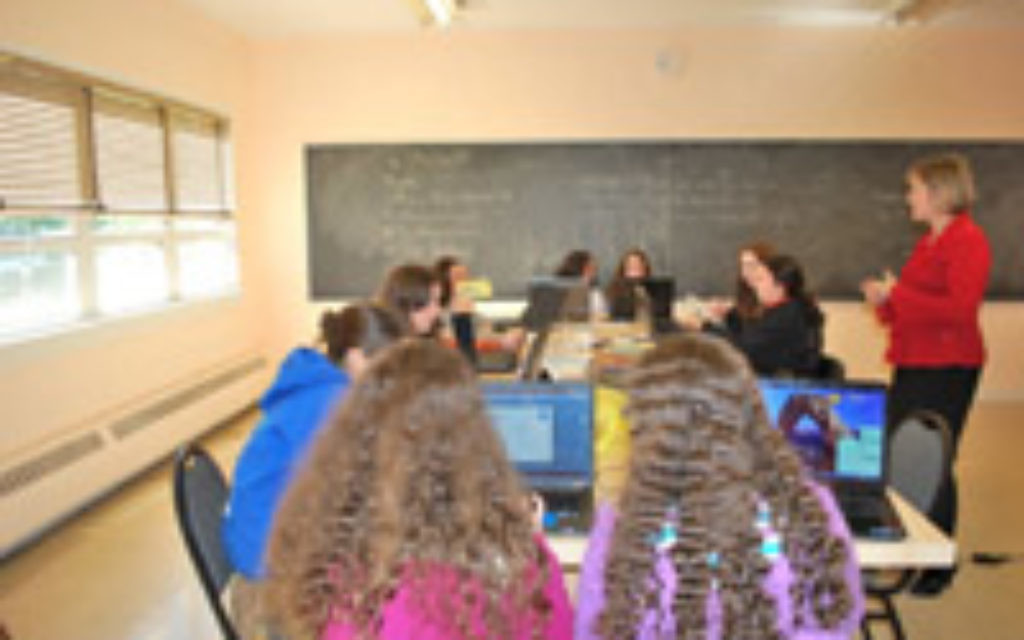 “Here, you can sit on the couch and be comfortable,” says Rochel Rina, an eighth grader. “You don’t have to be at a desk. You can eat whenever you want. It’s very relaxed, very flexible. I love how there’s no bells annoying you all day.”

But the Pre-Collegiate Learning Center of New Jersey, where tuition is only $5,000 and laptop computers are required, is not some slacker haven.
Instead, students here insist they are working hard and learning skills they’ll need in college, by taking a mix of online, in-person and video-conference courses, with supervision and guidance from faculty “coaches.”

As online courses and educational materials become cheaper and more widely available, growing numbers of Jewish schools are looking to them for cost savings and an opportunity to offer more individualized instruction. PCLC-NJ, which opened with 20 students in grades eight through 10 this fall, is one of three brand-new Jewish schools founded on the twin pillars of “blended learning,” a combination of online and in-person instruction, and low tuition.

This fall also marked the opening of Baltimore’s Ohr Chadash Academy, a Modern Orthodox school with 89 students in kindergarten through sixth grade — and tuition of $7,500. Meanwhile, Yeshivat He’Atid — which will open in fall 2012 in Bergenfield, N.J., with tuition of $8,990 — already has 110 students registered and was one of seven programs receiving a “day school affordability” challenge grant from the Orthodox Union last week.

Online education is coming under increasing scrutiny — a New York Times article this week pointed to high attrition rates and poor achievement at the growing number of public and charter schools operated by K12, a leading for-profit in the field. But advocates for these new Jewish day schools say that the “blended” approach — in which computerized classes are balanced with face-to-face ones, and in which students attend a bricks-and-mortar school with peers and teachers, rather than isolated at home — offers the benefits of online education without its pitfalls.

Rabbi Netanel Gralla, Yeshivat He’Atid’s principal, says his school’s “overall goal is to utilize technology to enhance the learning experience,” adding that “This is not a model where we get rid of the teacher and place the kid in front of a computer. Close interaction with teachers and a peer-to-peer collaborative environment is key.”

Lauren Ariev Gellman, PCLC-NJ’s director, emphasizes that her school is not an “Internet school.”

“Only 30 percent of the classes are computer-based, and the students are in the building all day,” she says.

Officials at all three argue that technology increases quality — allowing them to tailor instruction to individual students’ abilities and interests, more easily assess student progress, enhance communication between teachers, parents and students, and make better use of faculty time.

“It changes the teacher more to a doctor,” says Noam Davidovics, technology chair at Ohr Chadash. “Instead of teaching one lesson for the whole class, they’re working with each child. Every school likes to talk about differentiated education, but when you have one class and a wide range of abilities it’s difficult for the teacher to actually do that. This gives them the tool.”

While He’Atid will open with only pre-K through second grade, then add a grade each year, Ohr Chadash began with seven grades, in part because it was created to replace Yeshivat Rambam, a school that closed last year for financial reasons.

One of a handful of Jewish day schools with a one-to-one iPad program (in grades four through six), Ohr Chadash is using a variety of tech tools for secular and Judaic studies, mostly in the upper grades, including Khan Academy online math courses; Dah Bear, a website that helps teachers make computer games using Judaic content; ShowMe, teacher-created videos that enable children to hear a text and see it highlighted on the screen; and apps that contain Bible text and commentary.

The technology reduces the need for “resource rooms,” where kids get extra help or extra enrichment. It also allows for higher student-teacher ratios and the elimination of some assistant-teacher positions.

While the student-teacher ratio at Ohr Chadash is currently one-to-10, Davidovics says, “We want to get that up to one-to-20.”

So far, the teachers at Ohr Chadash seem happy with the new approach.

“I’ve been teaching for years and years, and this is my best year yet,” says Devorah Werdesheim, a fourth- and sixth-grade general studies teacher at Ohr Chadash.

She also finds online tools, such as grading papers through Google Docs rather than on a hard copy, and having students communicate with her by e-mail, helpful.

“Because I have this e-mail relationship with them, they tell me things they wouldn’t tell me in class or face-to-face,” she says. The only problem, however, is that her students think they can e-mail her — and get a reply — around the clock.

“It is more demanding for me, because the boundary between school and home is not so clear, which my husband is not crazy about,” she says.

Elisheva Erlanger, a Judaic studies teacher at Ohr Chadash, says the technology makes it easier for her to run a class in which “some students are just about ready to read the Rambam on their own, whereas others can barely read a [section of biblical text], let alone translate it.”

In addition to reading the texts on their iPads, the students collectively present what they’ve learned by making “virtual posters” that include images, audio and video.

“Everyone can help each other in different ways,” Erlanger says, noting that “one student is very weak when it comes to translating psukim, but she’s the one everyone goes to when they have a tech problem.”

Both teachers emphasize, however, that it wouldn’t be possible to integrate technology in the classroom without strong Information Technology (IT) support.

At Ohr Chadash that comes for free, from Davidovics, a software engineer at the University of Maryland School of Medicine Institute for Genome Sciences who has researched equipment and tools, trained faculty and responded to teachers’ questions.

Any school that opts to pay for word processing, spreadsheets, e-mail and other software “is really stealing money from the parents,” Davidovics said, adding that using the cloud (the school makes regular backups onto a hard drive), rather than installed software, enables his school to use “old donated computers” rather than newer (and more expensive) ones.

IT “costs can get out of control,” he said. “It’s important for schools to analyze the costs of infrastructure.”

At PCLC-NJ, students are in the building, a low-slung postwar structure formerly used by the Solomon Schechter of Raritan Valley, each weekday from 8 a.m. to 4:30 p.m.

The online classes include Khan Academy science and math courses and foreign languages offered by Rosetta Stone. Face-to-face classes take place around seminar tables — or, for the video-conferenced-from-Israel courses — at tables facing a TV screen.

In addition, each student meets regularly with a “coach” to assess their progress, help stay organized and ensure they are keeping on top of all their assignments.

At a recent coaching session, Ruth Margolin, PCLC-NJ’s assistant director, reviewed each course and each assignment with a 10th grade girl named Rachel. For the online classes, which included math, chemistry and French, Margolin could check from her own computer how many hours the girl had logged in, which lessons and quizzes she’d completed and how well she had performed.

Reviewing a list of upcoming deadlines — including a history research paper, a short essay about a medical achievement involving chemistry a dvar Torah — Margolin repeatedly urged the girl to articulate “how are you going to get that done?” and offering suggestions on how to juggle different assignments.

In an interview later with The Jewish Week, Rachel said the coaching was “helpful” and “keeps you on track.”

While she likes the school (other than the tiny size of its student body, a point of contention for many), Rachel emphasized, “It’s not for everyone. You have to want to learn this way. You’re not forced to sit in a class — you have to do you work and get it done.”

David, another 10th grader (and one of only three boys in the school), said, “It’s easier to pay attention to a computer than a teacher,” adding that “you don’t have a teacher screaming at you to do your work.”

Margolin, whose previous work includes running a synagogue-based Hebrew high school and serving as a national director of the Reform movement’s youth group, said the PCLC-NJ approach is a good preparation for college.

“They’re getting the skills of independent learning, time management and a sense of personal responsibility,” she said.

Students seem pleased so far, with many saying they like the opportunity to work at their own pace. Two classes with Israeli teachers via videoconference (through the Lookstein Center at Bar-Ilan University) also got high marks.

Jan Hader, whose daughter Jessica is an eighth grader at PCLC-NJ, said she was drawn to the school because of its combination of academic offerings and its low price tag.

“If you have a child who’s motivated to learn, has drive to learn, I think it’s a great school,” she said. “I’ve been very impressed. … It’s adapting to today’s world of using technology, but also having the best of both worlds.”

This article is part of the series “21st Century Jewish Ed." Next in the series: iPads in Jewish schools.