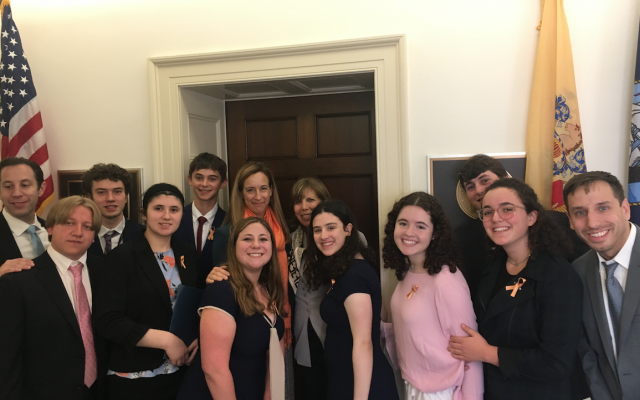 About a week ago I, along with eight other high school students, embarked on a fascinating trip to Washington, D.C. The two-day excursion, planned by the Jewish Federation of Greater MetroWest NJ, aimed to provide Jewish teens of northern New Jersey with the opportunity to meet with and lobby their representatives to make a legitimate legislative impact on the issue of gun violence.

Since the devastating mass shooting at Marjory Stoneman Douglas High School in Parkland, Florida in March 2018, a wave of student activism has spread across the country, and MetroWest is no exception. About a year ago, a similar lobbying trip was organized that brought high schoolers to Trenton, N.J., to speak with representatives just before a set of gun control bills were voted on. After speaking with the lawmakers during that trip, we sat in the gallery and watched as the very representatives we had just spoken to cast their votes. All seven of the gun safety measures passed that day, and the successful trip left participants eager for another opportunity—the impetus for last week’s lobbying mission.

This brings us to Tuesday, June 4, when our group of nine MetroWest teens boarded a train and travelled to Washington, D.C. Our goal was similar to that of the previous trip: to speak with lawmakers about gun violence and learn something along the way. We began by meeting with representatives from the Giffords Campaign, an organization dedicated to ending gun violence. There, we learned how gun violence affects the nation, as well as what to expect when meeting face-to-face with members of Congress. We spent our remaining time that day at the Holocaust Museum, Lincoln Memorial and exploring Georgetown.

We awoke early the next morning to meet with Stephan Kline, a representative from the policy division of the Jewish Federation of North America, who talked to us about the legislative priorities of his department and how he plans on carrying them out. It was interesting and helpful to learn about how Jewish values can direct governmental advocacy and policy.

It was interesting and helpful to learn about how Jewish values can direct governmental advocacy and policy.

The next stop on our packed agenda was Capitol Hill, where we met with four Congressmen and women from New Jersey—Donald Payne Jr., Bonnie Watson Coleman, Mikie Sherrill, and Tom Malinowski—along with staff from the offices of both New Jersey senators, Cory Booker and Robert Menendez. During the meetings, we discussed the importance of gun violence prevention and what Congress can do about it. Many of our conversations centered around the background check bill that passed the House of Representatives in late February of this year. It marked an historic milestone for gun control advocates, as it was the first significant piece of gun legislation to pass in a quarter-century.

While this bill’s success is certainly reason for celebration, there is a long road ahead before it can become law. The first roadblock is Mitch McConnell, the Senate Majority Leader. He controls which bills the Senate debates and votes on, and has publicly opposed the bill, which would simply require background checks for ALL gun purchases, including those done at gun shows or online. Experts are in agreement that this bill would save innumerable lives, but McConnell, afraid of losing his majority, refuses to introduce it.

This stonewalling tactic has frustrated lawmakers and citizens alike, including the teens who participated in the recent lobbying trip. We urged our representatives to lean harder on their colleagues to pass the bill, and we kept pushing even when some tried to change the subject. Although we were firm in our pressing of Congresspeople, we also had insightful discussions with them and discussed potential paths to gun violence prevention bills moving forward.

This trip was empowering, profound, and gave participants, including myself, a keen and first-hand understanding of how our nation’s government functions. I would love to do it again someday and urge fellow high schoolers to do so too.

Caleb Levine is a freshman at Montclair High School in Montclair, N.J.