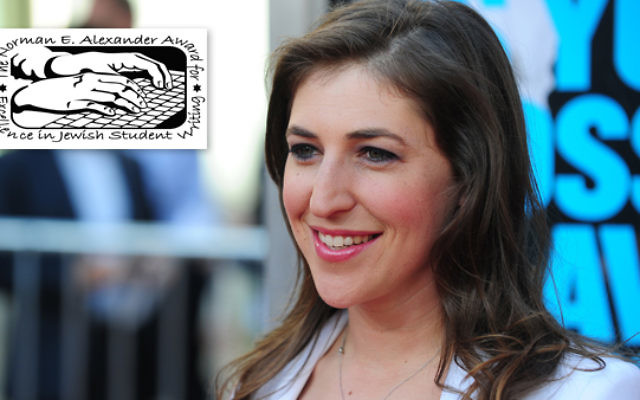 Mayim Bialik balances her fame with her Judaism and a boatload of other commitments. Getty Images

Editor’s Note: Naomi Gluck was a finalist in The Norman E. Alexander Award for Excellence in Jewish Student Writing. The national contest sought essays on a Jewish American who has made a significant impact in the field of television, film, music or theater. Writers were asked to identify the person’s lasting legacy on them or on American culture. The contest was sponsored by the Jewish-American Hall of Fame and The Jewish Week Media Group.

In May my rabbi announced that our shul was hiring a female clergy member. As a femi-nist, I was excited about this announcement. Then came the catch: instead of being called rabbi, she would be called “morateinu,” our teacher. It is a lovely title, but it leaves me with a knot in my stomach — it is unfair that she cannot be called “rabbi.”

I love parts of Modern Orthodoxy; I love walking into the main sanctuary and hearing everybody singing the same prayers that our ancestors sang. I love the close community that supports its members through good and bad times. I love working in the childcare program and fostering a love for Judaism in the children in my group.

But there are parts of my shul that make me uncomfortable. The mechitza (a separation between men and women) glares at me from the center of the main sanctuary, and it is difficult to accept that if I wanted to read Torah in the main sanctuary, I couldn’t. I struggle with listening to the children in my childcare group chanting, “Thank you God for not having made me a woman.”

In truth, all of this made me furious, but I’m not the type of person to publicly voice her anger. In my mind there were only two responses to the double-edged sword of Modern Ortho-doxy: abandon it completely or ignore the parts that make me uncomfortable.

The famous actress Mayim Bialik gave me a third choice. Bialik, who stars in CBS’ “The Big Bang Theory,” is a Modern Orthodox Jew who works tirelessly to bridge the gap between the Orthodox and the secular world, and she does not take the easy way out.

In her column on the Jewish website Kveller, Bialik writes about the difficult and the controversial, including topics like Zionism and feminism. She wrestles with certain ideas, and allows her readers to see her struggle. Though she wrestles, she “refuse[s] to throw out the Orthodox baby with the Orthodox bathwater.” She does not retreat when she encounters something problematic. Instead, she grapples and ultimately grows. Her columns sparks important discussion and debate.

Right after my shul hired its first female clergy member, I was relieved to see Bialik had posted a response. She was thrilled about the new addition, though she did not ignore the ele-phant in the room: the clergy member would not be called “rabbi.” While Bialik was bothered by that, she recognized that it is an important step in the right direction. She said,“It means it’s a work in progress. I have patience.”

Bialik has taught me that I should not be embarrassed to grapple with certain beliefs or practices. With her lessons ringing in my ears, I reached out to my rabbi to discuss a blessing that frustrates me — the blessing when men thank God for not having made them women. Without discussion and debate, Judaism would die out. Inspired by Bialik, I will play my role in ensuring its survival.