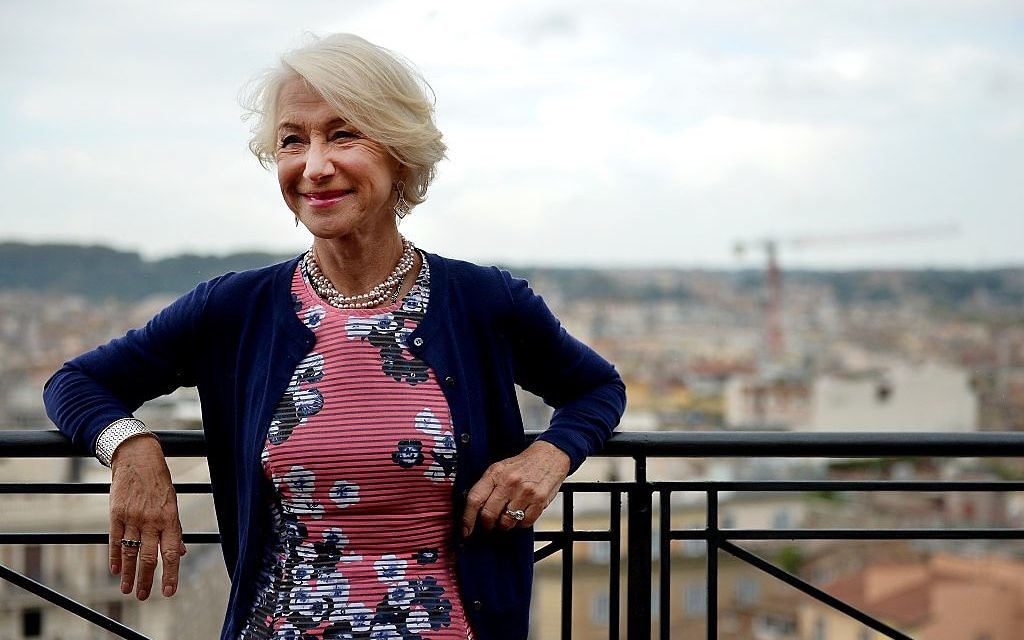 Actress Helen Mirren, who portrayed a Holocaust survivor’s successful quest for the return of her family’s Nazi-looted paintings in the movie “Woman in Gold” urged passage of legislation that would make it easier for victims and heirs to recover their looted art.

“Restitution is more than reclaiming a material good,” Mirren said in testimony last week before the Senate Judiciary Committee. “It is a moral imperative. Art restitution has very little to do with potential financial gain. It is about preserving the fundamental human condition. It gives Jewish people and other victims of the Nazi terror an opportunity to reclaim their history, their culture, their memories and most importantly, their families.”

Mirren, who in the movie portrayed Holocaust survivor Maria Altmann, observed that the Nazi theft of Jewish-owned art was “not only unjust, but it was unconscionably inhumane.”

She noted that at the time the movie was released, she was appearing in a play on Broadway and that many of those in the audience who waited to see her after the play told her that they had an experience similar to Altmann’s.

“Every night, people would approach me and say, ‘That’s my family’s story … that’s what happened to us.’ It is extraordinary how many people share Maria’s story,” she said. “Victims of Nazi theft should not have to commit the resources Maria Altmann had in order to recover what is rightfully theirs.”

“Art is a reflection of memories that are shared across familial and cultural lines,” Mirren added. “When the Jewish people were dispossessed of their art, they lost their heritage — memories were taken along with the art. Having no memories is like having no family. That’s why art restitution is so imperative. The lives of so many people could be rejuvenated through the action and the leadership of the U.S. Congress to insure that fair and equitable solutions in these cases are assured.”

Among others who testified in behalf of the legislation were Ronald Lauder, chairman of the World Jewish Restitution Organization and president of the World Jewish Congress, and Sen. Charles Schumer (D-N.Y.), one of the sponsors of the bill, known as the Holocaust Expropriated Art Recovery Act.

In his remarks, Schumer noted that although there are “so many things we can never recover from the Holocaust — so many lives taken from us — it is our moral duty to help those survivors and their families achieve what justice can be found. …

“The Nazis tried to end European Jewry totally and irrevocably, including the rich intellectual, artistic, and cultural history of the Jews in Europe. They failed. But there is still work to be done to help the survivors and their families reclaim treasured family heirlooms that were stolen from them. Pieces of art that were stolen from Jewish families by the Nazis have been passed down and sold on through the years, even though there are survivors and descendants out there who are the rightful owners.”

Schumer said that after seeing the movie “Woman in Gold,” he called Lauder and the two developed the proposed legislation “changing the statute of limitations to allow victims and their families to bring their claims to court once they identify the location of a piece of art that was stolen … instead of when the crime was committed.”

“It is a drop of justice in what was an ocean of injustice — but it is our duty as legislators to give it to these families,” he added.

Meanwhile on the eve of a new round of talks with the German government, the U.S. House of Representatives unanimously approved a resolution urging Germany to increase funding for care to aging Holocaust victims.

The resolution calls upon Germany to “reaffirm its commitment and fulfill its moral responsibility to Holocaust victims by ensuring that every Holocaust victim receives all of the prescribed medical care, home care, mental health care, and other vital services necessary to live in dignity and by providing, without delay, additional financial resources to address the unique needs of Holocaust victims.”

The Conference on Jewish Material Claims Against Germany, which will negotiate with Germany for the additional funding, welcomed the move.

“The steadfast support of the U.S. government has been crucial to our efforts to obtain a small measure of justice since the founding of the Claims Conference,” said Greg Schneider, the group’s executive vice president.

In a statement, Ros-Lehtinen noted that it has been more than “71 years since the end of World War II, and even though they’ve lived through the unspeakable atrocities at the hands of the Nazis, Holocaust survivors today continue to face lingering injustices. It would be a travesty if humanity once again failed these individuals by ignoring their plight. … Time is of the essence and survivors can no longer afford these delays — they deserve to live out the remainder of their days in the dignity and comfort they deserve.”

Deutch said in a statement: “As the survivor population ages, we are at a critical moment in history and the German government must live up to its promise to meet all the needs of survivors once and for all. Now is the time for real and meaningful action.”

A concurrent version of the bill has been introduced in the Senate and consideration is expected shortly.