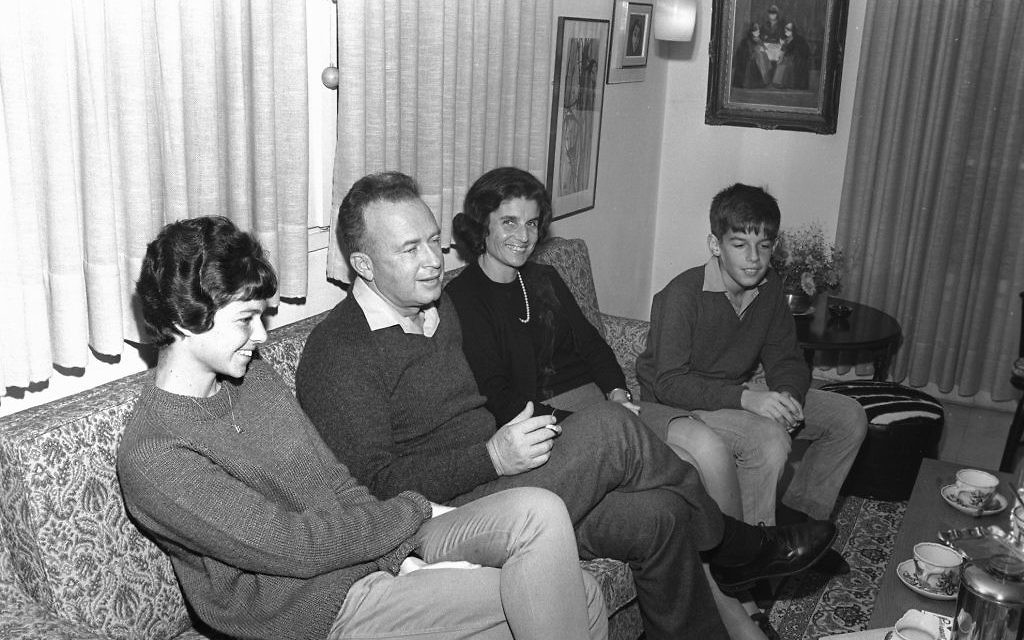 Erez Laufer was 5 years old when he first met Yitzchak Rabin. Laufer’s father taught at the Kadoorie boarding school, a Rabin alma mater, and when the then – chief of staff of the IDF landed in the family’s yard in a helicopter, Erez was there to greet him.

Laufer, the director of “Rabin in His Own Words,” which opens on Friday, May 6, has another memory that links Rabin and helicopters, but it is much more painful.

The filmmaker lives in Tel Aviv, in close proximity to Kings of Israel Square, as it was known 20 years ago. On Nov. 4, 1995, he eagerly attended the peace rally there, at which Prime Minister Rabin was the main speaker.

“Ten minutes before the end, I left to go home,” he says. “When I got home, I heard the helicopters. …”

Rabin had been murdered by religious nationalist Yigal Amir.

In a Skype interview from Toronto, where the film is playing in the Hot Docs Festival, Laufer says, “I remember the rally well because it was very moving. We all felt it was important to go, to support the peace process. It felt very powerful.”

Two decades have passed and Laufer’s film is one of two Israeli features released domestically on the anniversary of the assassination; both dealt with Rabin’s legacy, and both are excellent, in very different ways. Amos Gitai’s “Rabin – The Last Day” is an investigative docudrama about the killing and its aftermath. “In His Own Words” is something else — a highly thoughtful biographical nonfiction film that takes viewers from Rabin’s childhood to the moments before the shots that killed him.

“I wanted to learn about him, the way he saw himself,” says Israeli filmmaker Erez Laufer. Photos courtesy of Menemsha Films

In short, the film is about Yitzchak Rabin’s life, not his death.

The decision to structure the film chronologically (with the brief exception of the first scene, a television interview that Rabin gave in 1977, at the end of his first stint as prime minister) was an instinctive one for Laufer.

“A producer friend had said, ‘We have to do something for the 20th anniversary,’” Laufer says, standing against a wall in his hotel room, fighting off jet lag. “There are many subjects I care about, but I don’t make a film about them if I don’t think I can make a good film. This one came to me almost immediately.”

The film would be a cinematic “autobiography” told entirely using Rabin’s own words, drawing not only on his published memoirs, countless interviews, news footage and public declarations, but also personal letters, other private papers and some never-before released audiotapes.

Laufer explains, “When I decided to make the film I didn’t interview anyone. I just took everything from archives, his writing, his letters. I wanted to learn about him, the way he saw himself.”

By choosing to maintain the chronology, Laufer diminished his directorial presence and may have effaced himself from the film, but that suits him.

“I think you want to give the feeling that someone is telling his life, and not that you are a smart director and editor,” he says with a small smile. “Otherwise you are putting yourself in the front, not Rabin. If you want to get people emotionally connected, [the film] has to be chronological.”

He succeeds exceptionally well. At 100 minutes, “Rabin in His Own Words” is compact, almost brisk in its delineation of a complex and private man. Rabin’s father was a laborer, his mother a star of the Israeli polity, a union activist and Tel Aviv city councilmember. The son expected to be a farmer, graduating with honors from Kadoorie Agricultural College, but history intervened and he became one of the most prominent commanders in the Palmach and the IDF, rising to the rank of chief of staff of the latter group and, eventually, to prime minister.

As the film deftly illustrates, Rabin was both shy and blunt. He had a dry sense of humor that seems to have been missed by many observers but which provides several of the film’s high points. He was a plain speaker who reminds one of Harry Truman in his unconcealed disdain for his more unreasonable opponents, of whom there were many.

“If Israel had elections today, only Rabin could beat Bibi,” Laufer says ruefully, referring to the current prime minister, Benjamin Netanyahu. “He wasn’t some leftist from Tel Aviv, he was the head of the IDF. There are many things that we all know to be true now, but you hear him say them for the first time. In 1976 he says he doesn’t want Israel to be an apartheid state, he says that the settler movement is ‘a cancer in the tissue of Israeli society.’”

Laufer readily acknowledges that he has something of an agenda for the film.

“Look, I didn’t make the film to glorify Rabin’s name,” he says. “When you make a film about a person, you spend so much time with them, you sort of fall in love. But this film is aimed at the future. All the issues that Rabin faced are in place now, only much worse. The voyage of Rabin is so relevant today.”