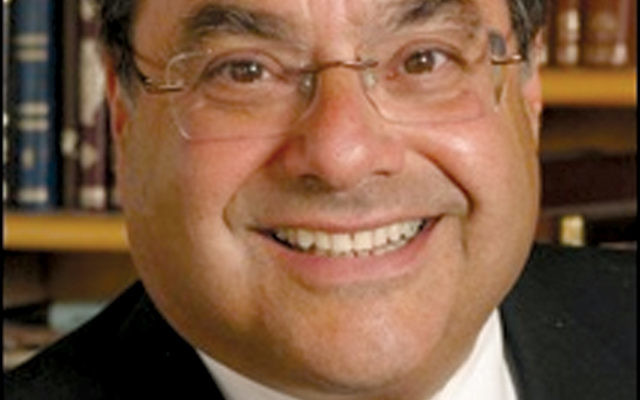 “Sarah died in Kiryat Arba, which is Hebron. … And Abraham came to eulogize Sarah and to weep over her.”[Genesis 23:2]

What was Sarah doing in Hebron? Abraham, Sarah and Isaac lived in Beersheba. The text even tells us Abraham had to “come” to weep over her; apparently he wasn’t with her when she died.

In order to understand Sarah’s whereabouts, it is first necessary to realize that her prophetic powers were greater than Abraham’s. You will remember that when Sarah tells Abraham to banish Hagar and Ishmael, the issue was “very grievous in the eyes of Abraham,” but God says to Abraham: “Let it not be grievous in your eyes. Whatever Sarah says to you, listen to her voice” [Gen. 21:12]. Rashi adds, “We learn from here that Abraham was second to Sarah in prophetic power.”

The truth of that Midrash is borne out by the subsequent text. After Sarah died, Abraham lived another 38 years, remarried and fathered another six sons [Gen. 25:1¬6]. Nevertheless, there is not one biblically transmitted conversation between God and Abraham during all these years. Indeed, the only recorded event is Abraham’s desire to choose a wife for Isaac, but in Sarah’s absence he leaves the choice to Eliezer, his aide. Apparently, Abraham was the rav (rabbi) because Sarah was the rebbetzen (rabbi’s wife).

From this backdrop, let us take a fresh look at the drama surrounding the akedah. Abraham rises “early in the morning” to set out with Isaac, firewood, a slaughtering knife and food and drink. A discussion certainly ensued. “Where are you going?” asks Sarah. “To do God’s bidding,” answers Abraham. “What did God ask you to do?” asks Sarah. “To make a sacrifice,” answers Abraham. “So why do you need our son, Isaac?” asks Sarah, “and where is the lamb?” And so Abraham repeats God’s precise command: “Take now your son, your only son whom you love, Isaac, and bring him up there as a dedication [an ola] on one of the mountains which I shall point out to you” [Gen. 22:2].

Sarah is beside herself. “You don’t need the slaughtering knife,” she cries. “You are misinterpreting God’s words. The Almighty God, who taught us that ‘one who sheds innocent blood shall have his blood spilled, since the human being was created in the ‘Divine image,’ could not possibly have meant for you to slaughter our innocent Isaac. And besides, God promised you, in my presence, that ‘through Isaac shall be designated your special seed.’ I tell you that you are misinterpreting God’s command.”

Abraham refuses to listen. After all, he heard God’s words, to bring up Isaac as an “ola” (although built upon a verb which means to ascend and dedicate, ¬in actual practice means “a whole burnt offering”). Abraham has no choice but to leave with Isaac, the firewood and the slaughtering knife.

In fact, Sarah was correct. Yes, God purposely conveyed an ambiguous command because subsequent generations of Jews — subject to exile, persecution and pogrom — would be forced to see their children slaughtered on account of their faith; these future parents and children would find inspiration in Abraham and Isaac as symbols of devotion unto death, as ensigns of Jewish willingness to make the ultimate sacrifice for God, Torah and Israel.

But such martyrdom is not the ab initio desire of our compassionate God. The Sages of the Talmud [Ta’anit 4a] corroborate the thrust of the words I put in Sarah’s mouth; they interpret a verse in the book of Jeremiah [19:5] regarding human sacrifice: “‘I did not command them, I did not speak of them, they did not enter My mind.’” It is on this basis that Rashi comments on the word “And lift him up” [Gen. 22:2]: “[God] did not say ‘slaughter him’ because the Holy One, blessed be He, did not want Isaac slaughtered; He merely said ‘lift him up,’ on the mountain, to make of him a dedication, and once he [Isaac] agreed to be dedicated [in life], He [God] said he was to be brought down” [Bereshit Raba 56, 8]. And, indeed, Isaac is referred to in the Midrash as a “pure dedication” (an¬ “ola temima”) for the rest of his life.

I would suggest that once Sarah realized that she couldn’t convince her husband, her only recourse was to attempt to convince the Almighty to step in and prevent a tragedy. She leaves her home in Beersheba and goes to pray in Hebron, at the Cave of the Couples (now known as the Ma’arat Hamachpela, the Tomb of the Patriarchs) where Adam and Eve were buried. It was important for her to pray in Hebron because that was the place of the “Covenant Between the Pieces,” when God promised Abraham eternal progeny, and that was where God sent his messengers to tell Abraham that he and Sarah would miraculously have a son “through whom his special seed would be designated.”

Sarah prayed until her heart gave out. She died in Hebron, and Abraham came there to bury, eulogize and weep over his beloved wife. He understood that without Sarah, his life with God was over, but through whom the destiny of Israel had been secured forever.