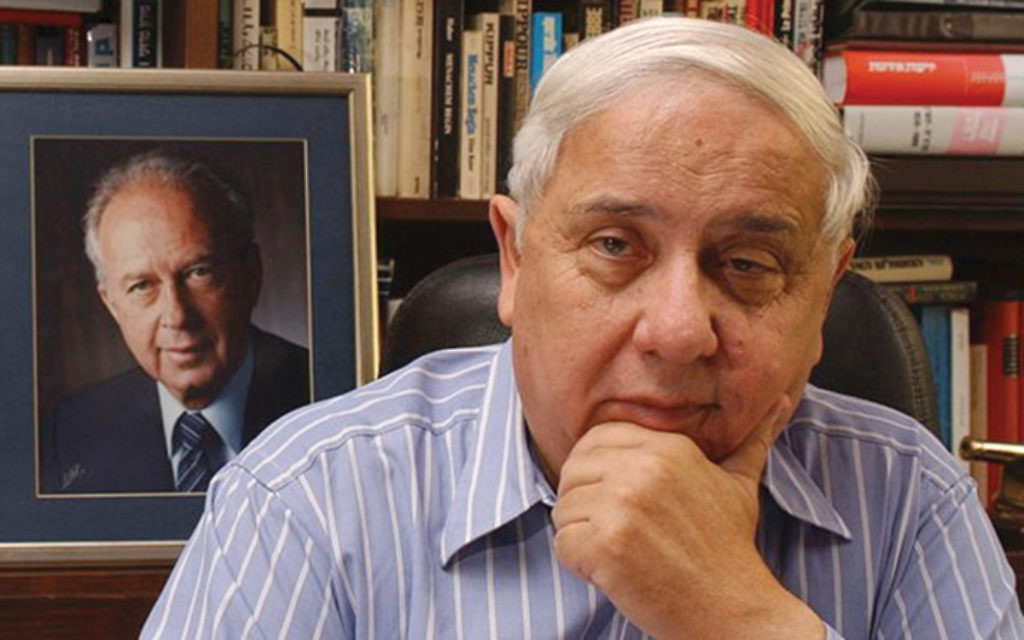 Ramat Gan, Israel — He still thinks about his old boss all the time. Still refers to him simply as “Rabin.” Still thinks — “almost every day, all day” — about what Yitzchak Rabin, the slain prime minister, would think of the latest political or military news. What would Rabin think about Iran? About the Israeli budget? About the “quality of life” in Israel today?

Rabin’s closest aide and the man who penned his lofty speeches, Eitan Haber is sitting in the lobby of the Kfar Maccabiah hotel here on the grounds of the Maccabiah sports complex, near Haber’s home in this upscale suburb of Tel Aviv.

With a full head of white hair and a typical Sabra’s uniform of open-collar, short-sleeve white shirt and black pants, he has the same gruff personality that some said characterized Rabin’s image. At 75, he still snaps at questions he considers uninformed, and, though most of the interview was conducted in English, he challenges an American-born translator’s rendition of the answers he decided to give in Hebrew.

That day 20 years ago, when a religious nationalist student named Yigal Amir pumped two bullets into Haber’s boss’ back, is, of course, etched in his, and all Israelis’, memory. People here remember the details of where they were when they heard the news, just as Americans of a certain age remember the exact details of the day President John F. Kennedy was killed.

But when the topic of the assassination comes up, Haber speaks about it unemotionally, stoically.

On the morning of Nov. 4, 1995, Haber spoke with his boss — for the last time, it turned out. By phone, early that Saturday, they arranged to meet that night, after a peace rally Rabin was to attend in Tel Aviv and a party for an Israeli diplomat Haber was to attend near Tel Aviv. They were to review the prime minister’s schedule for that week.

Instead, Haber, who had met Rabin three decades earlier when Haber was a reporter for the Israeli Army Bamachane newspaper and Rabin headed the Army’s Northern Command, rushed to Ichilov Hospital when news of the shooting reached him. And it was Haber who announced “in dismay, in great sadness, and in deep sorrow” Rabin’s death at an assassin’s hand that evening. Less than two days later Haber delivered a eulogy, “the final speech,” at Rabin’s funeral, declaring, “Yitzchak, we already miss you.”

Haber, a prolific author and veteran military correspondent who in the two decades since the assassination has returned to his career as a journalist, and as a businessman — among other jobs, he serves as a representative of Korean businesses — is often recognized on the streets of Israel.

A behind-the-scenes adviser and speechwriter for Rabin in the years before Rabin’s murder, Haber became a public figure afterwards. One image is seared into the minds of many Israelis: Haber, at Rabin’s funeral, holding up the blood-stained piece of paper that bore the lyrics of “A Song for Peace” that Rabin had sung in Kikar Malchei Yisrael (Kings of Israel Square) minutes before he left the stage and was shot.

In the wake of the assassination, and the subsequent collapse of the Oslo peace process, there are tantalizing “alternate history” questions that are never far from the surface. How would history be different if Rabin were still alive? Would peace have taken hold? Would the religious nationalist movement have taken off?

There is a set of more personal questions that seem irresistible as well: What would Rabin see as his legacy? Would he feel vindicated for the political — and personal — risks he took for supporting Oslo?

And there are the inevitable questions of leadership: If he were alive today, how would Rabin have met the challenges his successors have faced in these last two decades?

Haber refuses to answer any of these questions. He stays out of the prediction or speculation business, he says. “There is no ‘if’ in history. History doesn’t recognize the word ‘if.’”

One question he does answer: Did Rabin, the object of death threats and vociferous right-wing rallies by opponents of the rapprochement with the PLO, fear being killed? “No. Never. That a Jew would do it? Never.”

An aide to the Labor Party’s Rabin, Haber wrote a biography of the Likud Party’s Menachem Begin. Not doctrinaire or narrowly partisan in his political views, he often speaks for many Israelis when he writes.

In print he remains a curmudgeon, often challenging Israeli accepted wisdom across the political spectrum. In an essay headlined “Enough with the illusions” earlier this year on the Ynet website, he challenged a series of assumptions that “Israelis, Palestinians, Americans, Europeans” hold. Among his pronouncements:

♦ “The leftists are wrong in thinking that at the stroke of one signature and one agreement, peace will reign on earth.”

♦ “The rightists are wrong in believing that we can continue to control millions of citizens of a different nation and religion.”

♦ “The national-religious are wrong in basing their faith on God Almighty to save us from all evil, and are wrong in thinking that we are fulfilling a divine ownership certificate of the patrimony and that the land was promised only to us. We didn’t come to an empty land.”

♦ “The secular Israelis are wrong if they think that Zionism has come to an end. … They are also wrong in their scorn and ridicule towards anyone who is not them.”

Because of his close association with Rabin, and because of his ubiquitous writing — particularly for Yediot Achronot, and for Ynet — Haber’s opinions, and his memories of Rabin are still in demand. He usually appears at a commemoration ceremony or academic panel on the anniversary of the assassination, but says he isn’t sure what he will do on that date this year.

One question he frequently hears: Was Rabin — a career military man who had earned the reputation as Israel’s strongest advocate of a strong defensive posture; who earlier as defense minister had urged bone-breaking measures against Palestinian demonstrators; who reluctantly shook Yasir Arafat’s hand during the peace treaty signing on the White House lawn in September 1993 — a firm believer in the peace treaty with the Palestinians that Foreign Minister Shimon Peres, his left-leaning, long-time political rival, had surreptitiously brought about? Did Rabin trust Arafat?

“I don’t believe for a second that Arafat was a partner, and I’m not sure at all that Rabin believed he was,” Haber said in a 2012 interview with the Times of Israel. “But Rabin believed — and of this I am certain, because we spoke about it — that peace is made with these [unsavory] types. I cannot say that he liked him, but toward the end of his life, relations between them were good.”

“The accords brought the State of Israel a considerable benefit, Haber said in the Times of Israel interview. “Dozens of countries … recognized the State of Israel. The prime minister traveled, for the very first time, to various Arab states, to Oman for example, to Indonesia, to Morocco and a few other countries.” Israel’s leader “had not, until then, ever been to Russia, or China, Japan, Korea. All of those countries opened up to us.”

But Olso hasn’t brought a full peace to the Middle East.

“They didn’t bring peace,” Haber told the Times of Israel, “because, I think, it became clear to everyone … that the problems are much deeper and harder and wider than it was possible to imagine. You need years, even decades, of education” to eliminate the deep-set hostility.”

Since Rabin’s assassination, Kings of Israel Square has been renamed for Rabin, and the bloodstained sheet from which Haber read at Rabin’s funeral is in the National Archives. “I gave it to them,” he says matter-of-factly.

Haber says he is still in touch with many of the people, Israelis and Palestinians, who were a major part of his life 20 years ago.

His memory of Rabin, an Army man and reluctant politician, remains unchanged, Haber says. “Rabin believed in the army. He believed in the State of Israel. He was a soldier of peace. He understood the price of war.”