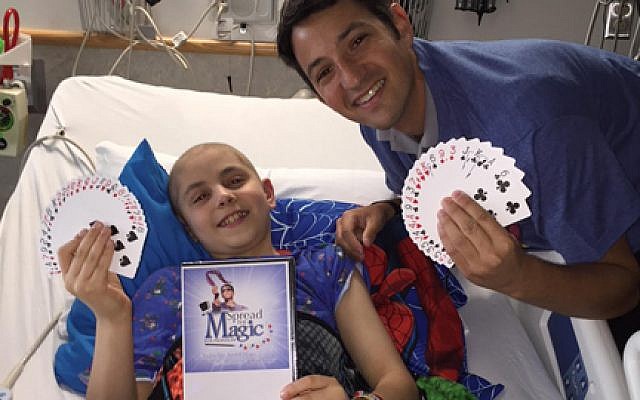 For two years of his childhood in southern New Jersey, Chad Juros’ home away from home was a cancer ward of the famed Children’s Hospital of Philadelphia (CHOP). Juros, who had not yet entered kindergarten, was battling ALL, a virulent form of leukemia, which was diagnosed when he was 3, then returned, after a brief remission, when he was 7.

Cancer-free since 1999, Juros, now 30, a resident of Galloway, N.J., returns frequently to CHOP, and other hospitals around the country to perform card tricks, levitate children and make boom boxes disappear.

A professional magician who started learning that art when he was hospitalized, he spends much of his time lifting the spirits of children — and their families — who are going through the medical traumas he endured more than two decades ago.

That’s why he showed up three years ago at the CHOP bedside of Carter Suozzi, of Glen Cove, L.I., who was undergoing treatment for lymphoma. It was Carter’s 10th birthday. His mother, Jane, wanted to surprise Carter, who had developed an interest in magic.

Finding Juros on Google, she called him and described her son’s condition — feverish for several days, he was becoming lethargic.

Juros said he was available.

“What time is the party?” he asked on the phone.

“You are the party,” Suozzi answered.

Juros, who is the founder of a for-profit entertainment company and a nonprofit foundation, said he would come.

How much is your fee, Suozzi asked?

Magic kit in hand, he drove to CHOP, an hour away, scrubbed his hands and walked into Carter’s room. “This is Chad. He’s a magician,” Suozzi told her son. Carter’s face lit up. For an hour, Juros entertained Carter, doing some tricks and showing the young patient how to perform them.

And Juros told his new friend his life’s story, how he also had cancer, had recovered and had become a master at prestidigitation.

“It took Carter’s breath away,” Suozzi says. “People had been telling him that he would be OK.” Ill and weak, his hair lost to chemo, Carter had a hard time believing the well-meaning purveyors of optimism.

Juros’ words sunk in, Suozzi says. “Carter was seeing hope with his very own eyes. It let him see his long-range future.” Juros “was so strong and vibrant and obviously alive.”

Now a fifth-grader at a Glen Cove middle school, his hair grown back and his energy restored, Carter is in perfect health, doing his magic tricks for his friends and family. “Three years, cancer free,” his mother says. “He is doing amazingly well. He’s strong, he looks great.”

Last year Carter organized a paper-airplane-throwing fundraiser at his school for Juros’ foundation, which donates much of the funds it receives to cancer research at CHOP. The Suozzis hoped to raise $1,000; with the whole family lending a hand, they brought in more than $8,000. To thank the school, Juros put on a magic show; Carter served as his assistant.

Juros says he has done his magic for “maybe 100,000” kids, in hospitals and families’ homes and other venues, because of a deathbed promise to his father.

Juros’ father, Donald, a dentist and local tennis champion, was diagnosed with a malignant brain tumor in 1998, a few months after Juros was pronounced free of his cancer. Fifteen months later, at 41, his father was gone.

Aware of his terminal prognosis, Dr. Juros had two requests. He wanted to see his son’s bar mitzvah. The rabbi of the family’s congregation gave permission for Juros — who a decade later served as his Hillel chapter’s president in college — to mark his bar mitzvah at 11, two years earlier than usual.

As his second request, Dr. Juros, who had entertained his son in the hospital with self-taught magic to take Chad’s mind off his illness and debilitating medical treatments, asked his son to continue to “spread the magic,” to do for other children what Dr. Juros had done for Chad.

The Spread the Magic Foundation (spreadthemagic.org) was born.

Juros, who as a tween reversed roles with his father, performing magic tricks for Dr. Juros in his final months, formed the nonprofit to bring hope and smiles to kids in hospital wards and JCCs, schools and summer camps, White House events and Ronald McDonald House programs.

Juros donates his times, performing around the U.S. and Canada, and Aruba.

In recognition of his work, he’s received awards from several medical organizations and an SUV from ABC-TV’s “Good Morning America.”

Many such altruistic volunteers do magic for sick children, but Juros, an in-demand motivational speaker, says he is, as far as he knows, the only cancer survivor who does it full-time.

Thin, casually dressed, toting a deck of cards wherever he goes, Juros packs his shows with traditional close-up magic, coins and sponge balls, juggling and schmoozing and joking. He’s part of a growing trend that uses humor as a weapon against the worst medical diagnoses.

Following the lead of the late Norman Cousins, whose book “Anatomy of an Illness” described how a regimen of humor helped him overcome a severe disease of the connective tissue, the psychoneuroimmunology (PNI) movement has shown the place of respectful humor in dealing with a wide range of diseases and physical conditions. Repeated studies have shown the therapeutic value of PNI; while humor does not necessarily affect a person’s symptoms, it plays a major role, often as a form of distraction, in improving someone’s attitude, morale and state of health.

That, says Carter’s mother, is exactly what Juros does. “He takes children like Carter, a terrifying reflection of him as a child, and lifts them up.”

Is it hard to go to pediatric cancer wards, especially CHOP’s, and see boys and girls who are emaciated, tired, scared, like Juros — who was given a 5 percent chance of surviving after one surgery — once was?

No, he says.  Since his earliest memories are of being in a hospital, it’s familiar turf. “That’s all I knew as a kid. I feel at home.”

Is he always “on,” always in the good spirits he brings to his shows?

No, he says again — he is subject to normal mood swings. “I’m really a quiet person.”

But, he says, he keeps his eyes on the prize — making the kids forget, for even a few minutes, what they’re going through. His payment, he says, comes in smiles.

“I believe that my purpose for survival is to pass on the lessons that I have learned from these obstacles.”

Juros, who keeps in touch with Carter, says his goal is every magician’s dream — a permanent location, maybe a theater in New Jersey, where he can base his magic, where people can come to him instead of him traveling all the time.

And Carter, when he returns to CHOP for his checkups, often entertains young cancer patients with magic tricks.

“He is spreading the magic,” Carter’s mother says.