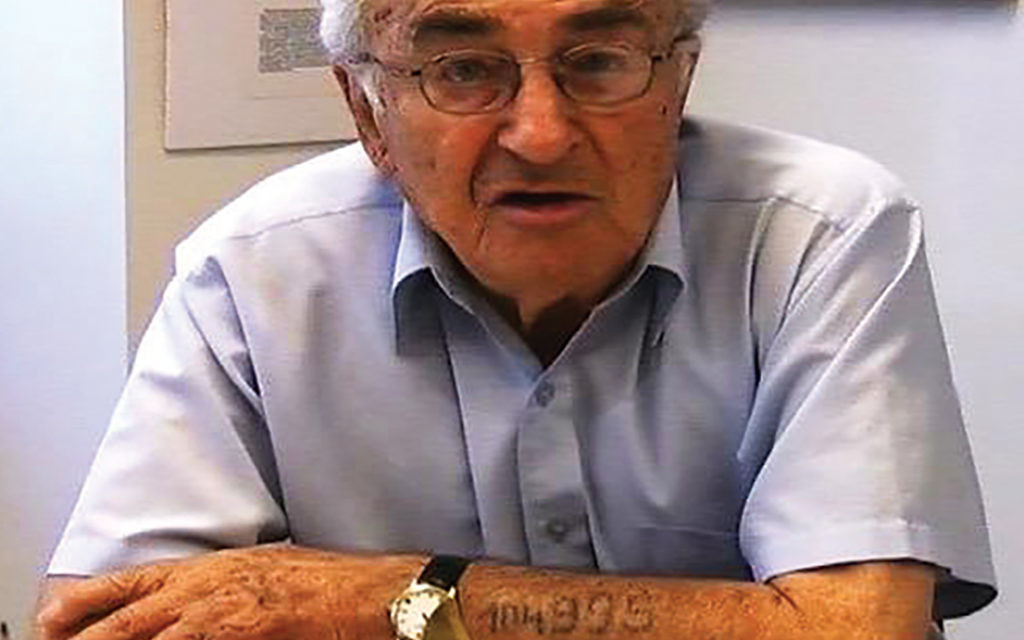 During the early months of the Nuremberg Trials, the Allied tribunal that prosecuted the top Nazi officials accused of complicity in war crimes, the reading material for the imprisoned Nazis was limited to one newspaper.

Its coverage of the trials bore an unusual byline: “Ernst Michel, Auschwitz survivor 104995.”

The native of Germany was sent to a series of concentration camps from the age of 16, escaping from a death march six years later, in the final days of the war.

He wrote stories for a new news service, DANA, and his brief journalistic experience led to a reporting job on a small Michigan newspaper when he came to the United States a year later, then to speech making around the country about his life as a Holocaust survivor, then to a job on the staff of the United Jewish Appeal, and to a long career with New York City’s merged UJA-Federation of Jewish Philanthropies.

Mr. Michel, who died May 7 from complications of dementia at 92 in his Manhattan home, once explained that he chose the unique byline because he wanted the leaders of the Third Reich “to know I was in Nuremberg reporting for the German newspaper.”

“It was very, very difficult. But I did it,” Mr. Michel said. He would call his coverage of the trials, which inspired his commitment to preserving memory of the Shoah, the “single most important” event in his life.

He was best known in some circles for organizing the 1981 World Gathering of Jewish Holocaust Survivors, a “celebration of life” that brought to Israel some 6,000 aging men and women who had lived through the Final Solution. Other people knew Mr. Michel for his extensive collection of autographs of prominent Jews.

His vocation and avocation overlapped — serving as a living witness, and helping the Jewish community in this country and overseas. “I am so lucky,” he said in an interview with The Jewish Week three years ago. “There are so few of us left. I feel it is my duty.”

Mr. Michel, who would often say that his survival was “random,” would add, “I was told I was saved for a reason.”

While Mr. Michel was motivated by the past, he did not dwell on it, his widow, Amy Goldberg, said. She told of a trip she and Mr. Michel took five years ago to Abamo, Italy, to spend several days with Mr. Michel’s younger sister, Lotte Rein, who had been hidden by nuns in France during the Holocaust. Rein lives in Israel; brother and sister had not seen each other for several years.

They did not discuss the war years, besides sharing reminiscences of their parents, Ms. Goldberg said. Mainly, “they recognized the miracle that they were both alive.”

“He was a heroic figure. He modeled the transformation from pain and death to hope and life,” said John Ruskay, executive vice president and CEO emeritus of UJA-Federation. “He was a remarkable human being, who saw death so closely and personally and was able to emerge to hold up the flame of rebirth and renewal.”

Stephen Solender, who also holds the emeritus title at UJA-Federation, said Mr. Michel influenced many “future leaders” of UJA-Federation and of Jewish federations across the U.S. “He was a motivator. He was a role model,” whose “integrity” and “very warm personality” smoothed the way for the merger of UJA and the Federation of Jewish Philanthropies, many of whose leaders were “not yet comfortable working together.”

In 2013, prior to a performance of “Defiant Requiem: Verdi at Terezin,” Mr. Michel was honored with a reception at Lincoln Center. The occasion marked his help in founding in 2000 a program that provides aid for Holocaust survivors living in New York.

A native of Mannheim, Germany, son of a cigarette manufacturer, Mr. Michel was expelled from school at 13, in 1936, because he was Jewish. He worked for a while at a cardboard packaging factory, but after Kristallnacht in November 1938, he, as a Jew, could not find employment. When World War II broke out in September 1939, he was deported to a series of work camps and death camps, including Dachau, Buchenwald and Auschwitz. His parents died in the Holocaust.

While working in an Auschwitz factory that made synthetic rubber, Mr. Michel was hit over the head by a member of the SS, an attack that serendipitously saved his life. The wound started to fester; in a camp hospital an inmate asked if anyone had good handwriting. Mr. Michel, who earlier had studied calligraphy on his father’s recommendation, raised his hand.

He was put to work filling out death certificates — always “heart failure” or “physical weakness … you could not say ‘gas chamber,’” he later recalled.

Because of his penmanship skill, “You won’t be sent up the chimney,” the inmate, a non-Jewish communist, assured Mr. Michel.

The 1981 Gathering, on the 36th anniversary of the death camps’ liberation, grew out conversations he had with fellow prisoners in Auschwitz, and subsequently with members of Netzer Sereni, a kibbutz founded by Buchenwald survivors. “We encouraged each other not to give up hope,” he said. “We made a promise that we would tell the story. I had a dream that someday we would all be able to come together as one and say to Jews and non-Jews all over the world that what happened to us must never happen again.”

After liberation in 1945, Mr. Michel found work as an interpreter for the U.S. military government in his hometown. A captain Picard told him of a need “for individuals who are not Nazis” to work for the DANA news service. “I accepted the job.”

Mr. Michel was 22 when he arrived in Nuremberg as a reporter. “I had no training. I had no money. I had no family,” he would remember. He sat in the press gallery along such prominent journalists as Edward R. Murrow and Walter Cronkite. “They interviewed me. They couldn’t understand how a survivor was sitting here as a reporter. I had to pinch myself.

“I was not just a newsman; I was also a survivor,” Mr. Michel would say. Ex-Nazi officials like Hermann Goering and Rudolf Hess sat a few yards from him. “There were times when I wanted nothing more than to jump up and grab them by the throat.”

Mr. Michel went to Goering’s cell. “Goering smiled, came up to me and wanted to shake my hand.

“At that moment I suddenly froze,” Mr. Michel said in an interview decades later. “I couldn’t move. I looked at his hand, his face, and then his hand again — and then I just turned round. I couldn’t do it. I just couldn’t speak to this man. Not one single word.”