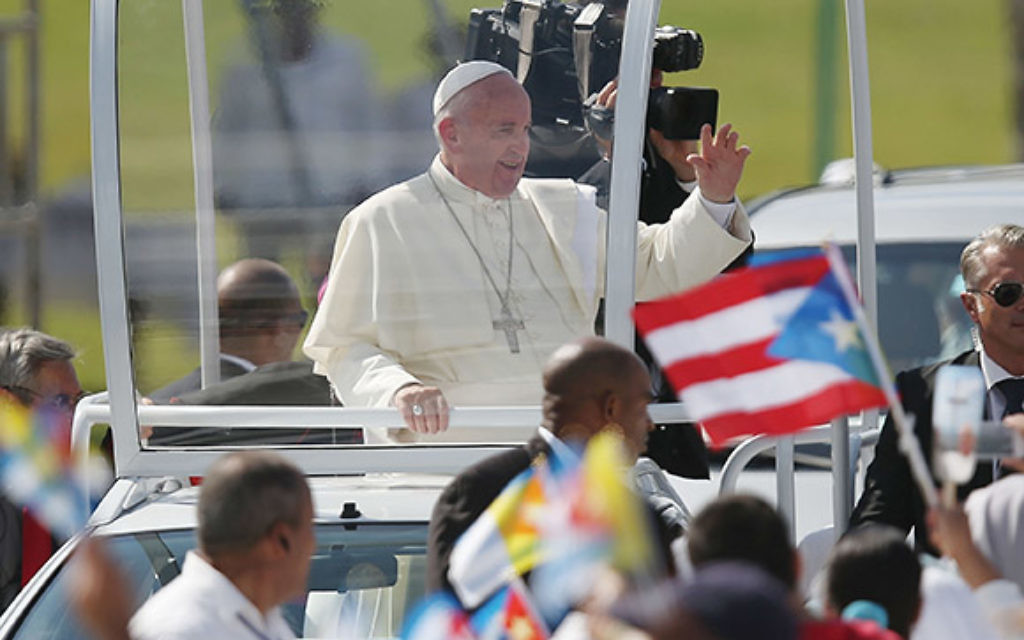 A month before the 50th anniversary of the Vatican document that reversed two millennia of Catholic enmity towards the Jewish people, Pope Francis on Friday will lead an event here that further symbolizes the improving relationship between the two religious communities.

The high-visibility presence of the Jewish community at the gathering, which Catholic leaders are pointedly not billing as a prayer service, points to the Jewish-Catholic ties that started to become stronger after the Vatican issued Nostra Aetate in October 1965. Relations have continued to improve since Argentine-born Francis succeeded Benedict XVI as the leader of the Catholic Church in 2013, Jewish participants in interfaith activities said.

“The [Catholic] outreach to the Jewish community has been truly extraordinary,” said Rabbi Joseph Potasnik, executive vice president of the New York Board of Rabbis.

But, Jewish leaders added, the shadow of Francis’ predecessor during World War II, Pius XII, continues to color Jewish-Catholic dialogue. The Vatican’s wartime archives, which would reveal whether Pius XII turned his back on Jewish suffering during the Holocaust or used his influence to have Church institutions rescue endangered Jews, remain closed, despite decades of Jewish lobbying. And the Vatican’s process to have Pius XII declared a saint, though on the Church’s slow track, remains in place.

These topics, centered around the record and legacy of Pius XII, are one of the prominent issues in ongoing Jewish-Catholic dialogue. But they are “a small part of the Jewish-Francis relationship,” said Rabbi Noam Marans, the American Jewish Committee’s director of interreligious and intergroup activities.

“With Pope Francis we have entered a new stage: normalization,” Rabbi Marans wrote in the New York Post last week.

In an interview with The Jewish Week Monday, Rabbi Marans called Pope Francis’ relationship with the Jewish community “unprecedented.”

“He gets the Jewish people. He gets Jewish history, Jewish emotions. He gets it instinctually,” he said.

Other issues on the Jewish-Catholic dialogue agenda include opposition to the increasing anti-Semitism in Europe, support for embattled Christians in the Middle East and a joint opposition to religious extremism and terrorism, he and other Jewish leaders said.

“Francis’ visit will be a missed opportunity … if America’s leaders and many presidential aspirants don’t push to resolve a long-standing impasse between the United States and the Vatican over the church’s steadfast refusal to open all its Holocaust archives,” Gerald Posner, author of “God’s Bankers: A History of Money and Power at the Vatican,” wrote in The Washington Post last week.

According to “the Vatican’s arcane, unwritten archival rules,” Posner wrote, “the church traditionally released the files of the pope 75 years after the start of a papacy. March 2, 2014, marked that date for Pius XII.”

Pope Francis has given signs that the archives’ opening, while not imminent, is in process. He wrote, while serving in Argentina, that the archives should be opened “so the truth can come out,” Rabbi Marans said, adding that it’s his understanding that the process of opening the archives “is underway.”

Rabbi Abraham Skorka, a longtime friend of the then-Archbishop Jorge Mario Bergoglio in Buenos Aires, said during a visit with the Pope to Israel last year that he has a standing promise that the archives will be opened. And on his return from Israel, Francis told reporters that the canonization process of Pius XII “has stalled.”

Francis, in an interview later last year with the Israeli newspaper Yediot Ahronot, said that while a 1929 agreement between the Vatican and Italy bars opening the archives, enough time has passed that he “see[s] no problem with opening the archives the moment we sort out the legal and bureaucratic matters.”

Mark Weitzman, director of government affairs at the Simon Wiesenthal Center, said Vatican representatives have started to attend, in a capacity as witness, meetings of the International Holocaust Remembrance Alliance, a 31-nation organization that urges all countries to open their wartime archives. The Vatican’s presence at the meetings is a tacit, optimistic sign that the Church may be more amenable to changing its own closed-door policy, Weitzman said.

“The conversations with the Vatican on this topic have been much warmer” than in earlier years, he said.

The Jewish representatives expected at Friday’s gathering at the 9/11 Museum who spoke to The Jewish Week said they will not have the opportunity to discuss the archives with the Pope then, and Rabbi Cosgrove said he will not mention the archives during his invocation, which will be dedicated to the memory of the 9/11 victims. But he called his invitation to give an invocation, “wonderful progress” in Catholicism’s attitude towards the Jewish faith.

The archives issue may be raised by Jewish participants at a Nostra Aetate anniversary conference at the Vatican in October, Rabbi Marans said.

Throughout the year, discussions on this topic take place between representatives of the Jewish community and Catholic leaders in Rome and overseas, the rabbi said. And the archives issue may be raised next spring during the next meeting of the International Jewish Committee on Interreligious Consultations, the Jewish community umbrella for interfaith discussions.

“We raise this every time there is an official meeting,” said Rabbi David Fox Sandmel, the Anti-Defamation League’s director of interfaith affairs. “The people at the Vatican who deal with the Jewish community are well aware of this concern.”