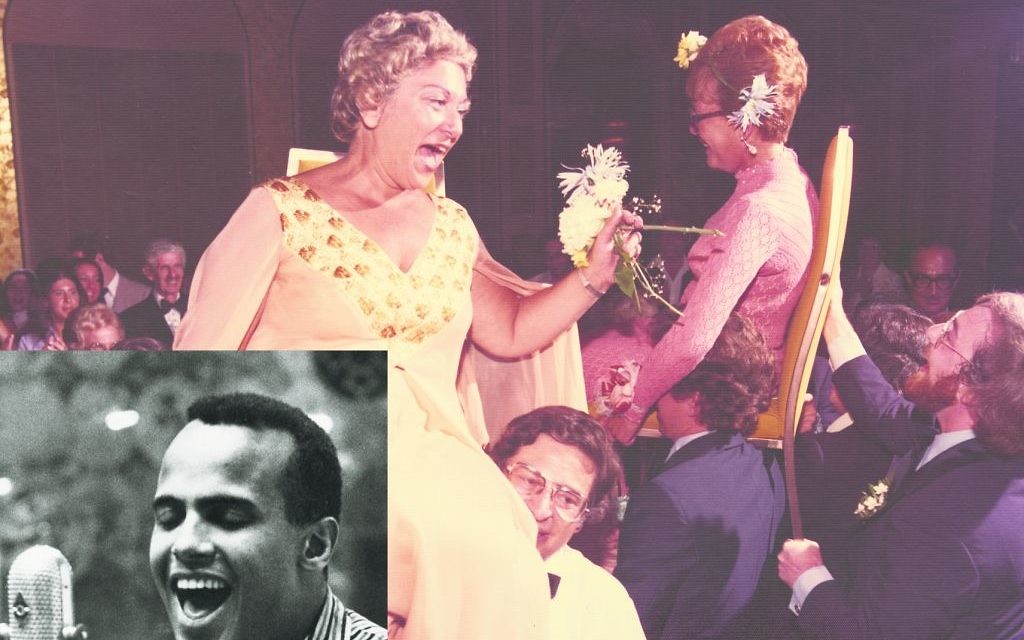 The beauty of downtown’s Museum of Jewish Heritage is that it is of a piece. To get to its newest exhibit, “Hava Nagila: A Song of the People,” wander through other rooms: Ukrainian shtetl life, old Kiddush cups and white kittle gowns; photos from a Displaced Persons camp; escape to the Yishuv (the Jewish community in pre-state Israel). Wander, then, into the “Hava Nagila” room and the song is understood with a poignancy long ago lost.

After all, “Hava Nagila” (“Let Us Rejoice”) was not born in raucous catering halls but in the 1800s, in Sadigura, a Ukrainian chasidic shtetl, as a wordless meditative melody. Words and a hora were added in the Yishuv, and it was danced to in the DP camps, an expression of hope and energy in a world that seemed to have neither. Refugees and Zionists brought it to the United States, and “Hava Nagila” soared to popularity in mid-century, only to leave home, lost to parody, kitsch and cliché.

Here, though, a visitor suddenly hears the old song in a new way. That’s what a good Jewish museum can do; it can make you cry for “Hava Nagila.”

Curator Melissa Martens says the exhibit is of a piece with “Hava Nagila: The Movie,” a new documentary by Roberta Grossman and Sophie Sartain. The consensus by the new explorers of “Hava Nagila” is delight in how the tune has gone global, and we’re shown on video screens how the song was adopted by folkies, the Muppets; the Civil Rights movement, samba bands in Latin America, and a bluegrass Christian Zionist group in Texas; how it became a rallying organ riff at a Mets game, and how it became popular in Iran and Japan. “It’s ubiquitous, it’s everywhere,” says Grossman. “Everyone knows it, from Afghanistan to Argentina.” And that’s precisely the problem.

As soon as the exhibit tells us (and fairly quickly — it’s not a large exhibit) that the song became a pop sensation in the 1950s and early 1960s when it was recorded by Harry Belafonte, the Barry Sisters, Connie Francis, and re-written by Lena Horne (one of many versions in which English lyrics were added that had nothing to do with the Hebrew), and covered by many, the song seems to slip away from itself.

There is still a Sadigura community in Brooklyn. Does contemporary Sadigura play “Hava Nagila” at their own weddings? After telling us that the song was composed in Sadigura, the exhibit doesn’t tell us one word about how its journey is regarded by those whose song it was in the first place.

Ezra Friedlander, son of the Liska Rebbe and CEO of the Friedlander Group, a public relations firm, says Sadigura and several related dynasties, such as Boyaner, are still a “substantial” presence in New York and Israel. He says that the Skverer chasidim (in New Square, N.Y.) sing the slower version of the original Ukrainian nigun on Simchat Torah, when the dancing meets the dawn.

Rabbi Haskel Lookstein, spiritual leader of Kehilath Jeshurun since 1958, remembered a time, he told us by phone, when “Hava Nagila” “was first a Zionist song, like ‘Artza Alinu.’ These were the real Zionist songs.”

Matthew Lazar, director of the Zamir Chorale, the pre-eminent Jewish choral group that often performed Hava Nagila in the 1960s and ’70s, adds that well into mid-century, “‘Hava Nagila,’ like ‘Tzena Tzena,’ still evoked the new Jewish state. There was a time when anyone who heard ‘Hava Nagila’ immediately thought of Israel and folk dancing.”

But the more it became ubiquitous, a universal pop song like the Macarena, more about sound than substance, the more it couldn’t help but seem less Jewish, says Rabbi Lookstein.

A niggun is eternal. A pop song is ephemeral.

The exhibit admits, “The tune’s widespread familiarity made it a likelihood for stereotypes, insider winks, and punchlines.” Was familiarity the problem? Almost all Jews are familiar with the old Friday night table song, “Shalom Aleichem,” but that song was never the victim of parodies and punchlines.

By the 1960s, it was liberal Jews, as much as anyone, who sensed that “Hava Nagila” was becoming unmoored from its truest self. The first devastating take-downs, the exhibit shows us, came in 1963, with Bob Dylan’s “Talkin’ Hava Nagila Blues,” and comedian Allan Sherman’s parody, “Harvey and Sheila.” Dylan’s satire upended the trend in folk music to perform exotic, ethnic songs. “Here’s a foreign song I learnt in Utah,” Dylan begins, and then Dylan mock-struggles through the Hebrew pronunciation before breaking into a yodel. And Sherman always got big laughs when singing about Harvey and Sheila, a materialistic, conformist couple with nothing Jewish about them but the melody of “Hava Nagila.”

What the exhibit leaves out is the considerable evidence that Dylan took “Hava Nagila” seriously; he wasn’t mocking “Hava Nagila” but the kitsch it had become. A few years ago, in one of his extremely rare television performances, Dylan returned the song to the chasidim, playing a straight version of “Hava Nagila” on a Chabad telethon, while wearing a yarmulke and playing his harmonica, alongside son-in-law Peter Himmelman and actor-musician Harry Dean Stanton on guitars and vocals. Unlike Danny Kaye, who on his 1960s variety show introduced “Hava Nagila” (as so many did) without saying it was Jewish or even in Hebrew, let alone what it meant, before Dylan did “Hava Nagila,” a Chabad rabbi was asked to explain the song’s meaning. The rabbi’s take: “Let’s be happy because God is good to his children.”

“Hava Nagila” was in a constant state of evolution and changing ownership almost from the minute it left Sadigura. The Zionist musicologist, Abraham Z. Idelsohn, around 1915, heard the niggun from Sadigura immigrants in Jerusalem. It was Idelsohn who wrote the famous Hebrew lyrics, loosely based on Psalm 118. The exhibit offers a clip of the very first recording, in 1922, by a male choir doing a surprisingly slower, more reflective version, in all likelihood closer to the shtetl original. However, on the sheet music, Idelsohn writes that “Hava Nagila” is best played “Allegro Vivace,” fast and lively.

By the late 1920s, as group circle dances were becoming synonymous with the Yishuv’s exuberance and physicality, “Hava Nagila” became twinned with the hora dance, itself an “immigrant” from Eastern Europe. It was the perfect marriage, the hora being as caffeinated as Idelsohn’s jazzed-up niggun.

We see, in the exhibition’s photos and videos that it was danced in front of the Jewish Palestine Pavilion at the 1939 World’s Fair; in a 1948 DP camp in Germany; in 2011, at Congregation B’nai Jeshurun on the Upper West Side, to celebrate same-sex marriage; and at the 2012 Olympics, when gymnast Aly Raisman won her gold medal on floor exercise to the accompaniment of “Hava Nagila.”

When there were fewer songs in the wedding repertoire, the first dance set at weddings “would last 20 minutes, and that seemed long,” Rabbi Lookstein recalled. “‘Hava Nagila’ used to be the first dance. But then,” roughly in the 1970s, “the repertoire expanded. [Shlomo] Carlebach, and the chasidic and neo-chasidic music revival became very popular, and the in-crowd started to use that. The first round of dancing could go for an hour.” The more that Jewish musical savants demanded the new songs and the new dances, the more “Hava Nagila” became a wallflower where it once was king. It had grown old.

One of the sorrows of growing old is the loss of memory, not only your own memory but also the loss of people whose memory included you when you were young. Who remembers “Hava Nagila” before it was kitsch, when it was a spiritual niggun in a shtetl, and carried to Jerusalem, a thrilling Zionist song that young people were happy to sing and dance to in the open fields, a song that was about rebirth and tomorrow? How did we get from there to here?

Like Carl Sandburg’s “Harvest Moon,” this exhibit “comes and touches you with a thousand memories,” asking the “beautiful, unanswerable questions.”

“Hava Nagila: A Song of the People” will be on view through spring 2013 in the Rotunda Gallery of the Museum of Jewish Heritage, 36 Battery Pl. For more information see the exhibition website, www.mjhnyc.org/hava.