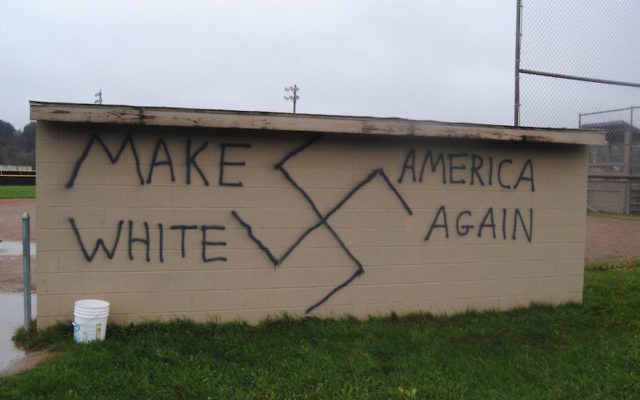 Nazi-themed graffiti was found in the town of Wellsville, N.Y., the same day that Donald Trump won the presidential election, Nov. 9, 2016. Twitter

(JTA) — Hate crimes against Jews in America rose by more than a third last year and accounted for 58 percent of all religion-based hate crimes, according to data released Tuesday by the FBI.

Overall, hate crimes increased by 17 percent in 2017, the data showed. with 7,175 hate crimes reported, up from 6,121 in 2016. Some of the increase may be because more police departments are reporting their hate crimes data to the FBI than ever before, 6 percent above the previous year.

The number of hate crimes based on religion is the second highest ever, behind only 2001 in the wake of the 9/11 attacks. The report noted a 23 percent increase in religion-based hate crimes in 2017 to 1,564, representing about 20 percent of all hate crimes.

In addition, some 58 percent of all hate crimes in 2017 were based on race, including 28 percent against African-Americans. There was also a 5 percent rise in crimes directed against LGBT individuals, to 1,130 in 2017 from 1,076 the previous year.

More than 4,000 crimes in 2017 were against people, including threats, intimidation, assault and murder. More than 3,000 were crimes against property, such as vandalism, robbery, and arson.

The report covered jurisdictions in 49 states and the District of Columbia, the FBI said. At least 92 cities with populations of more than 100,000 either did not report any data to the FBI or reported zero hate crimes.

In 1990, Congress passed the Hate Crime Statistics Act, which required the U.S. attorney general to collect data “about crimes that manifest evidence of prejudice based on race, religion, sexual orientation, or ethnicity.” 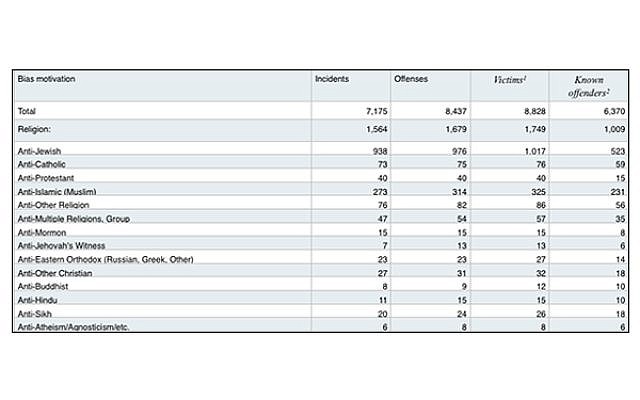 The Anti-Defamation League’s annual Audit of Anti-Semitic Incidents for 2017, which includes both criminal and non-criminal acts, found that anti-Semitic incidents rose 57 percent in 2017, the largest single year increase on record and the second highest reported since ADL started to keep track in 1979.

“Two weeks ago, we witnessed the most deadly anti-Semitic hate crime in American history,” ADL National Director Jonathan Greenblatt said in a statement, referring to the shooting at a Pittsburgh synagogue that left 11 worshippers dead. “Today, we have another FBI study showing a big jump in hate crimes against Americans because of their race, religion, ethnicity, and sexual orientation.

“This report provides further evidence that more must be done to address the divisive climate of hate in America. That begins with leaders from all walks of life and from all sectors of society forcefully condemning anti-Semitism, bigotry, and hate whenever it occurs.”