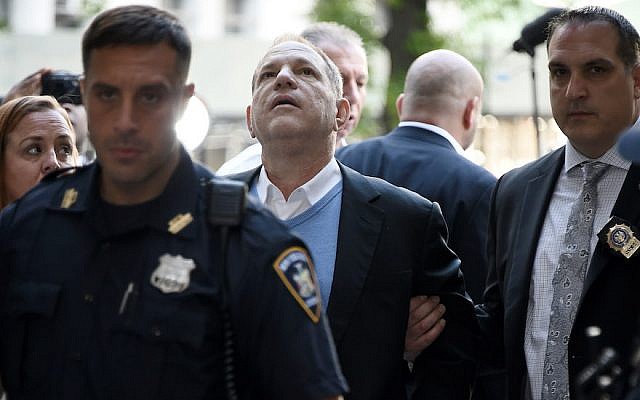 Harvey Weinstein arriving for his arraignment at a New York City courthouse in handcuffs, May 25, 2018. (JTA)

Movie mogul Harvey Weinstein has been accused of harassment and sexual assault of a teen-age Polish model.

The unnamed woman filed a lawsuit in civil court in New York on Wednesday.

The lawsuit alleges that Weinstein assaulted her at his New York City apartment in 2002, after they met at an event in which her modeling agency was involved. It says that Weinstein forced her to touch his penis, and aggressively demanded that she have sex with him or that she would never work as an actress. The lawsuit says the teen was a virgin and did not give in to Weinstein’s demands.

The lawsuit alleges that following the alleged assault, Weinstein called or texted the model every couple of weeks reminding her that he could prevent her from getting work as an actress. Weinstein “ensured she never received work,” the lawsuit alleges.

She is the tenth victim to join a class action lawsuit against Weinstein.

The accusations against Weinstein follows the publication by the New Yorker a year ago of accounts by several women from the movie industry who said he had forced himself on them and others for decades with the silent knowledge of many in the film industry and beyond.