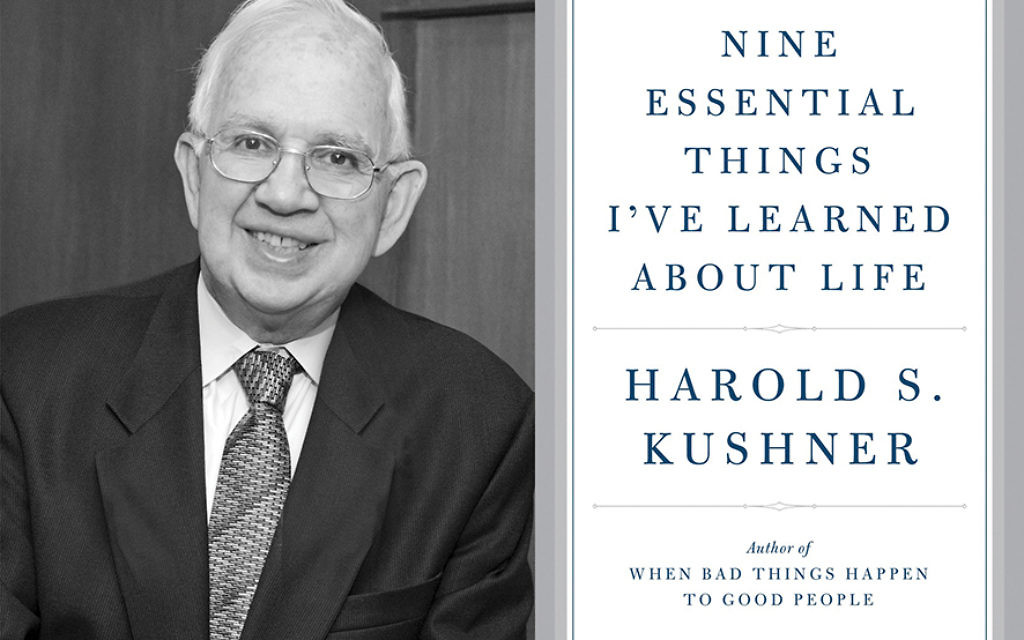 It feels natural to begin a conversation with Rabbi Harold Kushner by talking about God, even as we’re seated in a crowded hotel lobby on a weekday afternoon.

The author of the international mega-best-seller “When Bad Things Happen to Good People” and a dozen other books on faith has spent much of his 55 years in the rabbinate trying to give people a different idea of God than the all-powerful and all-knowing bearded man in the sky. But, he admits, crediting Maimonides for the idea, even if we decide God is not a being, our human imagination is so limited, we can only conceive of God as a being. For this Conservative rabbi, the best question isn’t, “Where’s God?” but, “When is God?” The second question urges readers to look for God not in places but in moments.

In fact, his favorite line in his new book, “Nine Essential Things I’ve Learned About Life” (Knopf), is his recounting of his response to a CNN interviewer, after an experiment showed that being prayed for doesn’t help sick people heal. “It isn’t God’s job to make sick people healthy. That’s the doctor’s job. God’s job is to make sick people brave, and in my experience, that’s something God does really well.”

This new book is a distillation of all that Rabbi Kushner has learned in his rabbinate. When asked “Why nine?” he said he didn’t want to call it “Ten Things,” as that sounds too formulaic. What all nine have in common, he explains, is that they are informed by an approach to Judaism that reaches people by adding depth and meaning to their lives, as opposed to the theology of “command and obey” that he grew up with and then followed during his early years in the rabbinate.

In person, Rabbi Kushner speaks in a voice that is gentle yet assured, and he readily quotes sources. This is the most personal of his books, and the most autobiographical: He grew up in Brooklyn; his family was “observant but not compulsive,” and there was “an absence of a belief of a God who would punish us for disobedience” — which became two cornerstones of his religious life. While a student at Columbia University in the 1950s, he began taking classes at JTS, and after graduation enrolled in rabbinical school, heavily influenced by Rabbi Mordecai Kaplan. He was ordained in 1960 at age 25. After two years as an army chaplain, he worked as an assistant rabbi in a Great Neck Conservative synagogue and in 1966, took on the pulpit of Temple Israel in Natick, just outside of Boston, where he is now rabbi laureate.

This wasn’t the rabbinic path he anticipated. As someone who delights in public speaking, he assumed he would eventually move to a large synagogue, but his situation changed when his son Aaron was diagnosed with and died of a rare disease, progeria, that rapidly aged him. He stayed in Natick and began writing books.

He ends the new book with a new question: Can we trust the world? Is ours a world in which people can count on getting what they deserve? Refusing to say no, he instead says, “Not yet.”

Writers may take inspiration from a habit Rabbi Kushner shares: As he sits down to write, he makes out a check to a charity, doing an act of kindness as preparation for the challenge of being creative, so that a perspective of generosity might flavor his writing.