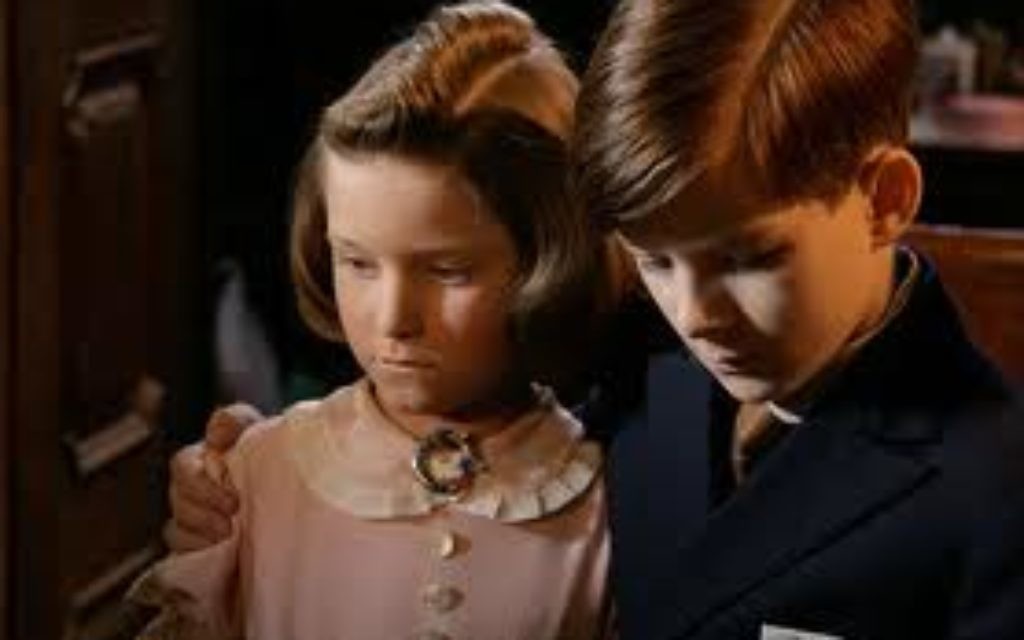 It’s an unprepossessing object, a battered, rather ordinary valise, with a name, date of birth and the German word “Waisenkind” (orphan) painted in broad strokes on its side. But the most neutral objects acquire meaning through association with people and events, and this particular suitcase carries a lot of history along with its meager contents.

The story of that suitcase has been told in a children’s book, and now in a documentary film by Canadian filmmaker Larry Weinstein, both titled “Inside Hana’s Suitcase,” which opens Wednesday, April 18. It’s a story at once both simple and complicated, spanning three continents and linking Toronto, Tokyo and Terezin.

Hana Brady and her brother George were the children of a comfortable middle-class Jewish family in Czechoslovakia between the World Wars. George was eleven and Hana almost eight when the Nazis invaded the country and instituted draconian anti-Jewish laws. Eventually their mother and then their father would be arrested by the Gestapo, leaving the children to fend for themselves until a non-Jewish uncle took them. Eventually, they would be transported to Terezin and finally to Auschwitz. There, Hana would be murdered, leaving only the suitcase as a slender legacy.

Years later Fumiko Ishioka, the young director of the Tokyo Holocaust Education Center, visited Auschwitz and, deeply disturbed by the experience, asked the curators at the museum there if there were materials she could use to convey the enormity of the Shoah to Japanese children. They sent her the suitcase and the few of the objects it contained. Almost immediately, Ishioka’s youthful charges, a group of grade-schoolers called the “Small Wings,” wanted to know more about the girl their age who had owned the suitcase.

Thus, “Inside Hana’s Suitcase” has parallel narrative lines, the story of Hana and George, who survived Auschwitz and now lives in Canada, and the story of Ishioka’s attempt to learn more about the suitcase and its owner. This is the kind of double narrative that takes a fair amount of skill to pull off, and Weinstein handles the dual stories deftly, shifting between the two at just the right moment throughout the film’s 90 minutes. If he stints a little on the story of the modern-day search, it doesn’t hurt the film in any significant way.

I must confess that I have always found it difficult to know how to teach the Shoah to grade-school-age children (although, fortunately, it‘s not a question that comes up much). As Ishioka says at one point in the film, the suitcase proves to be “a good educational tool,” engaging the kids on a level to which they can relate, providing a concrete example of the insidious workings of the Nazi murder machinery and putting a face and name to one of the six million.

Weinstein underlines this point by having much of the two stories recounted in their own words by children from the three programs that have a direct tie: the Small Wings, a class from Nove Mesto, the Czech town in which the Bradys grew up, and another from Toronto, where George lives today. The youngsters are wonderfully earnest and articulate and, for the most part, Weinstein avoids playing on their undeniable cuteness.

He is equally fortunate in his choice of adult storytellers. Both George Brady and Fumiko Ishioka are the kind of narrators who can recall disturbing events with remarkable calm and dignity, and Brady brings a particular strength and focus to the film.

Brady’s centering presence grounds the proceedings in a way that some of Weinstein’s other filmmaking choices do not. There are extensive black-and-white recreations of the young Bradys stories and some clever but gratuitous animation. Undoubtedly, the director felt such devices were necessary to reach a young audience that would not be sufficiently engaged by a bunch of talking heads.

In that respect, he may well be correct. In a documentary intended for an adult audience, the considerable amount of screen time given to such footage raises both aesthetic and ethical red flags. Perhaps it can be forgiven in a film intended for a younger audience.

To that extent, like the object in its title, “Inside Hana’s Suitcase” is an admirable and suitable teaching tool.