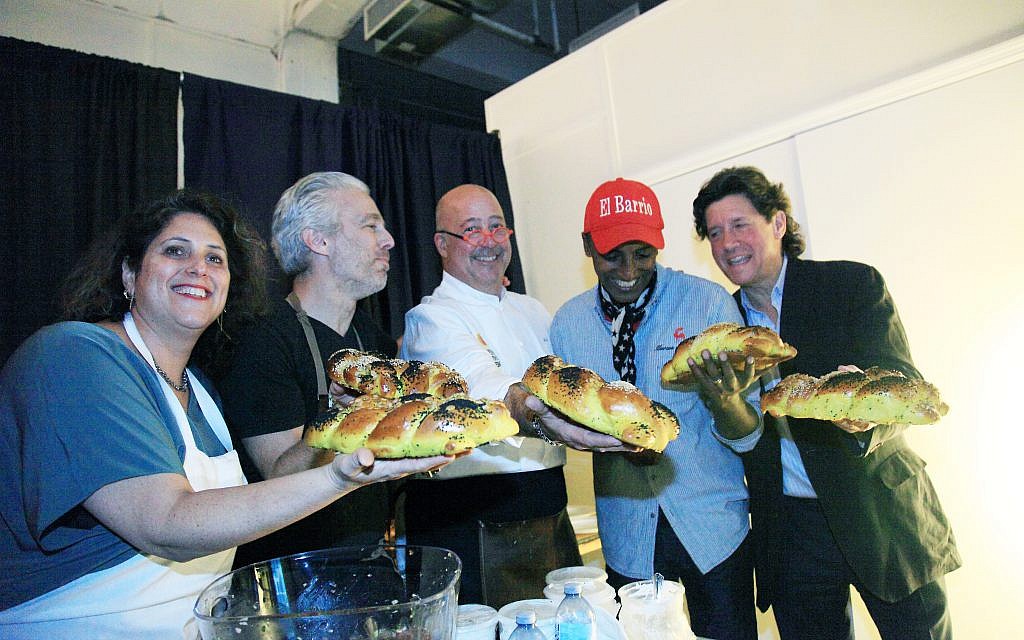 In a vivid demonstration of the growing Jewish community in Harlem, around 100 guests celebrated a shabbat dinner cooked up by celebrity chefs as part of the Harlem EatUp! food festival last Friday night.

Guests, both Jewish and non-Jewish, chowed on dishes prepared by acclaimed chefs like Marcus Samuelsson and Andrew Zimmern at the JCC Harlem.

Now in its fifth year, Harlem EatUp! is a food festival co-founded by Herb Karlitz and Samuelsson that celebrates the food, art and culture of Harlem. They teamed up with the Jewish Food Society to host the shabbat dinner — the first year the festival included a shabbat event as part of its programming.

“I think it’s safe to say this is probably the first kosher Shabbat dinner in Harlem cooked by celebrity chefs, including a non-Jewish one,” Karlitz, a culinary entrepreneur and producer of major food festivals told the guests gathered at the JCC on 118th St.

This is not his first foray into celebrating Jewish food. In January he brought a group of celebrity chefs, restauranteurs and food writers to Israel for a Birthright-style trip to get a taste of the Israeli food scene. (He also, incidentally, makes a mean chopped liver based on his mother’s recipe which he sends to top chef’s around the country. His secret? “Just when you think you have enough shmaltz — more shmaltz.”)

Andrew Zimmern is the host of “Bizarre Foods” on the Travel Channel and a four-time James Beard Award winner, most recently for Outstanding Personality/Host of the year in 2017. He said he had goose pimples when he heard the prayers before the meal. 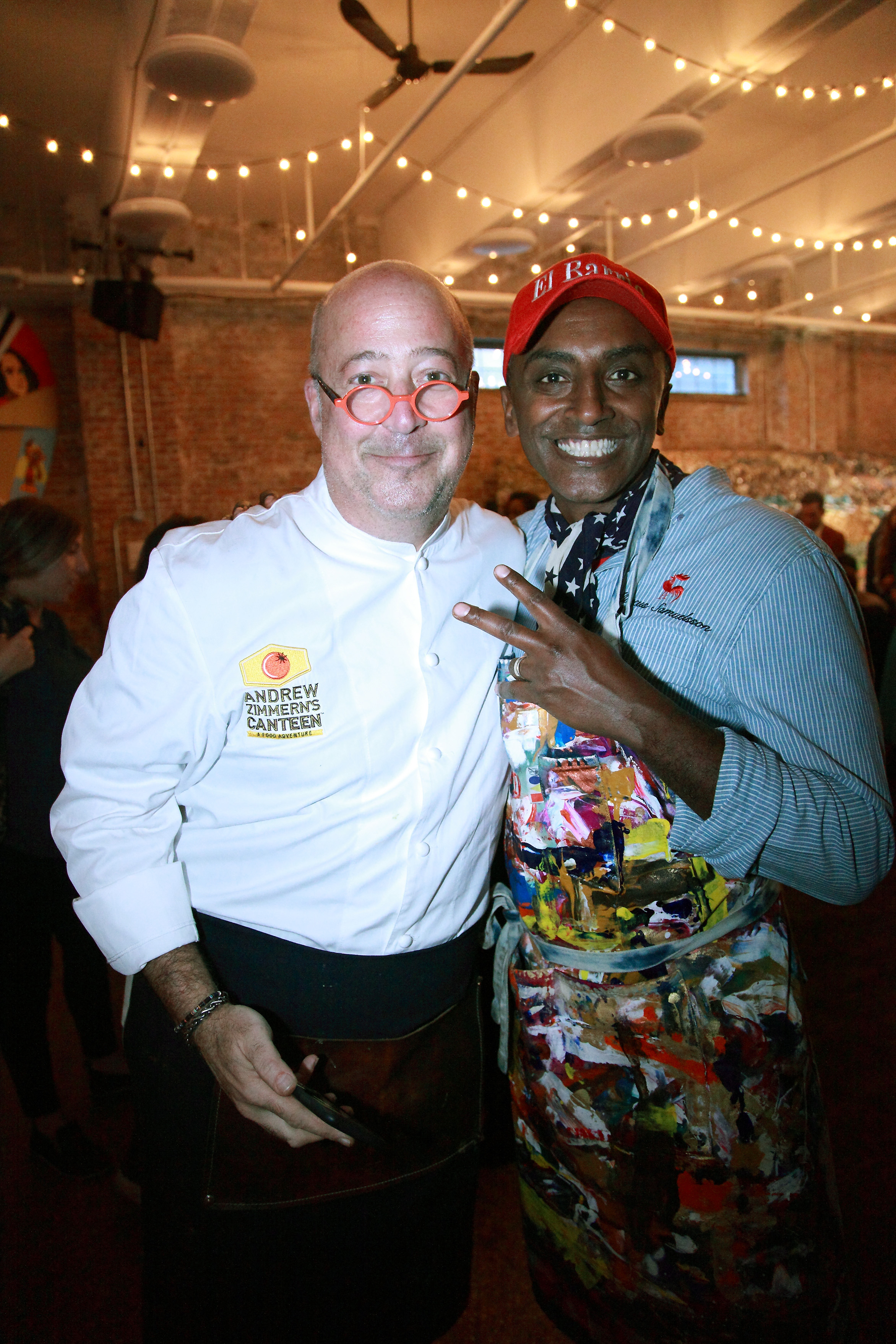 “It was one of the most moving experiences I’ve had in my food life, and I’ve been doing this for 40 years,” Zimmern told The Jewish Week.

Zimmern teared up while recalling memories of helping his grandmother make pickled cucumbers. His grandmother, Henriette, was the sisterhood president of Mount Neboa Synagogue while she was alive. The cold-poached verlasso salmon with cucumbers that he served at the dinner were an homage to her.

“I’ve been in fancier food dinners at fancy food festivals in capitals all over the world,” he told the crowd. “I’ve been in fancier JCCs… I’ve been at dinners with fancier silverware… Chairs with more padding… I’m really hard-pressed to imagine a night that is as beautiful and perfect a food event as this one.”

Samuelsson is executive chef of Red Rooster Harlem and a six-time James Beard Award Winner. He’s also the champion of Bravo’s “Top Chef Masters” and the Food Network’s “Chopped,” where is he also a judge. At the dinner he spoke of Harlem’s rich culture and history, a confluence of African-American and Jewish history (it housed the third largest Jewish community in the world in the early 20th century) and one of the active areas in the Civil Rights Movement. The inventive dish he prepared for the night: tuna pastrami with Israeli couscous, spring succotash and asparagus.

“I loved this challenge of cooking a meal that was flavorful without using a lot of heat,” Samuelsson told the guests. “We approached it with a lot of fun a lot of chutzpah and we had a great time.”

Lior Lev Servarz,  also known as the “Spice King,” prepared a tumeric challah with tahini, ginger chili eggplant, sweet potato and squash muhamara for the guests. The owner of “La Boite” in Hell’s Kitchen, which boasts more than 110 spice blends, Servarz said kosher salt is the most Jewish spice.

“It’s the only religion that was branded a spice,” he said to laughs from the guests.

Sivan Baron, owner of the Harlem restaurant Silvana, which serves Israeli cuisine said that when she first opened some critics claimed she stole Israeli salad from Arab countries. For the dinner, she prepared veggie cigars, Israeli salad and vanilla ice cream with shaved halvah for dessert.

Nisa Sedaghat, a food and travel writer from Manhattan was a participant at the meal. She said Zimmern’s dish reminded her of her roots.

“The salmon was done very well. The testament, the dedication to Zimmern’s grandmother maybe on a subconscious level made the dish taste better,” Sedaghat said. “My mother also makes a salmon dish like that so that kind of heritage resonated with me. Everything was vegetable and produce driven, which was refreshing.” 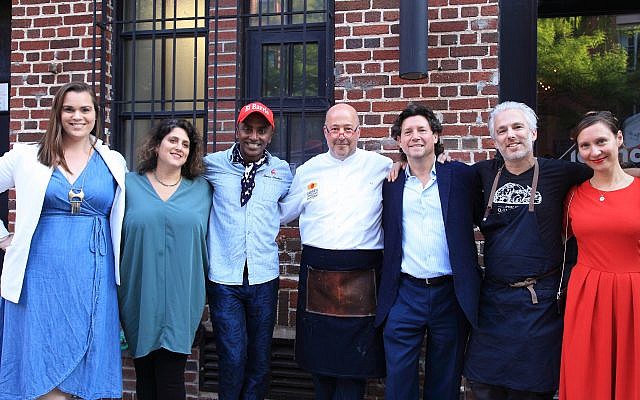 Speaking about his experience, Samuelsson told diners he was inspired.

“The idea is for all people to get together and look at our similarities through food,” Samuelsson said. “It’s humbling. I lived across the street and watched it [the JCC] come up and turn from a parking garage into something inspiring for kids. What could be better than that?”

Meg Sullivan, the director of Harlem JCC, said she was happy to partner with such skilled people.

“This was beyond my wildest dreams,” Sullivan said. “The energy in the room was so special with such incredible talent and wonderful people. We couldn’t have asked for anything more.”