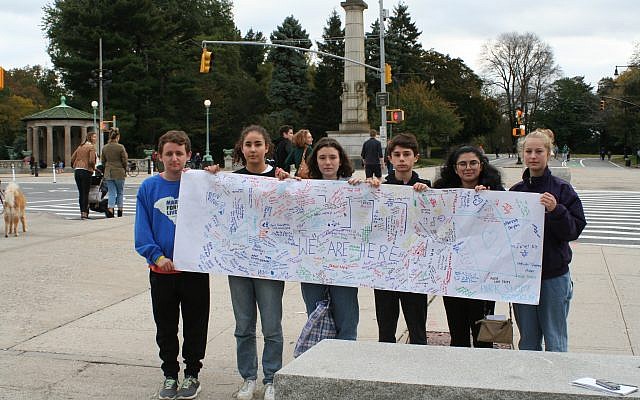 Teen activists who organized a Sunday afternoon Youth Vigil at Grand Army Plaza hold up a sign for the Pittsburgh community which reads "Hineni: We Are Here." Hannah Dreyfus/JW

Sonia Chajet Wides, 14, was on a break from co-instructing a fifth grade Hebrew school class at her local Brooklyn synagogue on Saturday morning when her iPhone buzzed persistently with a breaking-news update.

When she reached out to silence the updates, the word “synagogue” caught her eye. An active shooter had opened fire at a Conservative synagogue in Pittsburgh while Shabbat morning services were underway; the casualties — eleven people killed and six more injured — were not yet known. The gunman shouted anti-Semitic slurs before perpetrating what the Anti-Defamation League later classified as the deadliest anti-Semitic incident in American history.

“I found out about this attack while going through my own Saturday morning ritual at my synagogue,” she told The Jewish Week, describing returning to the Hebrew school classroom and attempting to finish up her lesson “like nothing was different.”

For teens growing up in today’s national climate — where shootings at schools, churches and now synagogues are no longer out of the norm — emboldened displays of hate begin to feel familiar.

But something was different. For teens growing up in today’s national climate — where shootings at schools, churches and now synagogues are no longer out of the norm — emboldened displays of hate begin to feel familiar. 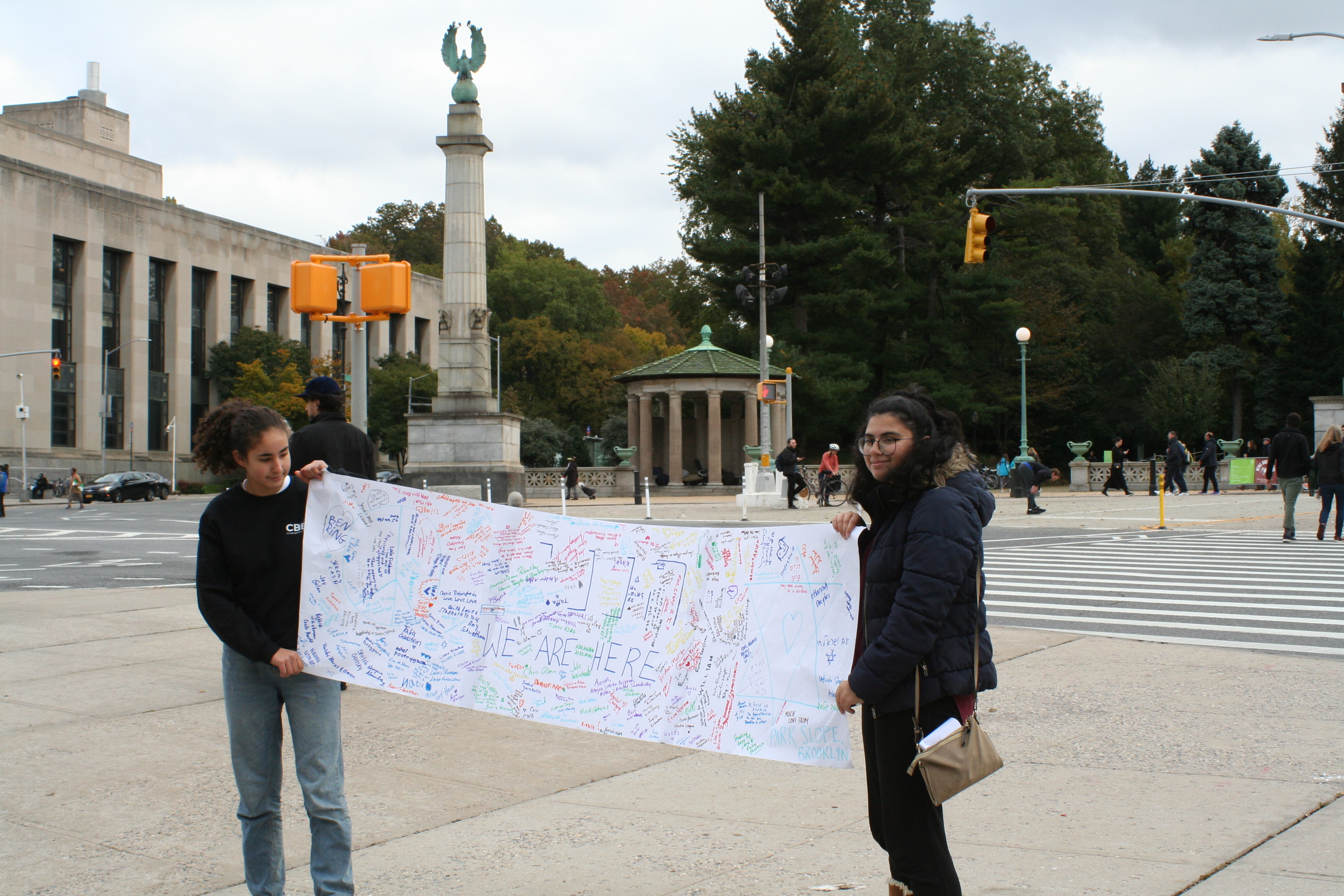 Youth Vigil for Pittsburgh organizers Sonia Chajet Wides (left) and Rachel Landis hold up a sign that reads “We Are Here.” Hannah Dreyfus/JW

Chajet Wides, along with Rachel Landis, a 17-year-old from Manhattan, spearheaded and co-led a Sunday afternoon youth vigil at Brooklyn’s Grand Army Plaza to commemorate those who were killed in the Pittsburgh shooting, which took place at the Conservative Tree of Life synagogue in the heavily Jewish Squirrel Hill neighborhood of Pittsburgh. About 200 teenagers, parents and children turned out for the midday vigil, where the crowd recited the mourner’s Kaddish for the victims. Teens and children scribbled their names and prayers on a large poster board, to be sent to the Pittsburgh community.

For those coming of age in a period of emboldened anti-Semitism — when neo-Nazis marched through the University of Virginia chanting “Jews will not replace us” just over one year ago — the words of grandparents and great-grandparents come into greater focus.

“My great-grandparents left Europe for America 100 years ago to escape anti-Semitism,” Landis told The Jewish Week. “Here we are, living in this country and this is still a reality.”

In her public high school in Manhattan, Landis described “small incidents” of anti-Semitism that could “easily be passed off a joke.” In a history class, a fellow student argued that Nazism was a legitimate form of government, a stance she vocally rejected. Now, more than ever, she encouraged her peers to stand up against anti-Semitic comments, even those said in jest.

“If there is anything this teaches us, it’s that words lead to actions,” she said, citing the shooters social media presence where he posted virulent anti-Semitic messages before carrying out the attack. Acknowledging social media’s ability to allow hateful messages to spread unchallenged, she said: “We first have to acknowledge the hate in order to stop it.”

If there is anything this teaches us, it’s that words lead to actions.

Chajet Wides also talked about her grandparents, who spoke frequently about the ability of anti-Semitism to resurface. “My whole life, my grandparents said this always has a potential to happen,” she said, recalling her grandfather who escaped Poland shortly before the Holocaust; he was the only member of his family to survive.

“We want to think we live in different times, we want to believe this is a thing of the past,” said Chajet Wides. “But my grandparents’ words are with me when something like this happens.” 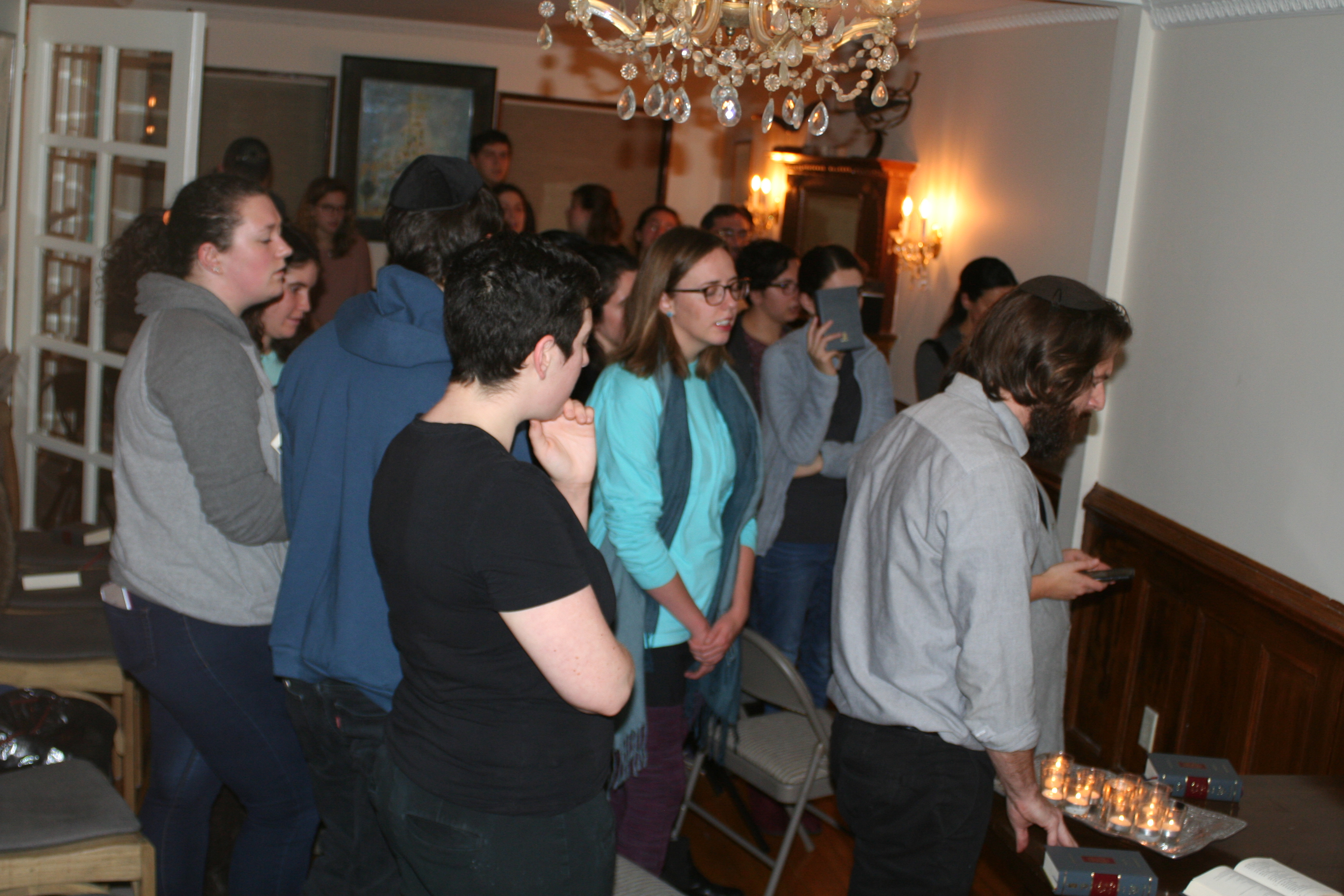 On Sunday evening, millennials from across the borough gathered in Base Brooklyn, a home-based, pluralistic Jewish community in Crown Heights. Rabbi Jon Leener, who heads up Base Brooklyn with his wife, Faith Leener, held a Torah saved from Poland and refurbished. The living room was packed as young people from across denominations recited Hebrew psalms for the victims and lit 11 candles for each of the dead.

Tova Perlman, a recent graduate of Brandeis University and a Pittsburgh native, attended the Base gathering. Perlman grew up attending the Tree of Life synagogue, where her father serves as the rabbi of one of the three congregations that meets in the building.

Her father, who was in the synagogue when the shooting took place, barricaded himself and several congregants in a storage closet in the basement to protect against the active shooter. She found out about the attack at lunch after attending Shabbat morning services at a local Brooklyn synagogue.

‘It is all surreal,’ she said, describing how her childhood synagogue has been transformed into a “crime scene” — bullet holes peppering the sanctuary walls, bodies on the floor, yellow [police] tape everywhere.

“It is all surreal,” she said, describing how her childhood synagogue has been transformed into a “crime scene” — bullet holes peppering the sanctuary walls, bodies on the floor, yellow [police] tape everywhere. “This is not the way things are supposed to be.” 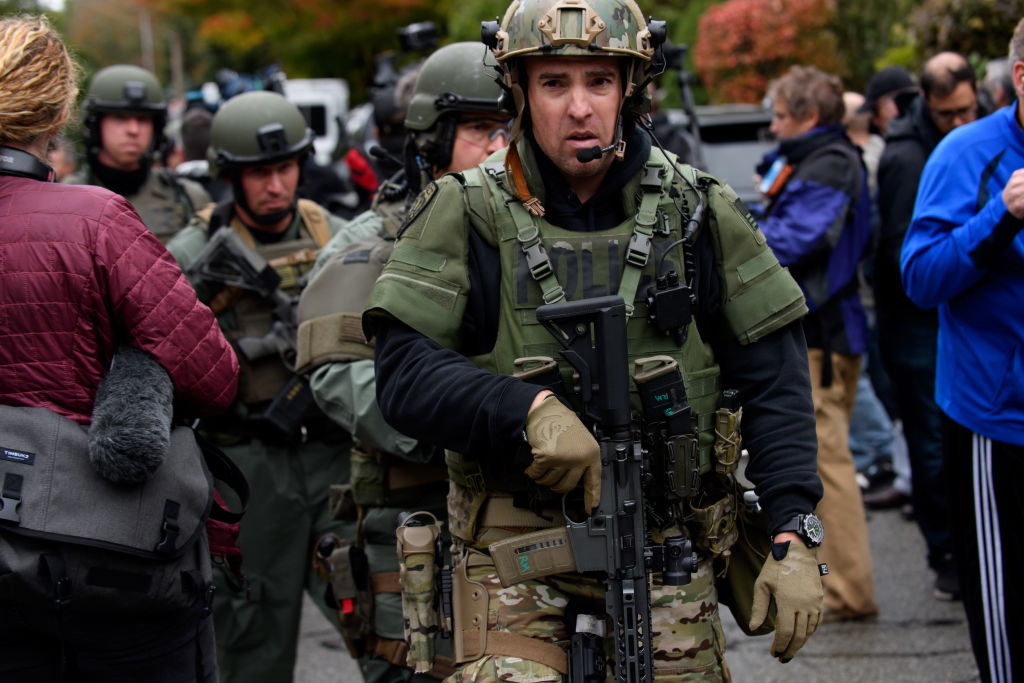 PITTSBURGH, PA – OCTOBER 27: Rapid reaction SWAT members leave the scene of a mass shooting at the Tree of Life Synagogue in the Squirrel Hill neighborhood on October 27, 2018 in Pittsburgh, Pennsylvania. According to reports, at least 12 people were shot, 4 dead and three police officers hurt during the incident. The shooter surrendered to authorities and was taken into custody. Getty Images

She remembered the victims as “core community members.”

“They were the ones who came to make a minyan when no one else wanted to come out,” she said. “I do not know what the shul is going to do without them.”

As her community and family sort through shattered memories and shattered glass, one message comes to mind. “We can’t afford to be complacent,” said Perlman, who is heading back to Pittsburgh today to mourn alongside her community. “I could never have imagined our quiet, peaceful shul as a target.”

Rabbi Leener, co-spiritual leader of Base Brooklyn, said Charlottesville was the “wake-up call” for many young Jews, including himself, that anti-Semitism is still alive in this country.

“The conversation I had then with young people around the Shabbat table then was, ‘Whoa — this is a different America,’” he said.

But when, on Monday morning, Rabbi Leener dropped off his son at a Jewish preschool in Brooklyn and saw police and security vehicles lined up outside the building, he described fighting back tears.

“Is this the world we live in now? Where my child needs security to go to school just because he’s Jewish?” said Rabbi Leener, 30.

Is this the world we live in now? Where my child needs security to go to school just because he’s Jewish?

Growing up as a “patriotic American,” his Jewish identity was never connected to facing threats or persecution. That may be different for the twenty-somethings he counsels, and for the Jewish teens and children directly in their wake.

“People are worried in a way I’ve never seen before,” said Rabbi Leener, who spoke about upping security measures at this own home-run operation after Saturday’s shooting. 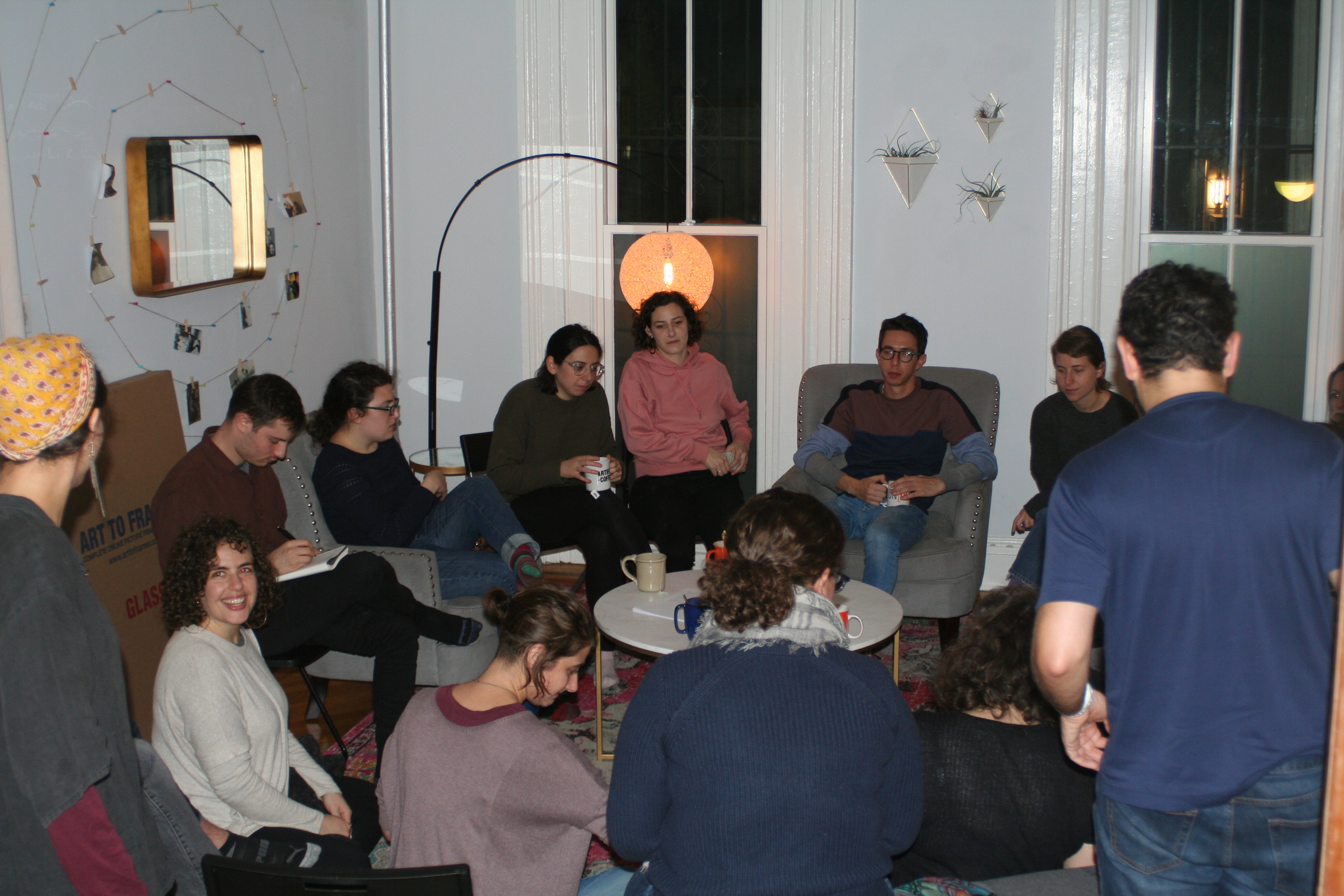 A subtle silver-lining: The newfound vulnerability of Jewish young people growing up in “this America” may “bridge a gap” between generations, he said.

“My bubbe always used to wring her hands and say in Yiddish, ‘It’s hard to be a Jew,’” said Rabbi Leener. “After Saturday, I understand her words on a whole different level.”

On Tuesday morning, Rabbi Leener will be traveling down to Pittsburgh with a group of six Base regulars to attend funerals of those killed and stand in solidarity with the Jewish community. Lisa Fierstein, a 25-year-old Brooklynite who grew up attending the Tree of Life synagogue with her parents, will be one of the six.

Fierstein, who attended a Sunday night vigil at Beloved Brooklyn, a home-based communal gathering space created by Rabbi Sara Luria, attended Hebrew school and celebrated her bat mitzvah at the Squirrel Hill synagogue. She recalled the then-rabbi asking people not to pelt candy at the bar or bat mitzvah after Torah reading was complete, a tradition in many synagogues. 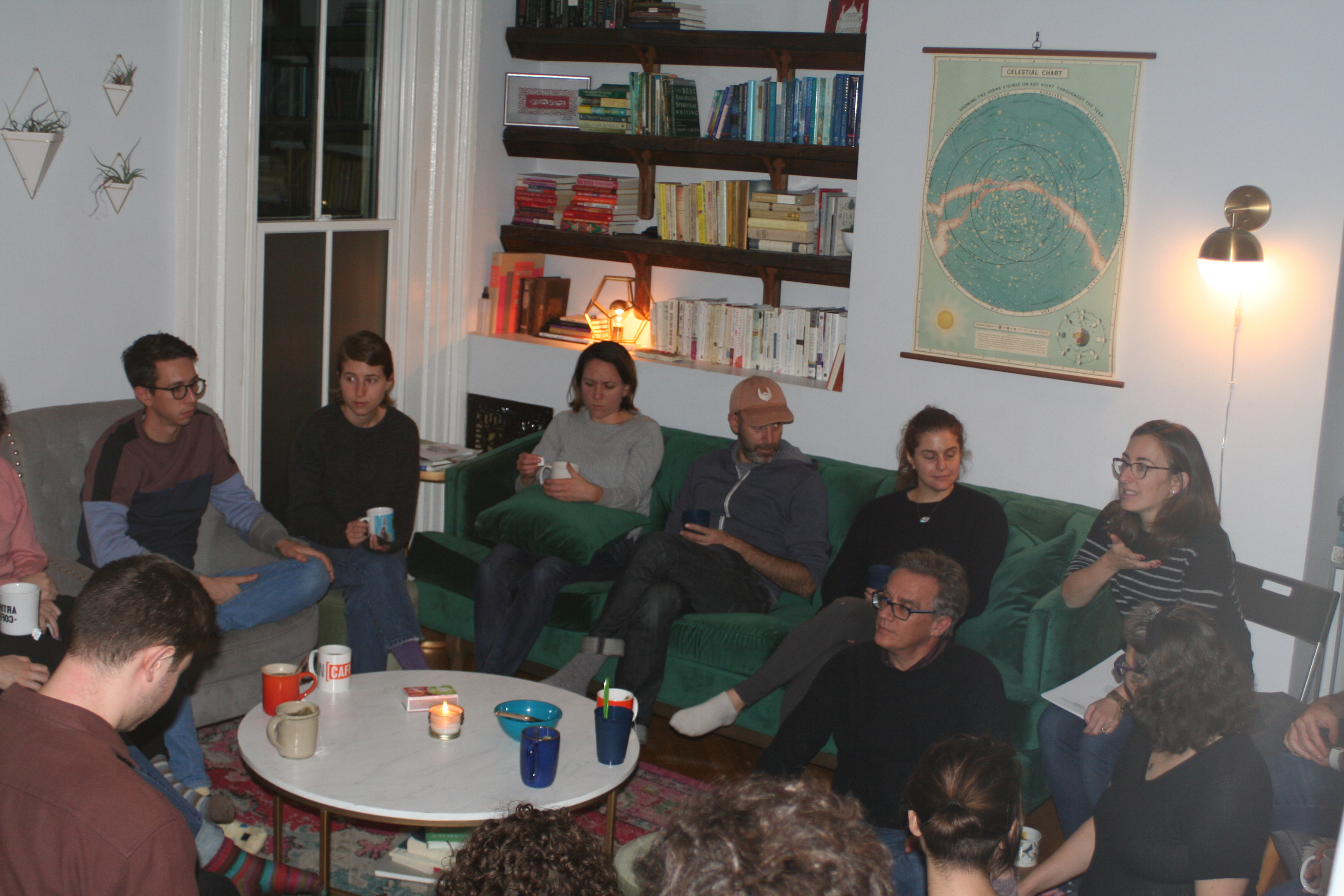 Rabbi Sara Luria led a meditation at a Sunday night vigil for the victims of the Pittsburgh shooting. Hannah Dreyfus/JW

“I remember he said the tradition was too violent,” said Fierstein, who today works for a podcast start-up company. “I can only imagine what he might have thought of bullets.”

Saturday’s massacre changed the way she thinks about her hometown and about living proudly as a Jew in America.

“Growing up, entering the synagogue was like going into a grocery store,” she said, contrasting the laid-back atmosphere with her junior year of college spent abroad in Amsterdam, where synagogues were secured with guards carrying AK-47s and synagogue-goers were questioned aggressively before gaining entry.

“Now, in the Trump era, we will need to secure our public worship spaces,” she said.  “The challenges of being Jewish in Europe don’t feel so foreign anymore.”

And, like security guards at synagogues and so much else, going home for Fierstein is forever changed.

“It’s never easy to return to where you’re from — it’s like visiting a piece of yourself from the past,” she reflected. “But now, I’m going back to something totally different. And it will never again be the way I remember.”