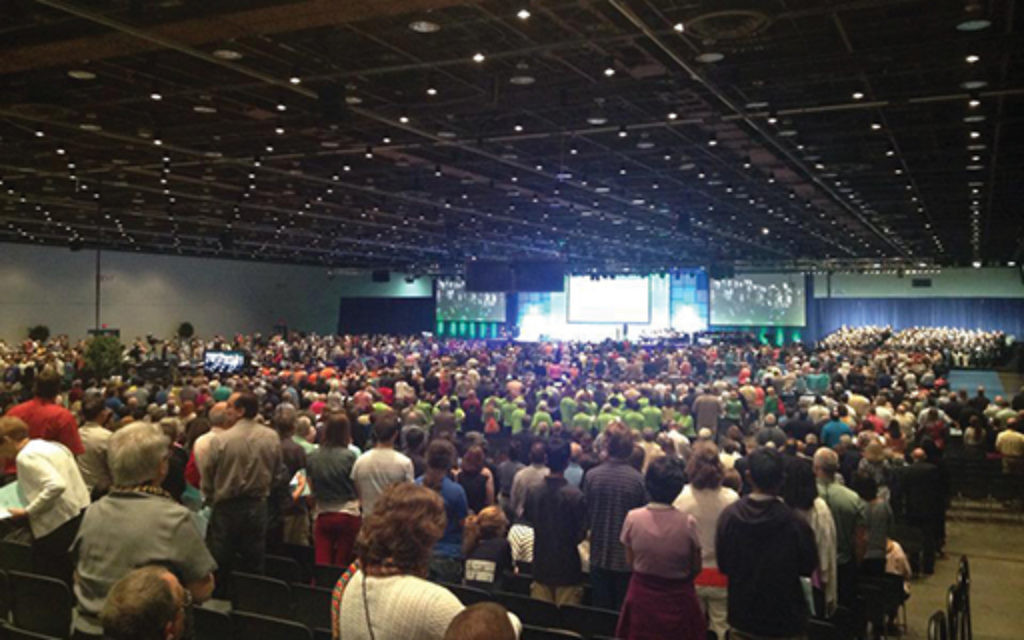 The Presbyterian Church (USA), which for a decade has drawn criticism from several prominent Jewish organizations for actions they see as overtly anti-Israel, adopted a report at its biennial national convention last week that again faulted Israel.

But this time, the Jewish organizations said they saw progress.

The 50-page report, “Israel-Palestine: For Human Values in the Absence of a Just Peace,” which was approved by a 429-129 vote at the General Assembly of the Presbyterian Church-USA in Portland, Ore., was accompanied by amendments that present a more balanced view of the Middle East conflict than the mainline Protestant denomination had espoused in the past.

One amendment affirmed the rights of both the Jewish and Palestinian peoples for “self-determination” and softened language of the report itself that opposed a two-state solution.

While the report “is full of innuendo, misdirection and unverifiable claims designed to lead people to believe two states are an impossibility,” the amendments also rejected automatic support for the anti-Israel BDS (Boycott, Divestment and Sanctions) movement, said Emily Soloff, associate director of the American Jewish Committee’s department of interreligious and intergroup relations via email. “This is a balance that has not existed in PCUSA overtures [resolutions] for a long time. The moderating action this year is hopeful.”

Soloff said “two small changes” in the report’s language that were accepted “at the 11th hour … turned the original intent [of the report] on its head … turning a one-sided ‘educational’ document into a real call for understanding the complexity of the issues facing Israelis and Palestinians. The G.A. accepted an amendment to the report which made explicit PCUSA’s support for two states, something that was woefully absent from the original report.”

B’nai Brith International released a statement saying the Presbyterians “again displayed a stunningly overt preoccupation with demonizing just one side of one complex conflict,” while the StandWithUs pro-Israel advocacy group said it “recognizes important improvements made in policy regarding Israel by the Presbyterians … the first Mainline Protestant Church to explicitly recognize the right of Israel ‘to exist as a sovereign nation.’”

“The PCUSA pretty much endorsed Zionism,” said Ethan Felson, executive director of the Israel Action Network, a joint project of the Jewish Council for Public Affairs and the Jewish Federations of North America. “They said they will oppose efforts to deny a Jewish right to self-determination — so that is good. They passed other resolutions that are bad. It’s a mixed bag.”

Some elements in the Presbyterian Church “were looking to break yet another horizon — they wanted to move the Church towards anti-Zionism,” Felson said. “Commissioners [church representatives] put their foot down that their church was not going to be in that anti-Zionist camp, because it’s an outrage.

He called the Presbyterian report and its moderating amendments “a sign that when push comes to shove [even-minded members of the Presbyterian Church] … will say ‘no’ to anti-Zionism … ‘no’ to efforts to deny the rights of Jews to national existence. I hope this would be a lesson that this type of anti-Zionism would be rejected across the [Christian] spectrum.

“I would love other churches to commit to oppose efforts to deny Jewish self-determination,” Felson said.

In a similar vein, the Anti-Defamation League released a statement praising the efforts of “rank and file members” of the church in support of “favorable language” to Israel at the General Assembly, while condemning “a number of problematic Israel-focused” motions that were adopted last week.

“The efforts by some in the church to vilify and demonize Israel, rather than promote dialogue and reconciliation, are particularly disturbing,” said Rabbi David Sandmel, the ADL’s director of interfaith affairs. “Especially egregious was a video” — shown to a committee at the convention to garner support for a boycott resolution — “that compared Israeli security checkpoints to the Nazi cattle cars that transported Jews to concentration camps.”

Rabbi Sandmel called the Middle East discussion at the General Assembly “part of more than a decade of destructive debates within the church that have at times led to harsh and biased criticism of Israel.”

“Churches and members within Presbyterian Church (U.S.A.) have stood out for their anti-Israel stance in recent years,” The Jerusalem Post wrote last week.

Calls to the Presbyterian Church (U.S.A.) for comment were not returned.

One amendment adopted at the latest General Assembly stated: “We stand with the people of Israel, affirming their right to exist as a sovereign nation, and we stand with the Palestinian people, affirming their rights to exist as a sovereign nation.” According to the amendment, “The Assembly … affirms our desire to stay in conversation with our partners in Israel who work for peace.”

The convention also passed a resolution that criticized Israeli treatment of Palestinian children.

Since 2004, the Presbyterian Church (U.S.A.) has adopted a policy of “phased, selective divestment” from some U.S. corporations that operate in Israel, recognized Israel’s right to build a security barrier along its pre-1967 boundaries, released a 74-page study guide that included a statement about a “pathology inherent in Zionism,” voted to divest from three firms that operate in the West Bank, and removed from its website a “Zionism Unsettled” booklet that depicted Israel as the aggressor in its relations with Palestinian Arabs.

“PCUSA has been in the vanguard of anti-Israel overtures and resolutions,” Soloff said in an email interview. “Their action is watched and often emulated by other [Protestant] denominations.”

The Church’s Israel-Palestine Mission Network “has been using the Israel-Palestine language” — accepting a Palestinian state as a fait accompli, and linking it with the Jewish state — “since its inception” in 2004, Soloff said. “As a shorthand, it is used by other churches, but it is becoming more of a dangerous meme.”

Soloff said “seeds of change were planted” at last week’s convention. “Instead of endorsing ‘prayerful study’ of BDS without reservation, commissioners accepted committee recommendations that insist that any study of pro-BDS material be matched by material from sources opposing BDS, and efforts to hear from pro-BDS proponents be matched by hearing from anti-BDS proponents. This is a balance that’s not existed in PCUSA overtures for a long time, and it came about because of work by people within the denomination.”

Representatives of the AJC, local Jewish Community Relations Councils and other Jewish organizations have participated in extensive dialogue and lobbying programs with local members of the Presbyterian and other Christian churches for several years. “Having local Jews meet with commissioners does make a difference,” Soloff said.

“We put in hundreds of hours” with the Presbyterians, Felson said. “We had an effective campaign. The rank and file of the church stand with us.”

Felson said, “There is a wide divide between the national church, which is led by people very hostile to Israel and the organized Jewish community, and Presbyterians in pews who support both Israelis and Palestinians.”

Meanwhile, delegates at a convention of the Unitarian Universalist Church last week voted to reject investments in companies that operate in the “occupied territories,” but the resolution did not receive the necessary two-thirds majority for passage.