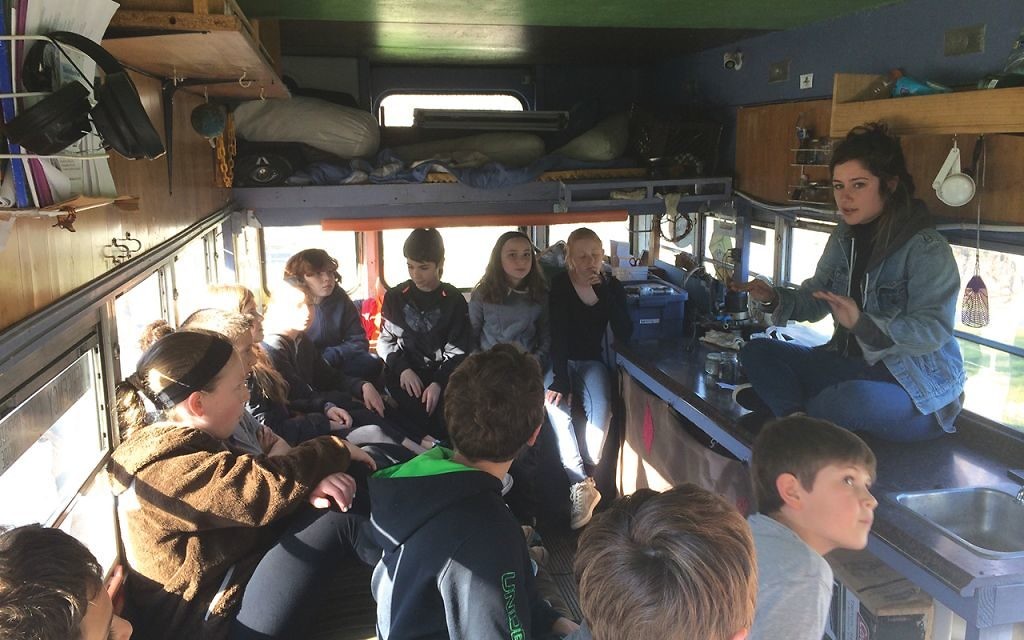 When Hazon, a Jewish environmental organization, showed up at the Community Synagogue of Rye last month with their Topsy-Turvy bus — powered by vegetable oil — religious school students had the chance to ride a bicycle to power a blender to make their own smoothies.

This was precisely the kind of experience that the Westchester Jewish Greening Group, a new coalition of congregations and members who want to enhance environmental awareness and action, wants to see around the county as a way to feature environmental education within their religious school programs.

“This is a way to revitalize Jewish education,” said Becca Linden, director of the Jewish Greening Fellowship at Hazon. “It’s a way Jewish values come to life, where students are Jewishly engaged. It’s a way to do something more creative. Jewish tradition has all this stuff to say; it’s a great entry to Jewish life. You can energize kids through environmental activities.”

At an early organizational meeting during the winter, the group discussed some of their individual programs, and ways in which they could be scaled or modeled elsewhere throughout the county. Participants belong to a wide range of congregations and organizations in Westchester including Bet Am Shalom, Westchester Reform Temple, Greenburgh Hebrew Center, Community Synagogue of Rye, Congregation Kol Ami, Temple Israel Center and the Hebrew Institute of White Plains.

Much of Hazon’s work in this area is about breaking down the silos that have long separated nature from Jewish education, instead teaching and encouraging students and congregants to see the connection. As Elan Margulies, director of Teva, a Hazon program that works to provide experiential learning incorporating Judaism, ecology and food sustainability, said, “This movement is a great equalizer, and a lens into Judaism, moving into the larger world and about the impact we can have in the world.”

Rooting the concepts in Torah—like the brit adamah, or covenant with the earth—educational activities can include other aspects of ritual, like growing herbs to use for Havdalah, making cheese for Shavuot or grinding their own wheat. At the April 13 session in Rye, participants planted micro-greens and discussed how to build a city, including how to get rid of garbage. A conversation about what kinds of plant species should be part of a garden included a list of the 10 species of Jewish life.

“We want to make children much more mindful,” said Dale Oberlander, director of the early childhood center at Community Synagogue of Rye, where nursery school children participated in planting and tending a vegetable garden. There is also a composting program. “We’re looking to ‘green’ the playground, to have more of an outdoor classroom and have more children involved with natural materials.”

Other efforts at the Community Synagogue of Rye, according to Cantor Melanie Cooperman, include having bnei mitzvot families commit to having an environmentally-friendly event that reflects “Jewish values” and using a trail on the grounds, to “bring classes outside and studying outdoors in nature as a prayer space.”

Congregation Kol Ami combines art appreciation with nature appreciation for their 4- and 5-year-olds, and will be adding a class for 3-year-olds next year. Temple Israel Center’s Ellen Weininger shared that her community’s focus is on composting and energy auditing. Nancy Sklar of Greenburgh Hebrew Center said their in-house catering committee is composting and working with the congregation.

The group met at Westchester Reform Temple in April for a presentation on that congregation’s zero-waste program. “Anything held at our temple is reusable, recyclable and compostable,” said Michelle Sterling, a member of Westchester Reform Temple and the Westchester Greening Group. “We’re not throwing out food anymore.” Caterers who work in the building are brought up to speed about this initiative. “We want to get all houses of worship to zero waste.”

Although the projects may differ, Cooperman said that the Westchester Greening Group members are making progress. “The focus remains on education,” she said.