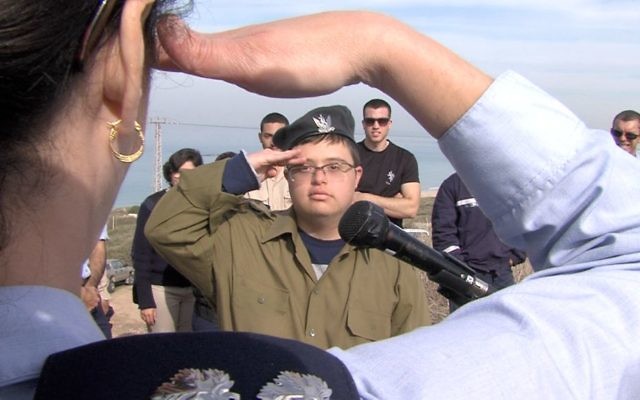 Editor's Note: In 2001, IDF Lt. Col. Ariel Almog was driving in his car near Sde Trumot junction in the Jordan Valley. Ahead of him was a bus, stopping to take on passengers. He averted a catastrophe, at great risk to himself, and during his convalescence he encountered many people with disabilities. The result is a groundbreaking IDF inclusion program.

I could see a man approaching the bus in a suspicious manner. This was a difficult time, with many terrorist bombings against Israeli civilians. I stepped out of my car and realized that this was a terrorist, carrying an explosive device. After a short struggle I was able to control him, and was astounded to discover 3 explosive devices on his body. The terrorist's intention was to create a double attack and to activate the remaining bombs by remote control after detonating the first one, thus hitting police and rescue forces.

After having neutralized the terrorist, suddenly shots were fired at me from a nearby olive grove. Apparently another terrorist was hiding there in order to assist his comrade if needed.

I was hospitalized for two and a half months and I thank God every day that I’m alive.

During that time, I was exposed to many injured people with disabilities. I was thinking to myself, we say "All of Israel is responsible for one another;” this expresses the commitment of Jews throughout the generations. Indeed, it seems to be the very secret to the survival and existence of the Jewish people.

So my dream was to create a project that would incorporate disabled teenage boys and girls into the IDF. As you know, unlike for American youth, for most young Israelis service in the IDF is a normal part of life in the years between high school and college. Service becomes a core rite of passage in Israeli society and an empowering, transformative experience.

But what about the youngsters with special needs? Way not to give them also opportunity to be part of the IDF like everyone else? For me this is the essence of the Jewish feeling of "Arvut Hadadit," shared responsibility.

In 2009, I was lucky enough to fulfill that dream and integrate tens of special needs boys and girls into the Home Front Command head base of which I was the commander at the time, thus making them an integral part of the IDF and recognized as soldiers in every aspect. This is the beginning of a revolution, which will integrate thousands boys and girls with special needs into the IDF specifically, and Israeli society in general.

“Great in Uniform” is a program intended for young special needs adults to serve as volunteers in the IDF. The goal of the this project is to provide the participants to experience military service, provide a sense of being “like everyone else” and prepare them for an independent life in the future.

The program, which lasts three years, provides a supportive environment. During their service the participants reside in an assisted living community. They receive individual guidance for self-improvement from a team of professional, certified staff as is required by the Ministry of Social Affairs criteria.

Each participant undergoes a four-day basic training course, personally adapted, including living in a military tent, learning military and IDF rules and regulations, accomplishment of missions and more. Before their induction into the IDF, the soldiers partake in a beret march across the Israel Trail, at the end of which a ceremony is held in the presence of parents and family members in which the soldiers receive the coveted beret. The exciting march connects the soldiers to the essence of the IDF and instills motivation and social values.

The soldiers serve in several bases in central Israel and are integrated in various duties such as the kitchen, equipment storage, and quartermaster as well as canteens in various capacities: assembly of gas masks, packing batteries, organizing military equipment, dining room and canteen duties and more. The soldiers enjoy performing their duties and the IDF appreciates and cherishes their dedicated service.

Throughout the program, the soldiers are accompanied by dedicated and experienced professionals who invest all their energy as well as warmth and affection. The team comprises a psychologist, a social worker and counselors who underwent professional training.

For more information on "Great in Uniform," please visit us at www.special.org.il.

Lt. Col. Ariel Almog received the Chief of Staff Medal of Appreciation for risking his life and prevented a multi-casualty terrorist attack. As a volunteer, Lt. Col. Ariel Almog is the Chairman of Gdolim BeMadim, a groundbreaking program on inclusion in the Israel Defense Force, this important project enabling young people with disabilities in Israel to perform significant supportive and productive tasks as part of IDF service.