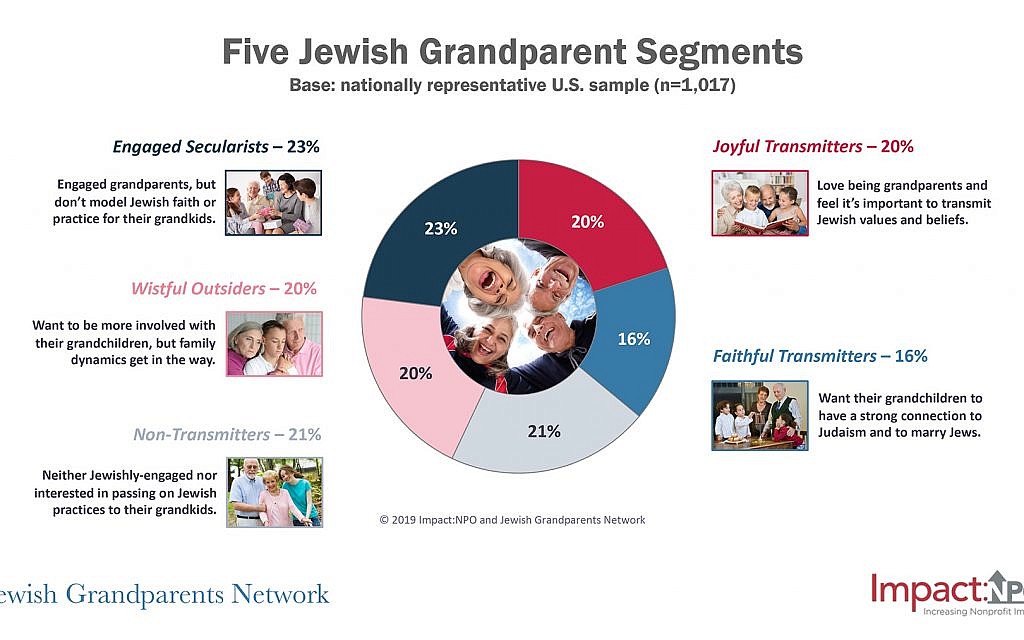 The survey reveals five groupings of grandparents based on their levels of Jewish engagement and willingness to pass on Jewish values. Jewish Grandparents Network/Impact:NPO

Lee Meyerhoff Hendler recalls a pivotal moment that led her to co-found The Jewish Grandparenting Network (JGN), a new organization that recognizes the unique perspective and opportunity grandparents have to influence their grandchildren Jewishly — especially vital when so many children are growing up in multi-faith families.

The encounter took place in 2015 in Washington, D.C., at the General Assembly of the Jewish Federations of North America. Hendler, who has been deeply engaged in synagogue and Jewish communal life in Baltimore, and nationally, for many years, was growing frustrated with a session she was in that dealt with strategies to engage millennial Jews.

During the Q&A session, she raised her hand and asked the panelists, “How come you’re not talking to me?

“All four of my children and their spouses are on my phone,” Hendler continued, pointing to her iPhone. “And they’re connected to me. I talk to them every week. If they do Shabbat dinner, it’s most often with me. If they have a seder, it’s with me or one of my siblings. I have a sukkah in my backyard, which they help build. None of them has a rabbi — and that’s the experience of my friends, too.”

Hendler added that she belongs to a synagogue, supports Jewish federations and is active in a major Jewish family foundation.

Some in the audience applauded, Hendler recalled, while those on the dais were not happy. “I was not playing according to their agenda.”

In effect, Hendler was contesting the Jewish establishment’s emphasis on and approach to Jewish millennials, the segment of the community most difficult to engage because young people are far less interested in religious and communal affiliation than their elders. Further, she was pointing out that while older Jews — grandparents like her — could and should be playing a vital role in transmitting Jewish experiences and values to the next generation, they are largely being ignored by communal institutions.

“Lee was challenging the Jewish community to acknowledge the essential, complex and often under-recognized role of grandparents in this era of the ‘New Jewish Family,’” noted David Raphael of Atlanta, co-founder and CEO of the JGN.

A former Hillel International executive, Raphael has been traveling around the country since August 2017, as has Hendler, building support for their initiative. With the backing of 17 partner organizations and foundations, JGN completed what is believed to be a first-of-its-kind survey and shared its results this week with The Jewish Week. Based on an online survey taken in recent months by more than 7,800 Jewish grandparents between the ages of 55 and 80, the study offers a detailed look at the changing Jewish family of the 21st century, focusing on how grandparents interact with their grandchildren. In addition, about 1,000 Jewish grandparents were selected at random, in order to provide nationally projectable data. The study examines grandparents’ attitudes and beliefs toward Judaism and family relationships, and where the Jewish community could address their needs and aspirations as Jewish grandparents.

While the full report will not be ready for several months, the survey found that most Jewish grandparents have two adult children and just one or two grandchildren under the age of 18. Almost half (47 percent) of the grandchildren have a non-Jewish parent, most often Christian. (Only 20 percent of the grandchildren are being raised solely in another faith.)

A key segment of the 47-page report, titled “Understanding and Engaging Today’s Jewish Grandparents,” breaks them down into five categories:

♦ Non-Transmitters (21 percent) are “neither Jewishly engaged nor interested in passing on Jewish practices to their grandkids”;

♦ Wistful Outsiders (20 percent) “want to be more involved with their grandchildren, but family dynamics get in the way”;

♦ and Faithful Transmitters (16 percent) “want their grandchildren to have a strong connection to Judaism and to marry Jews.”

In addition to the statistical data, the survey — and focus groups and one-on-one conversations held around the country — shed light on the personal challenges grandparents face in navigating dramatic cultural and familial change in American society today. They are dealing with grandchildren whose parents may be of different faiths, divorced, members of the LGBTQ community, living far away or too busy to share time together; some grandchildren may be alienated from their grandparents by their parents.

Among the situations shared by participants in the survey were grandparents with one adult child who is a rabbi and raising children in a shomer Shabbat home, and another child who is intermarried and wants no connection to Judaism. There were grandchildren who have eight grandparents as a result of divorce and remarriage; grandparents whose spouses are not Jewish and who are ambivalent about Jewish practice in the home. And countless other complex circumstances.

Raphael described a wide range of emotions shared by grandparents, from the deep joy in having a role in the lives of their grandchildren to the “pain and heartache” of feeling shut out by alienated children and/or in-laws.

In meetings with communal, religious and educational leaders around the country in advance of the survey, Raphael and Hendler made the case that today’s “boomer” grandparents are more involved in and able to play an active role in the lives of their grandchildren, and often serve as their bridge to Jewish life — enrolling them in Jewish preschools, camps, JCCs or synagogue activities, and often footing the bill.

The survey findings reinforced the notion that the more involved the grandparents are in Jewish practices and traditions, the more likely they were to include their grandchildren with them in such customs.

David Elcott, the principal partner of B3/The Jewish Boomer Platform, which seeks to strengthen Jewish community by engaging baby boomers, believes that “grandparents are on the front lines” of the effort to connect young children to Jewish experiences. Sociologist Jack Wertheimer, in his research, has described Jewish grandparents as “American Jewry’s great untapped resource.”

Karen Radkowsky, whose marketing research company, Impact: NPO, produced the survey, found the most surprising outcome to be the large number of people who chose to participate in the 20-minute questionnaire. Most were invited through their affiliations with nine Jewish federations around the country and eight other Jewish organizations.

Radkowsky and Raphael said the response indicated the high level of engagement, interest and enthusiasm about JGN and its goals, which include providing tools and resources to help enhance the time grandparents spend with their grandkids, empowering grandparents to transmit Jewish culture and values through their own stories, and supporting grandparents in dealing with the complications of cultural and familial change.

Grandparents not only bind our families and our Jewish community to our past, but are essential partners as we look to the future.

“When my grandparents were 70, they were old,” Ron Wolfson, 69, an expert on relational Judaism and member of the JGN national advisory board, told me. He said healthier and more active boomers today, given the resources of the internet and FaceTime, allow this generation to be far more connected with its grandchildren. “We’re looking at a golden age of Jewish grandparenting,” he said.

Jane Shapiro, a prominent Jewish educator in Chicago, addressed the delicate issue of how much — or how little — advice a grandparent should offer adult children on parenting. She speaks of the need for tzimtzum, the concept of reducing one’s presence, in such situations. Shapiro would like to see JGN create “arcs of tradition,” opportunities to link generations through retreats.

Larry Moneta, who will soon retire as vice president of student affairs at Duke University, said that as a self-described “Jewish atheist” with strong cultural and communal ties to Jewish life and two children who married non-Jewish partners, “I’m part of the New Normal” of American Jewish life. He said that both sets of parents intend to raise their children as “at least predominantly Jewish.” He sees his role as “contributing Jewish values” to his grandchildren’s lives. “You have to navigate carefully,” he noted, based on the preferences of the parents. And with the families living far away, “we experience bursts of Jewish engagement” around Jewish holidays.

Moneta, who is also a member of the JGN national advisory board, said he would like to see the JGN become “a productive think-tank for now and the future,” an influencer of programs and ideas for synagogues and JCCs as well as the home. “The opportunities are vast,” he said, “and the data reveals a hunger for discourse, ideas and intervention.”

Raphael said the next step calls for mining the survey, exploring ways to have the JGN expand its network of engaged grandparents and community leaders; and providing innovative programming, webinars and learning opportunities on a website that also would allow grandparents to share stories, suggestions and questions. A two-day retreat is planned for June to bring together grandparents, professionals and leaders to meet with scholars and experts to discuss collaboration.

“We believe that grandparents not only bind our families and our Jewish community to our past,” Raphael said, “but are essential partners as we look to the future.”