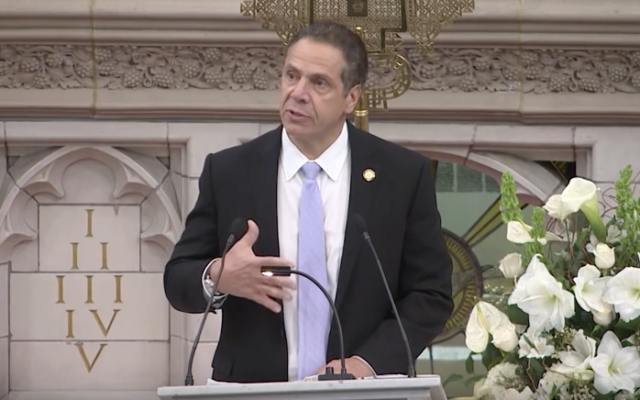 In the wake of an escalation of incidents following the election, New York Governor Andrew Cuomo called for the creation of a special unit within the State Police to address hate crimes in New York. At an address at the Abyssinian Baptist Church in Harlem on Sunday morning, Cuomo called on New Yorkers to unite in the fight for tolerance and justice.

“With trained professionals we will investigate every incident and prosecute the perpetrator to the fullest extent of the law,” Cuomo said, vowing that the laws of New York will protect every citizen.

“The ugly political discourse of the election did not end on Election Day, in many ways it has gotten worse, into a social crisis that now challenges our identity as a state and as a nation and our people,” Cuomo said, referring to a string of hate crimes and racist vandalism that has increased since the election.

“I wish I could say our beautiful state of New York was immune from this poison but it’s not,” Cuomo said, mentioning numerous racist incidents including gr swastikas graffitied on public property in NYC. “New York is the welcome mat to the world. Ellis Island is where generations signed the American compact. The Statue of Liberty stands in our harbor and New Yorkers hold the torch, and today, that torch must be held higher and that torch must shine brighter than ever before.”

Cuomo reaffirmed his commitment to keep New Yorkers safe and to fight against bigotry.

“We will fight sexism and racism and bigotry wherever we see it,” he said. “We will stand up for the rights of immigrants because we believe our diversity is a strength, not a weakness.” Cuomo pointed out that he himself is the son of immigrants.

In addition to the creation of the special unit to combat hate crimes, Cuomo stated that, come January, he will propose to expand the Human Rights Law come, to explicitly protect all children.

Cuomo also said that New York will ensure that every person has legal protections, whether they can afford it or not, and announced plans for a public-private legal defense fund to provide legal assistance to immigrants who can’t afford their own defense.

“We are here to share benefits and burdens,” said Cuomo. “We are here to grow with one another and invest in one another. That is the way this made New York the greatest state in the country. We took different religions, different cultures and we said we will operate as a family.”