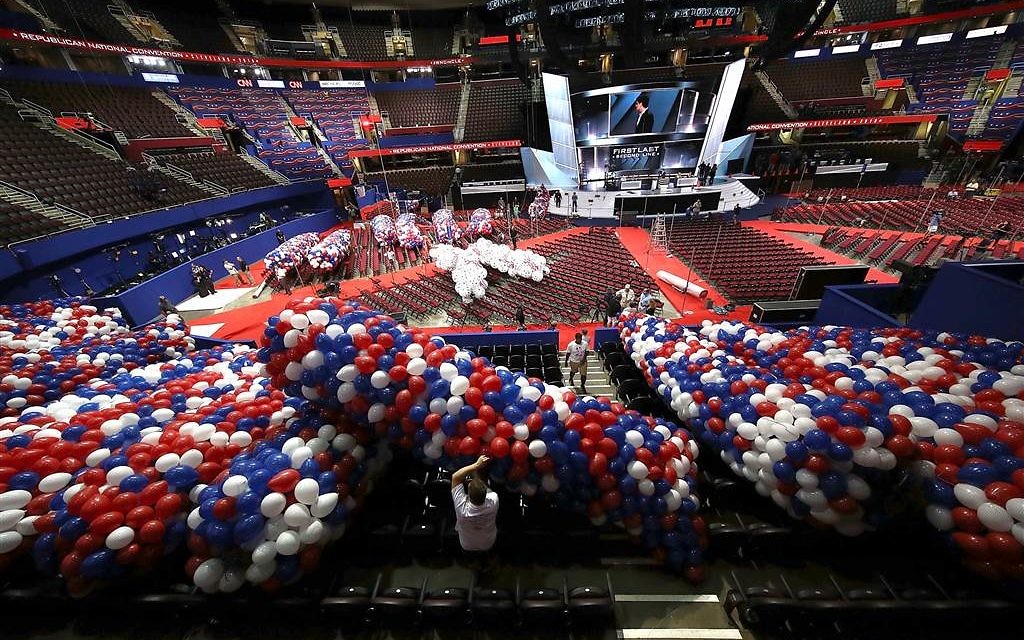 Cleveland — New York delegates attending the Republican National Convention here were challenged to get out the vote in November for Donald Trump, their party’s presumptive nominee, to offset the overwhelming vote Hillary Clinton is expected to amass in the five boroughs.

“If you break the city, you own the state,” former House Speaker Newt Gingrich told the 500 delegates and alternates in a Monday morning breakfast pep talk over eggs and chocolate chip pancakes. “And you start by asking people a single question, ‘Are you happy.’ Manhattan will be the hardest of the boroughs [to break].”

Gingrich said he believes Trump can win the presidency because he is a “symbol of the underlying discontent of the people.”

Security is the theme of the first day of this week’s convention, which ends Thursday with Trump’s expected acceptance speech. Economist Lawrence Kudlow, who worked in the Reagan administration and is an economic adviser to the Trump campaign, told the delegates that “you must have a strong economy at home” to have diplomatic influence overseas.

“For the last 15 years we have been weak at home and have lost jobs, and overseas, regrettably, our friends barely have respect for us and our foes barely fear us,” he said. “Donald Trump is running as a Ronald Reagan free-market, supply-side capitalist. He is running on a platform that would have the biggest fees and tax cuts — a 15 percent tax on large and small businesses — it is now 40 percent and we are not competitive with the rest of the world. … Middle-income people have not had a wage increase since 2000, and that has to change. And on the first day he will repeal Obama’s executive orders. I have been working with him on that. His instincts are superb — and that is what is very important in a president. We [his advisers] are doing little tweaks — that’s all we’re doing.”

“Probably $3 trillion will come back to America [through Trump’s changes] — that’s 5 to 6 million jobs at good pay,” Kudlow added. “And economic growth solves growth and wages and helps solves poverty.”

Gingrich said the “greatest threat to the U.S. is a weapon of mass destruction going off in an American city.”

He said terrorists might be able to buy a nuclear bomb from North Korea or Pakistan. He also added Iran, but Iran still does not have the bomb.

“You know how horrifying 9/11 was — add two zeros. … They are going to find ways to kill us — to destroy our civilization.”

Gingrich pointed out that just last week it was revealed that the terrorists who carried out the attack on the Paris nightclub last year had “mutilated and tortured” many of their victims.

Kudlow pointed out that only French President Francois Holland “has declared war on ISIS” and that President Barack Obama has not.

“I want the U.S. to make a formal declaration of war,” he said. “I’m interested in sending a message to them and to lone wolves who think ISIS is winning because we have no strategy for winning. … Lone wolves are on the wrong side of history.

“It is the Republican Party that in 2016 must stand defend the cops. That’s security at home that we are now lacking. There is war on cops. Mrs. Clinton on CNN before the cops in Dallas ran towards the killer to save people had the gall to say there are 18,000 police departments, they are all racist and need new training. That is wrong. Police departments are mixed. Obama said he has to tell his girls to look out for cops. But 99 out of 100 are good cops. I need leadership from churches and synagogues.”

Tennessee Sen. Bob Corker, chairman of the Senate Foreign Relations Committee, also spoke to the New York delegation and told them that the police in his state “feel despondent” and believe they have a “lack of support” from the public.

“But when they hear Trump’s name, they brighten up because they know he stands up for them fully,” he said.

Corker went on to criticize Obama for allowing Syrian President Bashar Assad to cross the “red line” he had imposed and instead allow Russia to stop Assad from using chemical weapons against his own people. And he said Obama’s failings allowed Russia to exercise its muscle in the west Crimea.

“That is why this race is so important,” he said.

Asked about a new trade agreement with the United Kingdom after its vote to withdraw from the European Union, Corker said the new U.S.-U.K. agreement should be the “gold standard of trade agreements.”

Regarding the failed coup on Turkey, Corker said Turkey is a NATO ally but that Turkish President Recep Erdogan has assumed greater and greater powers unto himself, which presents a “dilemma for us.”