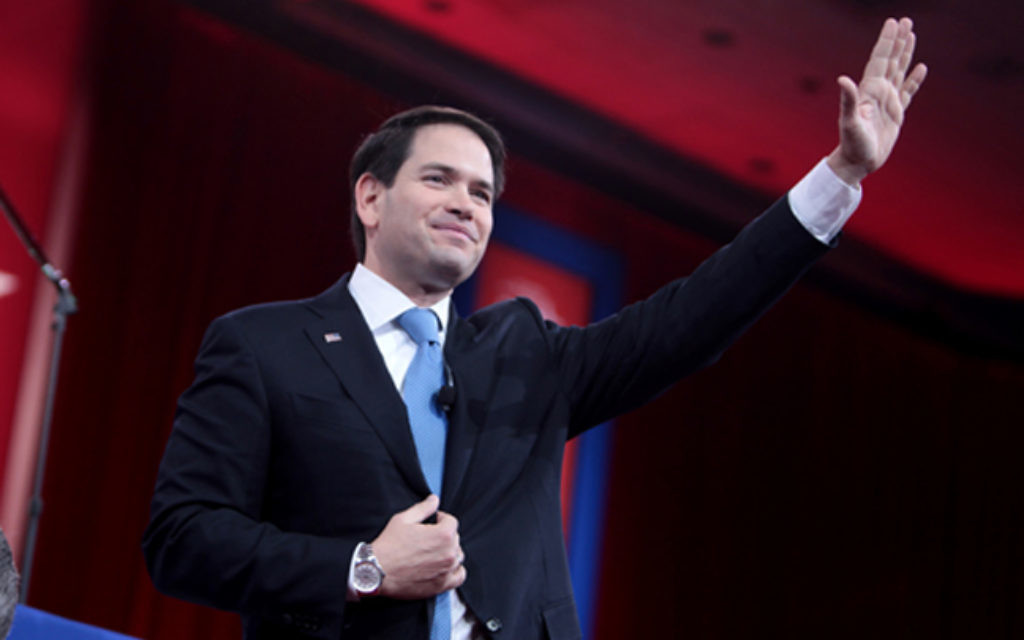 The Republican Jewish Coalition’s presidential “primary” last week in Washington — offering more than $100 million in contributions, but let’s not talk about money — was likely the most important preliminary event of the campaign. It was the only event (aside from debates) that all the Republican candidates agreed to participate in, and it marked a clear distinction between Jewish Republicans and non-Jewish Republicans: The “outsiders,” Donald Trump, Ben Carson and Carly Fiorina, prominent in polls and among pundits, made little serious impact at the RJC, while proven Israel loyalists Marco Rubio, Ted Cruz and Jeb Bush received the biggest ovations, according to several RJC directors.

If we are indeed “in the midst of the next world war,” as Chris Christie said, a reference to recent terror attacks in Paris and on these shores, the RJC clearly wanted someone in the White House who could be trusted to tag-team with Israel’s prime minister as Franklin Roosevelt did with Winston Churchill, as opposed to the current animosity.

The Hill, the Washington-based political newspaper, thought Bush and Cruz got the warmest receptions. Carson “stumbled through a snoozer of a speech that read more like a book report than a statement of authority.” CNN said, “The audience’s clear favorites of the day” were Cruz and Rubio, two young Cuban-American senators “with demonstrably pro-Israel track records.”

Trump, the only candidate with an Orthodox daughter and grandchild, looked around the RJC billionaires and power brokers, and said, “I know everybody in this audience.” He added: “Is there anyone in this room who doesn’t negotiate deals? This room negotiates a lot … perhaps more than any room I’ve ever spoken to.” Trump said he would have negotiated a tougher nuclear deal with Iran than the “catastrophe” the president did. Obama “is the worst thing that’s ever happened to Israel,” he said.

But then Trump said, “You’re not going to support me because I don’t want your money. … You want to control your own politicians.”

“What the hell does that mean?” tweeted Ari Fleischer, former George W. Bush press secretary and now on the RJC board of directors. One member of the RJC board said of Trump’s words, “If that’s not anti-Semitic I don’t know what is.” The Anti-Defamation League, however, defended Trump, issuing a statement saying “context is everything. Mr. Trump’s presentation was completely supportive of Israel and the Jewish community.”

Ezra Friedlander, the chasidic CEO of the Friedlander Group, a public affairs organization, said Trump reminded him of “Archie Bunker, or rather Jackie Mason. He didn’t speak with anti-Semitic overtones; he was trying to be funny. I was able to realize how he’s both appealing when expressing his most raw, unpolished feelings, and also how dangerous it is to see a candidate be so unprepared. Perhaps he burnished his comedic credentials, but didn’t earn any points as a serious candidate.” When it came to something serious, such as a question about Israel’s sovereignty over Jerusalem, he said, “his body language told me he had no idea what the question was about.”

A few days later, when Trump suggested banning all Muslims from entering the United States, Jewish groups lined up all over again to explain his comments or express their fury and frustration.

Of course, money was an issue. RJC board member Sheldon Adelson, the Las Vegas billionaire, contributed more money in the 2012 election than anyone else. The Wall Street Journal recently pointed out, “The RJC board is stocked with some of the GOP’s biggest rainmakers, including former ambassadors and a former Republican National Committee chairman,” wrote the Journal. “Many of the candidates,” including Bush, Christie, Rubio and Cruz, “organized fundraising events around the RJC forum.”

Phil Rosen, a RJC board member and a lawyer with Weil, Gotshal and Manges, said the Coalition event revealed the emergence of strong, conservative, pro-Israel candidates who had a real chance to win next November. “The stars were clearly Cruz and Rubio; they did fabulous.” Rosen is backing Rubio, saying “he’s the right person to lead our nation into the future. I say that very carefully.”

Rosen, also a strong supporter of Likud, explained that the Coalition will not endorse anyone until the convention does. “Then we will gather around and support that candidate beyond all extremes.” Until then, Coalition members can support and contribute to whomever they please, though not all of the 14 candidates have support in the RJC.

The race in the RJC, said Rosen, is down to “Rubio, Cruz, Bush and maybe Christie. There may be a straggler here or there supporting Carly [Fiorina]. You do have people supporting Lindsey [Graham], knowing full well that the possibility of him winning is getting less every day. You kind of wonder whether he’s trying out for secretary of state.”

Jeff Wiesenfeld, a principal with the investment firm AllianceBernstein, a former aide to Gov. George Pataki and a leading activist on the Jewish right, said, “In a perfect world, beyond any question, with the situation that we’re facing today… the best qualified candidate is Lindsey Graham. But Graham, I don’t have to tell you, has not caught fire. … People seem to be putting money into Rubio right now. It seems to be moving in his direction.”

At the same time, said Wiesenfeld, “There’s a lot of emotional appeal that I have, and others have for Cruz, but there’s a perception that he wouldn’t be able to win.” He said, “Cruz doesn’t have, let’s be honest, the same likeability factor that Reagan had,” just as Jeb Bush lacks his brother’s charm.

Friedlander liked the way “Cruz came out swinging,” saying the United States needs “a wartime president to defend it.” Cruz said colleges that endorse BDS should lose their federal funding, as “anti-Semitism hides behind the label of anti-Israel.”

Cruz said our approach to jihadists should be very simple. “We win. They lose. … If you wage jihad against the United States of America, you will sign your death warrant.”

RJC board member, Fred Zeidman, chair of the Gordian Group investment bank, and a veteran Republican fundraiser, said people were talking about what a great job Bush did. “We’re supporting Jeb. His energy level was back up, which has been a criticism [from Trump, in particular], and he’s resonating much better in the Jewish community. I always felt good about Jeb on Israel. He was doing things for and with Israel long before he needed to or had to.”

“Allies,” said Bush, referring to Israel, “need to know we have their back,” and he promised to undercut the Boycott, Divestment and Sanctions (BDS) movement against Israel. Rubio said BDS was “despicable,” and pledged to “call on university and religious leaders to speak out with clarity and force on this issue — the same way they speak out on racism.”

Sometimes, one supporter presents a problem for other supporters. Rubio was recently challenged by Christian conservatives in Iowa about his support from Paul Singer, an RJC board member and hedge fund billionaire, who has a gay son and who contributed millions of dollars to support for gay marriage. Rubio, however, does not support gay marriage and has been advocating for a religious person’s “right to exercise your faith in every aspect of your life,” a key issue for Orthodox Jews, as well.

Of course, gay rights is not Singer’s only concern. The Washington Post said, Singer is a “staunch supporter of Israel.” For many conservative Jews, Israel seems to be the most important issue of all.

Rubio, among the least-wealthy candidates, solidified his bond with religious parents who are tuition-poor when he said on “Good Morning America” that he understands financial pressure because “I send my kids to private Christian schools.”

However, The New York Times reported that Rubio has been helped out of personal and campaign debt by another one of his Jewish billionaire supporters, Norman Braman, a Miami businessman, who is expected to contribute $10 million to Rubio. According to the Times, Braman has only asked for favors on the level of state aid for cancer research. The key may be what the Times added as an afterthought, that Braman has “an ardent commitment to Israel,” as does Singer, Rosen, Adelson …

Perhaps many in the RJC, in a time of Israel’s vulnerability, want to be an Eddie Jacobson to the next president. Jacobson was President Truman’s business associate back in Missouri. The story is told in the Truman Presidential Library online: It was 1948, the State Department was withholding support, and “President Truman’s friend Eddie Jacobson walks into the White House without an appointment and pleads with Truman to meet with Chaim Weizmann, the president of the Jewish Agency for Palestine and the World Zionist Organization. Truman responds: ‘You win, you baldheaded son-of-a-bitch. I will see him.’”

That’s the payoff many in the RJC are looking for.