Google.com’s logo has quickly become one of the most recognizable corporate logos. It also has been changed more than any other logo, sometimes even daily.

According to the Wikipedia entry, "The current official Google pop logo was designed by Ruth Kedar, and is a wordmark based on the Catull typeface. The company also includes various modifications and/or humorous features, such as cartoon modifications, of their logo for use on holidays, birthdays of famous people, and major events, such as the Olympics." When Google adapts its logo for special occasions it is called a "Google Doodle." I was curious to know whether Google would honor Israel yesterday on its 62nd anniversary of statehood with a special Israel-themed Google Doodle.

Well, it did and didn’t. There was no Israeli Google Doodle on the U.S. Google search engine site, but the Israel version of Google featured a Google Doodle with an Israeli flag (pictured).

The first Google Doodle was in honor of the Burning Man Festival in 1998. The doodle was designed by Google founders Larry Page and Sergey Brin, who were attending the Burning Man, as an "out of the office" notification.

Israelis are already familiar with Google Doodle because of the Doodle 4 Google competition in 2008. Google Israel invited first to 12th grade students to reinvent Google’s homepage logo around the theme "My Israel" for Israel’s 60th anniversary. Google Israel received thousands of wonderful doodles and chose 40 drawings which would go on to the next stage. The winning doodle, selected from over thousands of entries, was created by Ilona Flaxsman, an 11th grader from Givatayim. 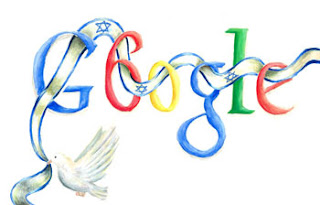 Ilona’s doodle graced the Google Israel homepage on June 30th, 2008. Ilona described her Google Doodle on the website: "My picture has simple symbols that everyone is familiar with. A white dove, known for bringing peace, and the flag with the colors that make it distinctive. The fact that we have a country that is 60 years old is testimony to many things (strength, hope, unity…). And what remains to achieve is peace. We all hope that some day a white dove will fly bearing witness to this."

Another Google Doodle for Israel appeared on Israel’s version of the search engine in 2008 for Israel’s 60th birthday and had an Israeli flag with the number 60 replacing "oo" in "Google" behind the flag. It’s reprinted on the Googlified blog in which the blogger adds the Wikipedia definition of Yom Haatzmaut (Israel Independence Day) followed by the phrase "Now talk about being controversial."

Hopefully in the future Google will pay tribute to Israel on her Independence Day with a Google Doodle on the U.S. version of the Google.com website too.
read more: