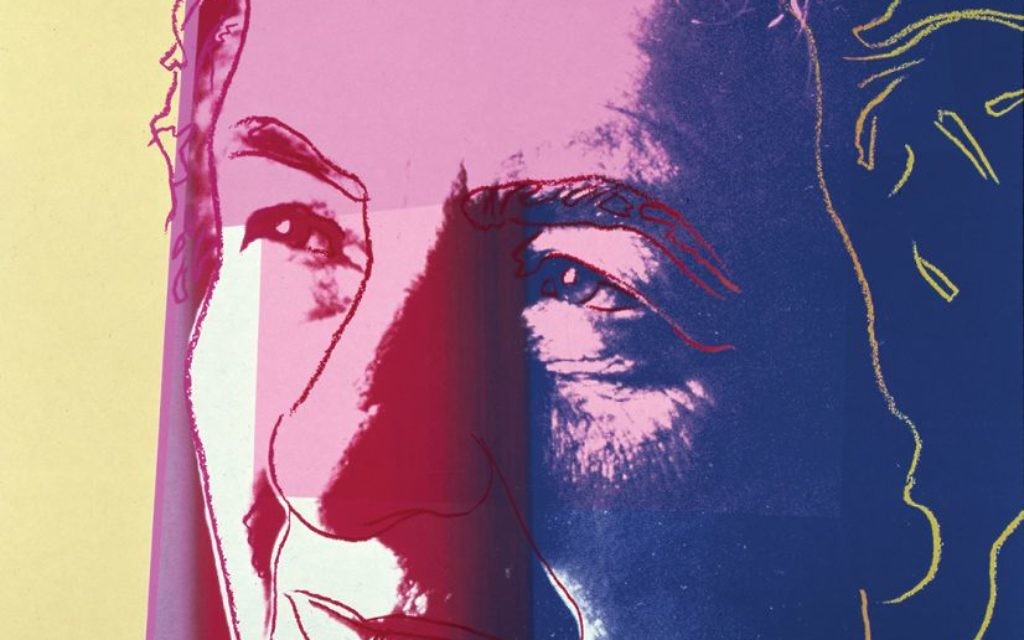 ‘Thank you for remaining Jews,” Golda Meir told the huge crowds that surrounded her when she visited a Moscow synagogue in 1948, after she had been named Israeli ambassador to the Soviet Union.

Recognized internationally by her first name, Israel’s fourth prime minister and the first and so far only woman in that role, was much admired and is remembered for her tough-as-nails, pragmatic, persevering approach, her love of Israel, her wit, her grandmotherly bearing and a certain charm born of all that.

Andy Warhol painted her portrait, and so did the Russian-born American painter Raphael Soyer. Both of these works are featured in “All About Golda,” an exhibition at Temple Emanu-El’s Herbert and Eileen Bernard Museum of Judaica. Warhol’s 1980 painting features a large photo image of her familiar face with a sketchy overlay and large swaths of color. Soyer’s 1975 portrait — on loan from the National Portrait Gallery at the Smithsonian — of a seated Golda in a blue print dress is softer, more soulful. A third portrait, by Israeli caricaturist Hanoch Piven gives her a mane of steel wool, a chicken leg and thigh as nose, with her face held in one of the sensible oxfords that have come to be known in Israel as “Golda’s shoes.”

The three portraits are part of a multi-layered and complex view of Meir presented in something of a Goldapalooza this season at the Skirball Center, with lectures, classes, special events and live performances of “Golda’s Balcony” with Tovah Feldshuh. A double-decker tour bus traversing the city is plastered with ads for the “All About Golda” happenings.

Gady Levy, executive director of the Temple Emanu-El Skirball Center, explains that he was inspired to undertake the Golda project when he realized how many people have forgotten about “Israel’s Iron Lady.”

“At a moment when America seemed on the cusp of electing its first female president, how could we NOT ask New Yorkers to focus on Golda. Think about it: The first woman head of state in the Western world was an original, a pretty hard act to follow.”

Well-curated with a wide reach, “All About Golda” chronicles her dramatic life story, from Ukraine to the American Midwest, Milwaukee to the Mideast. The photographs, portraits, recordings, commemorative coins and other objects include a silver presentation box that was a gift from Anwar Sadat in 1974 (and probably held her cigarettes, according to her grandson); the oldest-known photograph, of a 4-year-old Goldie Mabowitz with the beginnings of a serious gaze; her yearbook from Teacher’s College, Milwaukee, “The Echo,” when she served as vice-president of the junior class (acquired on eBay); and the only photograph in which she literally has her hair down, in a scene in a Poale Zion (Workers of Zion) pageant in which she dramatically holds a menorah in a 1919 production of “The Jewish Rebirth.”

She married Morris Meyerson in 1917, securing a promise that they’d move to then-Palestine, and there’s a facsimile of her immigration card when they arrived in Haifa in 1921 and a photograph of her later that year feeding the chickens at Kibbutz Merhavia. In photographs with David Ben-Gurion’s first cabinet, she looks like the no-nonsense, willful and determined politician she grew to be. The only woman at the table, she has her of-its-era pocketbook at her feet. In one view from the early 1960s, when she and Ben-Gurion are speaking, she has the hint of a smile, but mostly she is somber. Of her many trips to the U.S., she is seen with President Kennedy in 1962 and Mayor John F. Lindsay in 1969, when he presents her with the keys to New York City.

The most striking photos are taken by Israeli photographer Micha Bar Am, showing Meir as prime minister, at her desk, holding her head in her arms in 1969; in Sinai with a group of Bedouins and walking between the two columns of a military honor guard, both in 1970. His photos capture emotion and an edge of the unexpected.

One corner of the gallery is given over to a reproduction of her Ramat Aviv kitchen, with its cabinetry, tiles and stove based in scale and style on photographs. There, she was known to host many guests as well as meetings of her inner circle on Saturday evenings before full cabinet meetings, with debates around her kitchen table.

Golda’s recipe for chicken soup, featuring the usual mix of ingredients plus a pinch of paprika, is available on printed cards. At the opening last month, cups of Golda’s golden brew were served.

The show depicts a remarkable, trailblazing life but does not address head-on the question of her culpability in the nation not being prepared for the Yom Kippur War and the challenges of her personal life. Warren Klein, curator of the museum, says that he struggled with those questions, and, since gallery space was limited, took up some of those issues in other aspects of the related programming. Sarah Diamant served as co-curator.

Klein explains that after an event featuring Gideon Meir, one of her grandsons, a musician who shared stories and music, a man waited in a long line to “to let me know that he was a solider during the Yom Kippur War and that neither himself nor anyone in his regiment blamed Golda for the mistakes of that war. He said that he knew her generals misled her. I was so touched by this because it seemed as though he had been waiting over 40 years to get this off his chest.”

Upcoming ‘All About Golda’ Events

On Dec. 8, Jewish Week columnist Francine Klagsbrun moderates a panel discussion, “Golda: The Retrospective,” featuring people who worked with her, researched her life and achievements, and her grandson who founded the Golda Meir Institute for Leadership and Society. Yehoram Goan will give a special performance. 7 p.m.

On Dec. 11, Tovah Feldshuh revives her performance in the award-winning one-woman show, “Golda’s Balcony,” 3 and 7 p.m.

On Dec. 19, biographer Elinor Burkett speaks about “Golda,” with recordings of rare interviews of Meir, 6:30 p.m.

And readers can win a trip to Israel in a Golda sweepstakes — participants photograph a Golda action figure in any setting and post it; see GoGoldaGo.com for details. All events take place at the Temple Emanu-El’s Skirball Center, 10 E. 66th St., Manhattan.