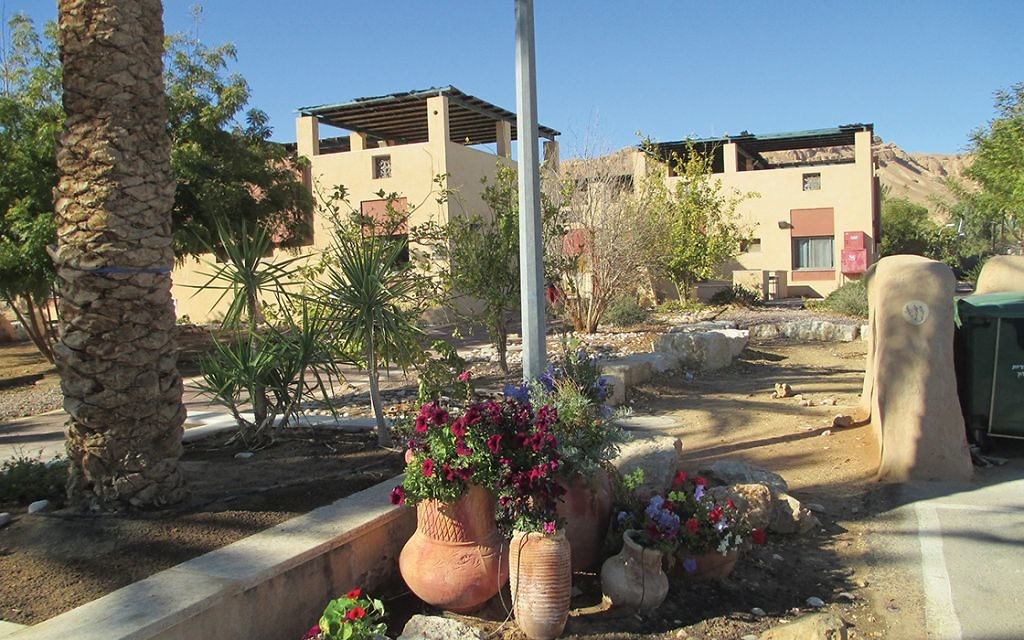 Deep in the Arava desert, 31 miles north of the resort of Eilat, stands a kibbutz where American tourists are guaranteed a familiar welcome. That’s because this desert oasis, Kibbutz Ketura, was founded by members and graduates of the American youth movement Young Judaea — and 42 years after its establishment they still leave a strong imprint.

The kibbutz synagogue follows the traditions and tunes of many American congregations, its dining room gives a nod to the U.S. palate, and between desert-dweller conversations about irrigation, date-packing and the like, Americans will recognize a range of subjects being discussed around the place, from American football to “Game of Thrones.”

The kibbutz guesthouse is unpretentious, but comfortable enough to get a bit of the kibbutz experience and a chance to explore the desert. The rooms are simple yet clean, with a kitchenette, bathroom and shower, satellite TV and a refrigerator. There is a charming café area where you can order good coffee, local beer, and buttery cakes. If you’re prepared to leave the luxury-hotel circuit for something a bit different, it’s well worth the journey. And there’s a great sweetener awaiting if you go in the winter: with a similar climate to Eilat, it’s far warmer than the rest of Israel and could well provide you with some winter sun.

You can eat meals in the kibbutz dining room, which — unlike on many kibbutzim that have become much more home-oriented — is still in heavy use, and you can take advantage of kibbutz facilities like the swimming pool. Venture out and explore the region, whether nature reserves or the attractions of Eilat, or spend time with your partner or family in the quiet of Ketura.

The best part of the Ketura experience is undoubtedly the scenery, which is just remarkable, with the sandy ridges all around. At sunset, the light plays with the sand to create various colors. Take a walk and explore, and then find your way back to the kibbutz by following its lights.

The kibbutz is a hub of ecological activity, and is home to the Arava Institute for Environmental Studies, as well as the first major solar field in Israel — an impressive sight. It is interesting to get a sense from a kibbutz member of the range of initiatives that the kibbutz runs, from date factories to an algae factory and a fish hatchery. While the communal structure of many kibbutzim is deteriorating, Ketura’s remains strong. Half of the kibbutz population is comprised of native English-speakers, so you’ll have no language barrier. What’s more, you’ll leave not only having enjoyed some desert relaxation, but also inspired by what idealistic Americans can achieve in Israel.

Indeed, there are many remote areas in Israel that have huge appeal, and some of the major hotel chains have been getting in on the act. The Isrotel Exclusive Collection, for instance, boasts the Beresheet hotel that overlooks the remarkable 25-mile-long Ramon Crater.

The Galilee is also full of tourism gems. You can go for a hotel with a rural feel, such as the Hacienda Forest View, a relaxed countryside getaway located on some 17 acres in the heights of the Western Galilee 12 miles east of Nahariya. Or you can go down the route of “zimmers,” meaning small-scale holiday rental operations, often run by single families. The right zimmer can give you a truly fantastic stay with a very different vibe than a big hotel, but some are highly disappointing. In June, I found myself in a complex of zimmers on a Galilee kibbutz. There was a malfunctioning refrigerator and mold in the bathroom, and nobody on-site who could help. Personal recommendation or trustworthy review is the best way to avoid situations like this — or you can use the website Airbnb and find places that have been rated by other visitors.

For tried-and-tested hospitality in the Galilee, you may consider Kibbutz Lavi. Three decades before Young Judaeans set up Ketura, British youngsters who belonged to the Zionist Bnei Akiva youth movement set up their kibbutz, just west of Tiberias. They were driven by the dream of settling the Galilee, of making it bloom, and of building what they deemed a model Modern Orthodox society just a few miles from where much of the Palestinian Talmud originated.

Today, Lavi has crops, dairy cows, orchards and chicken coops, and runs various educational endeavors. Its furniture factory is one-of-a-kind: it makes furniture for synagogues and ships worldwide. And its hotel offers an unusual tourism experience. Instead of the popular model of kibbutz hotels, which are run by hired staff, the Lavi hotel is still very much a kibbutz enterprise, where the kibbutz members do the work. And as they are religious — Modern Orthodox — on Shabbat they observe Sabbath laws, wearing Shabbat clothes and turning off phones and computers; a great sense of peace descends on the place on Friday at sundown. Tourists feel well taken care of by the kibbutzniks, but also feel a certain kinship with their hosts, who are celebrating Shabbat with them.

One thing that makes tourism in remote locations such a pleasure in Israel is that remote never really means far away from the center of the country. Yes, the Galilee feels like a different world than Tel Aviv, but it’s only a one-and-a-half-hour drive, and Ketura, a long drive away from Tel Aviv in Israeli terms, is a quick four-hour road trip for a U.S. driver.