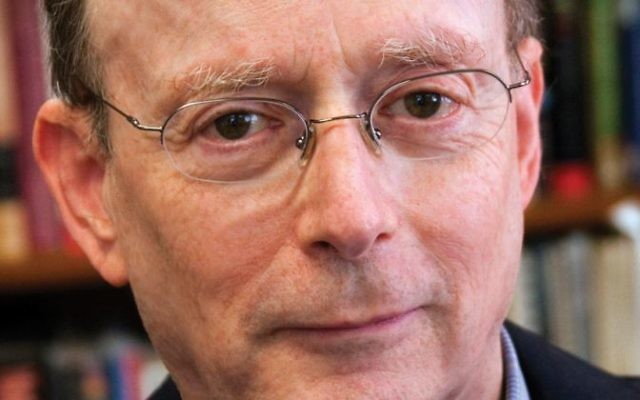 Sadly, the latest book from Rabbi Jonathan Sacks, former chief rabbi of Great Britain and widely admired around the world as a leading Jewish thinker, is all too timely.

It’s called “Not In God’s Name: Confronting Religious Violence” (Schocken Books), and it deals with precisely the kind of hatred expressed by Sheik Muhammad Sallah of Gaza, who recently urged Palestinians in the West Bank to stab Jews. “Stab the myths of the Talmud in their minds. … Stab the myths about the Temple in their hearts.”

Clearly, the hatred at the core of such exhortations is religious, not political; the enemy is not just Israel, it’s Jews. And the message is painfully familiar, to the point that we no longer respond with shock to the ongoing hateful, anti-Semitic rants of Friday sermons by sheiks or to the Palestinian media, with newspaper headlines and cartoons for children on television that portray Jews as pigs, and worse. Palestinian Authority President Mahmoud Abbas calls for calm one day and tells his people the next that “every drop of blood spilled for Allah” is “clean and pure.”

The violent attacks by Arabs on Jews in recent weeks have been different from the past two intifadas, at least until now. The assailants, for the most part, have been lone young men and women, not sophisticated militant groups. The weapons have been knives and other primitive instruments, not bombs. And the motivation has not been “the occupation” or “the settlements” but the false belief that the Israeli government plans to allow Jews to pray on the Temple Mount. (Why Israel decided, just after the 1967 War, to ban Jews from Judaism’s holiest site speaks to its desire to avoid a religious war between Jews and Muslims.) Further, the assaults have been as primitive as the first human interaction between the children of Adam and Eve in the Bible, the slaying of Abel by his brother Cain.

All these centuries later, the children of Abraham shed their cousins’ blood with a vengeance, literally.

Have we made any progress over thousands of years, with countless wars carried out in God’s name in what Rabbi Sacks calls acts of “altruistic evil,” violence carried out by the followers of one religious tradition against those of a different belief? Far too often, whether the aggressors were Christians or Muslims, the victims were Jews.

In his book, Rabbi Sacks decries a 21st-century Mideast where loving God has come to mean hating God’s enemies, an Us vs. Them climate that finds ISIS committing beheadings and crucifixions in the name of Allah.

Witnessing such acts, the rabbi said in an interview here the other day, reminds him of God’s reaction, cited in Genesis 6: 5-6, on seeing man’s “wickedness.”

“And the Lord regretted that He had made man on earth, and His heart was saddened.”

In his book, a work that began more than a dozen years ago, Rabbi Sacks offers a deep and creative interpretation of stories of violence in the Bible, with an emphasis on the sibling rivalries in Genesis, including Cain and Abel, Isaac and Ishmael, Jacob and Esau, Rachel and Leah, and Joseph and his brothers.

“This book was not written for Jews primarily, but for Christians and Muslims — one that they could read without feeling that they were being put on the defensive,” he told me. He offers an alternative reading of key Bible stories to correct what he considers the common interpretation that there are clear favorites among the siblings. He asserts, for example, that Ishmael, the firstborn son of Abraham and father of the Arab nation, was not rejected by God.

The rabbi hopes his book will be “the beginning of a conversation to show Christians, Jews and Muslims that we can create a new path. You have to construct a politics of hope,” he said, “if you want to defeat the politics of fear.”

Imam Abdullah Antepli, the founding director of Duke University’s Center for Muslim Life and a self-described member of the “moderate Muslim majority,” agrees with the rabbi’s thesis that while Christian anti-Semitism is rooted in its theology, anti-Semitism entered Islam from the outside and only recently.

The imam, who was born in Turkey and came to the U.S. at the age of 30, said he was raised in a secular, very anti-Semitic home, and became an avid student of Judaism after he studied the Koran and came to believe that anti-Semitism was not authentic Islam.

He has not yet read the new Rabbi Sacks book but, informed of its close readings and reinterpretations of biblical rivalries, he told me that the problems with Islam’s view of Jews today are “historical, cultural and political, not primarily theological.” He went further in suggesting that Rabbi Sacks’ “esoteric” reading of biblical events are “irrelevant,” given the nature of the current political conflict over Israel.

Imam Abdullah compared the Muslim-Jewish relationship to a couple’s attitudes toward each other after a painful divorce, forgetting all the positive memories and focusing on the current bitterness. He noted that while the Muslim-Jewish relationship was never “rosy,” in centuries past there were long periods of Muslim tolerance of Jews in their lands. This reality is completely overshadowed by the events of 1948, he said, when the state of Israel was created and perceived as the usurper of Arab land.

Imam Abdullah decried the current forms of anti-Semitic violence as “horrific and growing” among Muslims around the world, and noted that “the silence of lazy Jewish, Christian and Muslim moderates empowers the crazies.”

Rabbi Sacks is hopeful that his book can help foster religious understanding, beginning with leaders of the three respective faiths, and can be transmitted to their adherents around the world. He insists that “the use of religion for political ends is not righteousness but idolatry” and that “to invoke God to justify violence against the innocent is not an act of sanctity but of sacrilege.”

Anyone who believes that man was created in God’s image should promote the rabbi’s thesis. The future of world events may well depend on the success of efforts to convince Islamic fundamentalists that God’s “heart is saddened,” not satisfied, by their bloody acts of hatred.