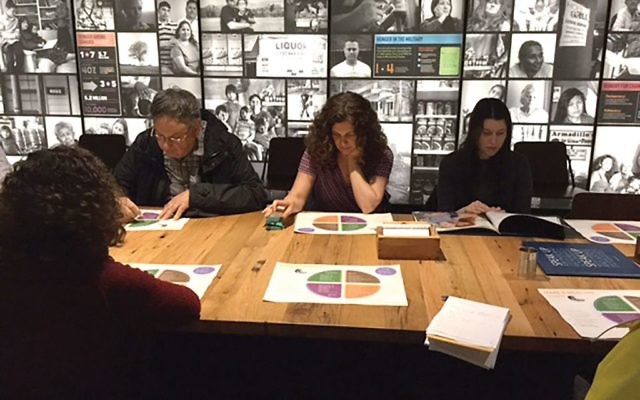 The exhibit invited participants to plan meals based on a limited income. Photos courtesy of Mazon

Try putting together a healthy, well-balanced and nutritious meal for $1.40. Stumped? Then imagine what it’s like for those who have to manage within those limits.

That was one of the interactive challenges posed to visitors at Mazon’s “This is Hunger” exhibit that was at Mamaroneck’s Westchester Jewish Center earlier this spring.

The exhibit, housed in a 53-foot-long, double-expandable semi-trailer, features black-and-white photos, as well as stories from some of the 42 million Americans who struggle with hunger and food insecurity. According to the U.S. Department of Agriculture, nearly 13 percent of households had difficulty providing food for their families during the past year. As part of the experience, visitors hear and see stories directly from those suffering from hunger, attempt to compose a meal and are urged to become advocates to reduce the problem.

“Westchester has a significant Jewish community that is highly engaged in social justice work, so it made sense to make sure that ‘This Is Hunger’ stopped there,” said Michelle Stuffmann, director of outreach and communications for Los Angeles-based Mazon. “When we formally announced the tour, Westchester Jewish Center was one of the first congregations of all Mazon’s synagogue partners to express interest,” she added. “They showed just the kind of passion and commitment we seek in all our partners, so we were thrilled to bring them on as official hosts.”

Despite its affluent image, more than 8 percent of Westchester residents have food insecurity; 14.4 percent of children experience food insecurity in the county. Recognizing that it’s not an “out there” problem, but one that affects neighbors and nearby communities, motivated WJC to host Mazon: The Jewish Response to Hunger’s traveling exhibit.

“The synagogue community is recognizing social action as a spiritual connection,” said Shoshi Rosenbaum, director of teen engagement at Mamaroneck’s Westchester Jewish Center. “People really get connected to the synagogue through social action.”

Launched last fall in Los Angeles, the exhibit is touring the country through the end of July.

Visitors to the space sat in a room that gradually darkened, as projections of those affected by hunger spoke about their experiences. The stories were sobering. A teenage boy spoke about how “going to bed hungry keeps you from sleeping.” A senior citizen said that she had to choose between taking medication or eating, and how “senior meals are a blessing.” A younger Hispanic woman with three children admitted “food stamps don’t last the whole month.”

Perhaps most poignant of all was the comment of an older woman, who said, “I never thought America would be like this.”

Much of the exhibit’s power was in dismantling myths about who in America goes hungry. “We often think of hunger in stereotypes, such as the homeless person walking down the street, but the reality of hunger in Mamaroneck is much more complex,” said WJC education director Aleza Kulp. “We want to help everyone understand that those who are hungry can be your neighbor who just lost her job or the teenager at school who can’t concentrate properly because he isn’t eating enough nutritious food at home.”

As Rosenbaum said, what really affected the teens, though, was recognizing “the work they’ve been taught to do — volunteering, not wasting food — only solves about 5 percent of the hunger problem. That was really shattering to them.”

One of the key lessons was showing sixth and seventh grade students what it meant to compose a balanced meal on just $1.40. Although “a lot of it went over the students’ heads,” said Kulp, “as an education program I thought it was fantastic. They know what a balanced meal is. Learning that it’s more important to fill their stomachs than eat something healthy, rather than go to bed hungry, was very impactful.”

Eighth grader Jenna Ferraro, a member of WJC, said, “When I first walked into the trailer, I thought the exhibit was cool and moving before anything started. I realized how little I knew about hunger in the U.S. Once I started to make a meal, I was surprised at how expensive it was.”

For Sabrina Landau, early childhood director at Westchester Jewish Center, said the exhibit hit home. “This is definitely an emotionally charged topic,” she said. “We run food drives and toy drives, and want to know how best to address these issues with children in the schools and their families.”