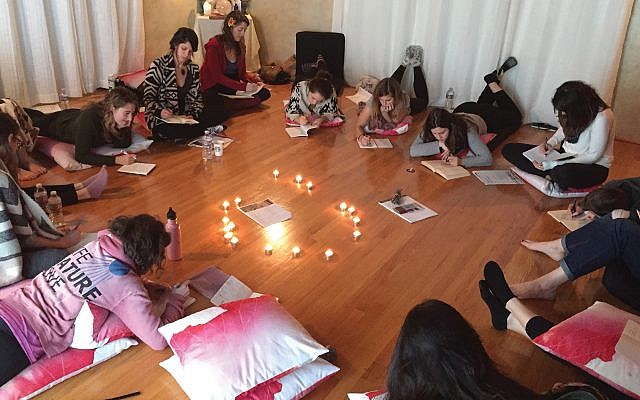 Body and soul cycle: A recent At the Well gathering. Courtesy of Sarah Waxman

Sarah Waxman always knows when she’ll be celebrating Rosh Chodesh, the Jewish lunar calendar’s monthly holiday marking the new moon. She also knows precisely what day it is in her menstrual cycle.

In fact, she can’t imagine living a healthy, spiritual, meaningful Jewish life without these tools.

“Anybody who doesn’t know it’s the Hebrew month of Adar right now is missing out,” Waxman, 32, told The Jewish Week. “We’re supposed to spend Adar leaning toward joy, which is an incredible opportunity. There’s a beautiful framework in the Jewish calendar to make sense of a range of emotions, and to provide us with spiritual growth points. How can you navigate your day — or your life — if you literally don’t know where you’ve come from and where you are now?”

Likewise, menstrual tracking and going to a mikveh, a ritual bath, have been revitalizing for her. “Tracking my cycle as a way to understand my health and connect with my Judaism has put a divinity in my body,” she asserted, pointing out that it is primarily Orthodox Jews who observe the laws of niddah (purity). “We have these ancient rituals that aren’t talked about, invested in or within reach for the full spectrum of Jewish people.” 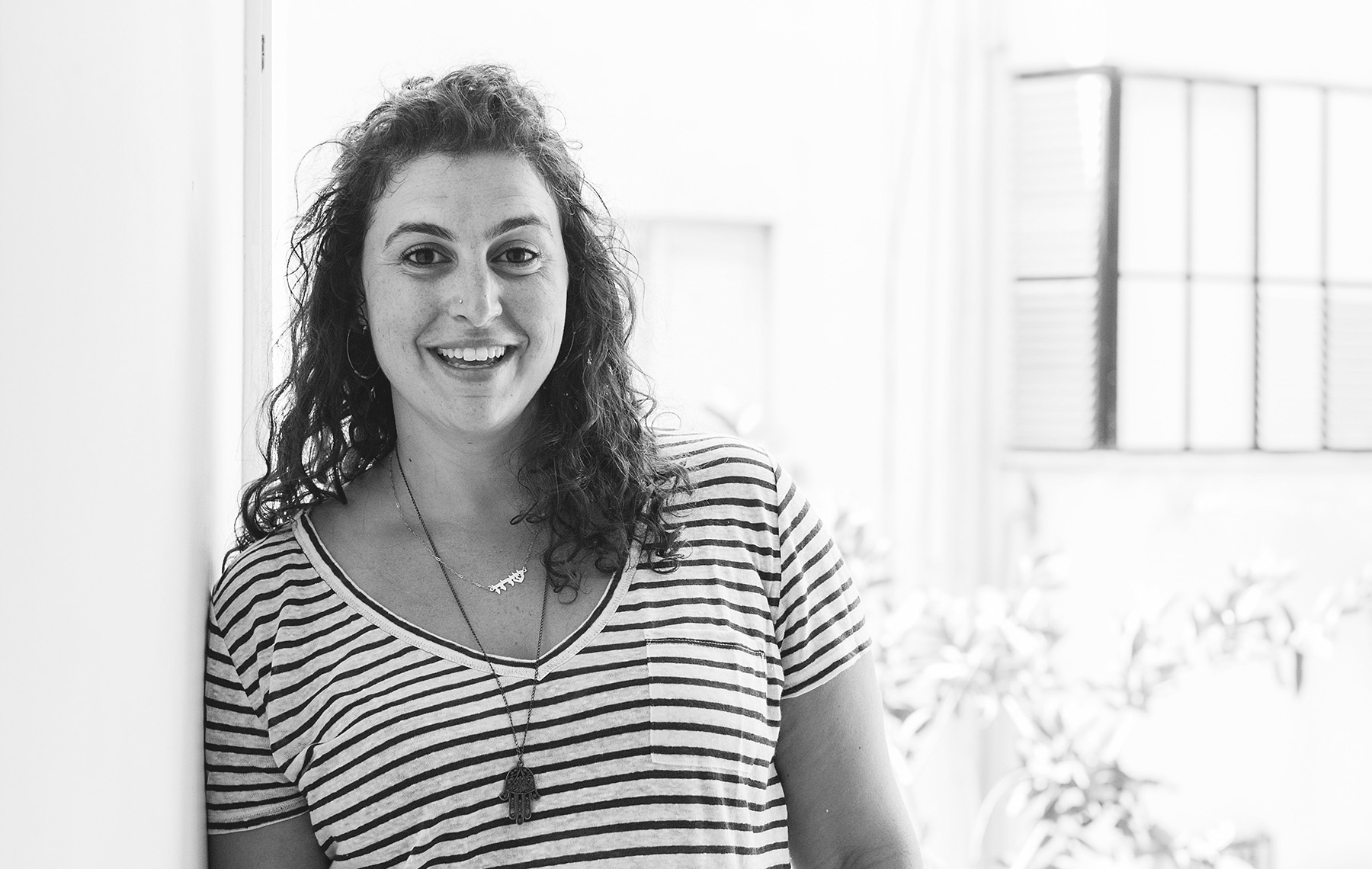 At the Well founder Sarah Waxman is looking to “unify the practices of health and holiness.”
Courtesy of Sarah Waxman

Waxman, who founded a nonprofit called At the Well, is committed to changing that by giving more women access to practices that she said “unify the practices of health and holiness.” Since launching At the Well in 2015, Waxman, who splits her time between New York City and San Francisco, has helped create and offer resources for about 150 “Well Circles”— women’s groups of all denominations that celebrate Rosh Chodesh and support each other as a close-knit community — in eight countries across the globe.

Now, Waxman, whose organization has received more than $1 million from individual donors, the Jewish Women’s Foundation of New York and the Jewish federations in Los Angeles and San Francisco, is working to expand to “hubs” in New York, Los Angeles, San Francisco, Detroit and Tel Aviv, where staffers and volunteers will look to grow the organization and increase programming; a new “content manager” will be based in New York starting next month.

“I started At the Well because I needed it,” said Waxman, who felt disconnected from the Judaism of her childhood, and isolated despite her bustling social calendar and work as a yoga and mindfulness teacher in schools. “I was going to a lot of events where people used the word ‘community,’ but I still felt alone when I got home,” she explains. She confided in a friend, who explained what a women’s Rosh Chodesh circle was, and suggested they form one.

“I was like, ‘Why are you talking to me about our relationship to the moon?’” recalled Waxman. “Even though I grew up in a Jewish home, celebrated Shabbat, went to Hebrew School and Jewish summer camp, I had never heard of Rosh Chodesh in my whole life. Buddhism and Hinduism were more accessible to me than this ancient Jewish practice that I was hearing about for the first time. I don’t even think I knew what it meant to be both spiritual and Jewish.” 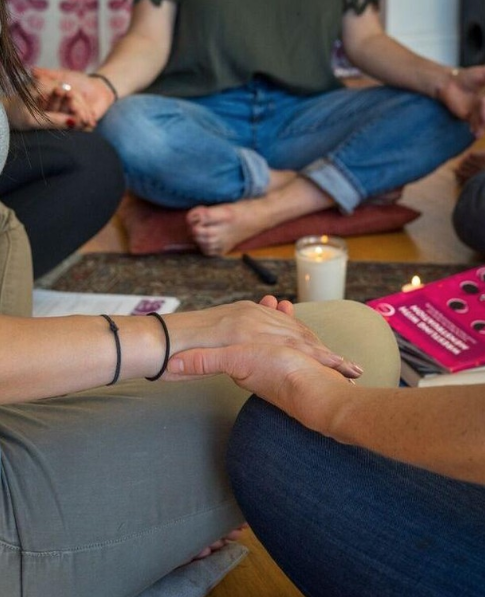 Coming together at community event organized by an At The Well local chapter. Instagram/atthewellproject

After learning that Rosh Chodesh was the first holiday the Israelites were commanded to celebrate after being freed from slavery, Waxman was intrigued. She and her friend decided to organize a group of women to meet monthly in each other’s homes to access spirituality through a Jewish lens by marking the new Hebrew month, and create a sense of community based on a shared commitment to participate, collaborate and facilitate.

“It was transformative,” said Waxman, who was living in Washington, D.C., at the time. “I found a place of belonging. I was learning about Judaism with a group of people who wanted to do it with me. We were all committed to personal growth within community. Within three months, I was feeling better.”

She learned, for example, that her hormones changed daily, and if she was armed with knowledge about her body, she could better support herself. “I had experienced depression for decades, but nobody ever taught me to track my menstrual cycle to understand my hormones and my mental health. Now I know that if I’m feeling low on day 28 of my cycle, I’m just being human!”

After devouring all she could about Rosh Chodesh and niddah, and realizing how impactful these practices could be for other women, Waxman had what she called her “Queen Esther moment.”

“I realized I was the right person at the right time to do something that had the power to solve major problems in women’s physical, mental and emotional health,” she said, drawing a parallel to the heroine of Purim who took on the responsibility of saving the Jewish people from destruction.

Using At the Well’s millennial-friendly lingo, Waxman calls Queen Esther her favorite “biblical babe,” whom she thinks about daily. She explained, “I love the way she organized community around her, how she anointed herself with oils and fasted to prepare her body and mind, how strategic she was about her strength and her beauty, how she looked at a problem and figured out how she could uniquely solve it.”

So that’s what Waxman set out to do, helping other women to be healthier and more connected — to themselves, to their bodies, and to the Jewish community. She started by creating a newsletter with materials for women to create their own “Well Circle,” her own updated version of a Rosh Chodesh group, with six to 12 women meeting monthly to mark the new Hebrew month, learn together and share their physical and emotional challenges.

At the Well’s website also offers Moon Manuals (free, in-depth resources with insights about each Hebrew calendar), and the organization released a book last year called “Wrestling with Menstruation,” which Waxman described as “a guide to the intersection of menstruation and Torah.”

“We call ourselves the People of the Book, yet the last book about Rosh Chodesh was written in the year I was born,” she remarks, pointing out that more than 40 other women have contributed to the website’s content.

At the Well has also planned events, including a women’s health and Jewish spirituality summit called Timbrel, and added several product lines such as scarves based on “biblical babes”: Hannah, Esther and Miriam. Looking ahead, Waxman speculated, “I think there’s a Queen Esther beauty line waiting to happen!”

In the meantime, thousands of women have been inspired by At the Well to embrace a Jewish approach to wellness.

“At the Well takes traditional teachings and makes them totally accessible,” says Ellie Burrows Gluck, a board member who recently hosted an At the Well event at MNDFL, her New York City-based meditation studio. “It is making an undeniable contribution to how Jewish women share, care and can be there for themselves and each other.”

Hannah Roodman, 29, uses At the Well’s resources for her Brooklyn-based Well Circle with seven women. “It is a grounding force in my life more than anything else,” says Roodman, who lives in Crown Heights. “It’s very nourishing for me, especially as someone who doesn’t make it to shul regularly.” 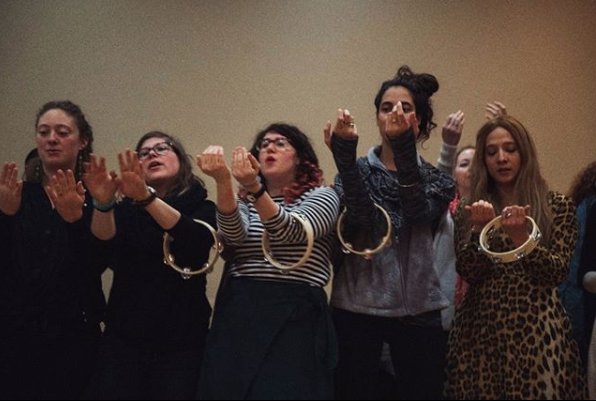 Arielle Braude, who first heard about At the Well through her work at Hillel International’s Office of Innovation, says the timing is right for the organization to thrive. “Wellness is such a buzzword,” said the 26-year-old. “People sign up for all these self-help gatherings and classes, but we don’t often think about how our tradition for thousands of years has built-in moments for self-care, community and sacred space. At the Well taps into that and makes it accessible to folks who are looking for it anyway.”

For Erika Eskenazi, 28, Well Circles — she belongs to two — are the bases of her most intimate friendships. “It’s a really safe place for women to share authentically about what’s going on for them,” she said. “We’ve had a lot of tears and a lot of laughs. We’ve been able to see each other through peaks and valleys in our life.”

Eskenazi, who plans to settle down in Tel Aviv after traveling in Southeast Asia for a few months, added, “I’m 5 million percent going to start a Well Circle there because it’s just part of my tradition now. I have a few different Jewish communities, but my Rosh Chodesh circle is definitely the one that resonates most for me. It’s most aligned with who I am and how I want to experience my Judaism. It’s one of my most sacred Jewish practices.”

With Purim just days away, Waxman continues to fully immerse herself in the month of Adar, channeling joy as often and deeply as she can, but she knows that the month of Nissan and Passover will soon compel her to shift her focus.

“I’ll be thinking about how I can move from narrowness to expansiveness all month, and how that might be connected to the seeds that I planted in Shevat,” she explained, citing the Hebrew month before Adar. “It’s amazing how Judaism gives us a strategy for connecting us to our ancestors, elevating our lives and navigating who we want to be.”