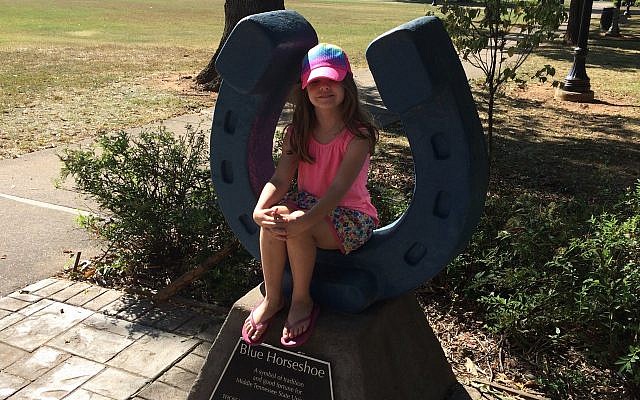 (JTA) — An 11-year-old Tennessee girl who told her classmates to stop making the Nazi salute was sent to the principal’s office, her father said in a tweet in which he asked the public to send her messages of support.

Keith Jacks Gamble, chair of the Department of Economics and Finance at Middle Tennessee State University in Murfreeboro, Tennessee, posted his request on Tuesday.

Gamble said that a student at his daughter’s McFadden School of Excellence in Murfreesboro was assigned to play Hitler for the school’s Living History project and to make the Sieg Heil salute. After students started to make the salute all over school, his daughter told them privately that she thought it was wrong.

At the final rehearsal for project, students returned “Hitler’s” salute, leading Gamble’s daughter to shout “Stop it, put your hands down!” His daughter was removed from the room for being “disrespectful,” according to a timeline Gamble posted in a screenshot on Twitter. She was then sent to the principal’s office.

“Each time, my daughter spoke out even though she was told by a teacher ‘not to address it.’ She has been bullied by classmates and targeted personally with Nazi salutes, so school feels lonely sometimes,” Gamble tweeted.

The screenshots show that a teacher told Gamble’s wife that their daughter was given “an open platform at that time to appropriately voice her concerns and share with her peers her feelings, then she was asked to not address it again.”

James Evans, a spokesman for Rutherford County Schools, said in a statement to BuzzFeed News on Tuesday: “The student was not disciplined or punished in any way for her concerns or actions. In fact, the school agrees the actions of the students were completely inappropriate.”

She was taken out of the room to calm down, according to the district.

Evans also told BuzzFeed that the school has decided that future projects will not include Hitler or the salute.

During the awards ceremony for the project, several students gave the salute when the student who portrayed Hitler went up to receive her award and were not reprimanded. When Gamble’s daughter accepted an award, she called on parents to talk to their children about why it is not right to make the salute.

Please comment with support for my 11-year-old daughter. She was removed from class and sent to the principal’s office for the rest of the day last Thursday for shouting, “Stop it, put your hands down now,” to a group of students giving the Nazi salute. pic.twitter.com/9d9LpI5V5r